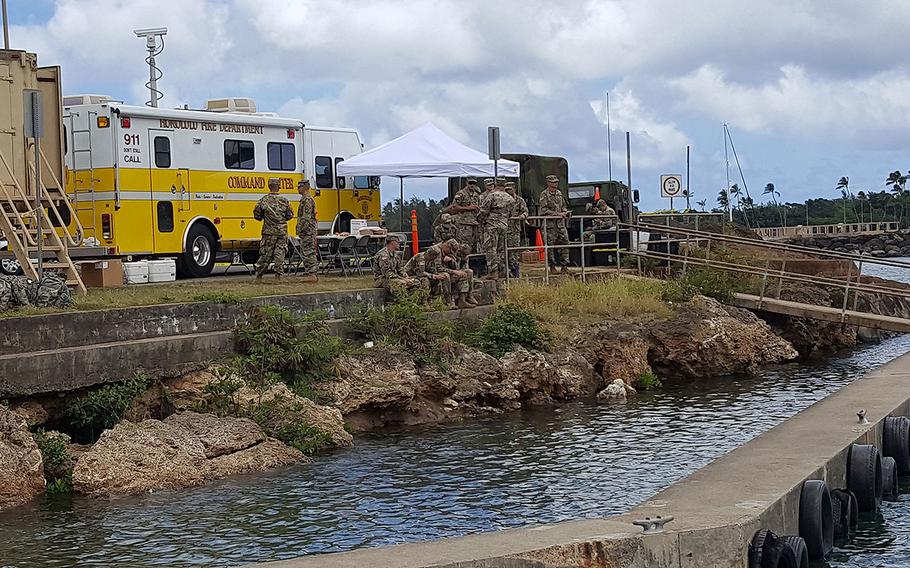 Buy Photo
Military personnel gather at the search and rescue command center on Wednesday, Aug. 16, 2017 in Haleiwa, Hawaii. Rescue crews were searching for five soldiers who were aboard an Black Hawk helicopter that crashed several miles off Oahu's North Shore late Tuesday. (Wyatt Olson/Stars and Stripes)

Buy Photo
Military personnel gather at the search and rescue command center on Wednesday, Aug. 16, 2017 in Haleiwa, Hawaii. Rescue crews were searching for five soldiers who were aboard an Black Hawk helicopter that crashed several miles off Oahu's North Shore late Tuesday. (Wyatt Olson/Stars and Stripes) 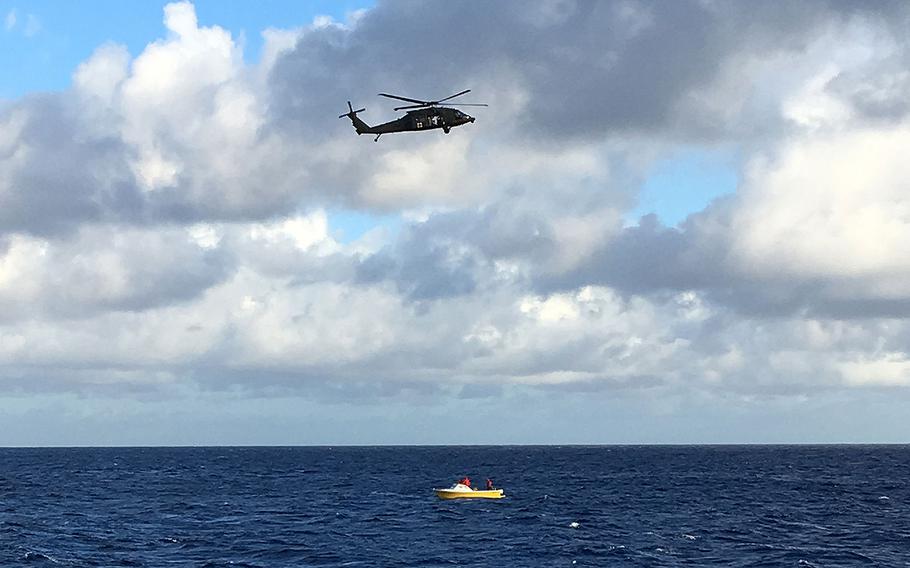 HALEIWA, Hawaii – Searchers spent Wednesday retrieving wreckage from an Army helicopter that went missing the night before about 5 miles off the coast of northwest Oahu; however, no trace of the five crew members had been found by mid-afternoon.

The Army had contacted family members of the UH-60 Black Hawk’s two pilots and three crew members, said Lt. Col. Curt Kellogg, a 25th Infantry Division spokesman, during a news conference at the search’s command center in Haleiwa Harbor. He did not identify the soldiers, who are with the 25th Combat Aviation Brigade based at Wheeler Army Airfield, Oahu.

“This is still a search-and-rescue operation,” Kellogg said.

Using computer modeling, the Coast Guard is determining how the currents in those waters would likely be carrying debris and surviving crewmen, Coast Guard spokesman Lt. Scott Carr told reporters.

The water depth under the debris field is 500 to 600 feet, said Capt. David Jenkins of the Honolulu Fire Department.

Air and sea vessels from the Coast Guard, Army, Marine Corps and Honolulu Fire Department have been searching for survivors and debris near Kaena Point since late Tuesday night.

The Black Hawk was one of two helicopters conducting routine night training. It lost radio contact with personnel at Wheeler Army Airfield at about 9:30 p.m., at which time the second helicopter made a preliminary search.

That helicopter then returned to Wheeler, where it picked up a second helicopter before returning to continue the search, Kellogg said.

The Coast Guard was called in at about 10 p.m., bringing with it an HC-130 Hercules plane, MH-65 Dolphin helicopter and 87-foot and 45-foot cutters. The larger cutter will continue to search overnight to Thursday, Carr said.

Marine Corps helicopters have also joined in the search.