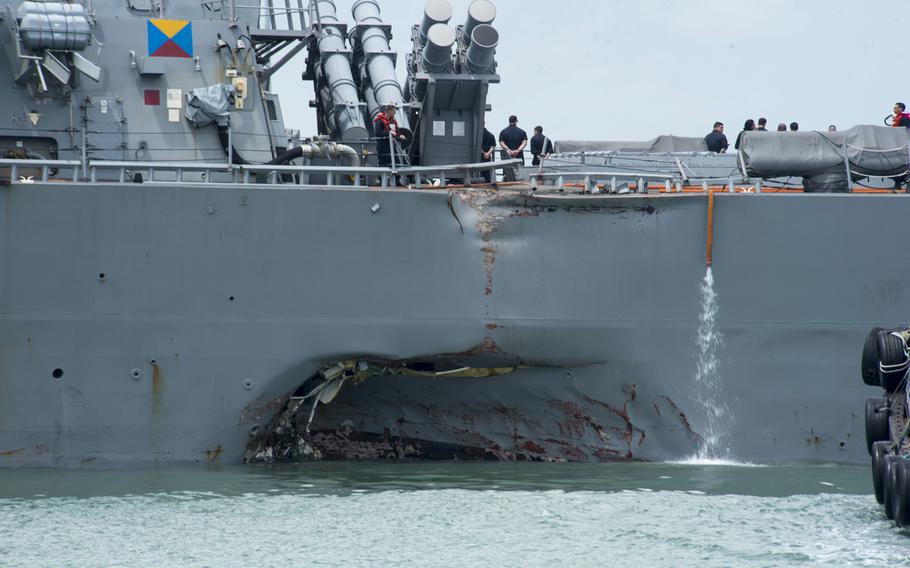 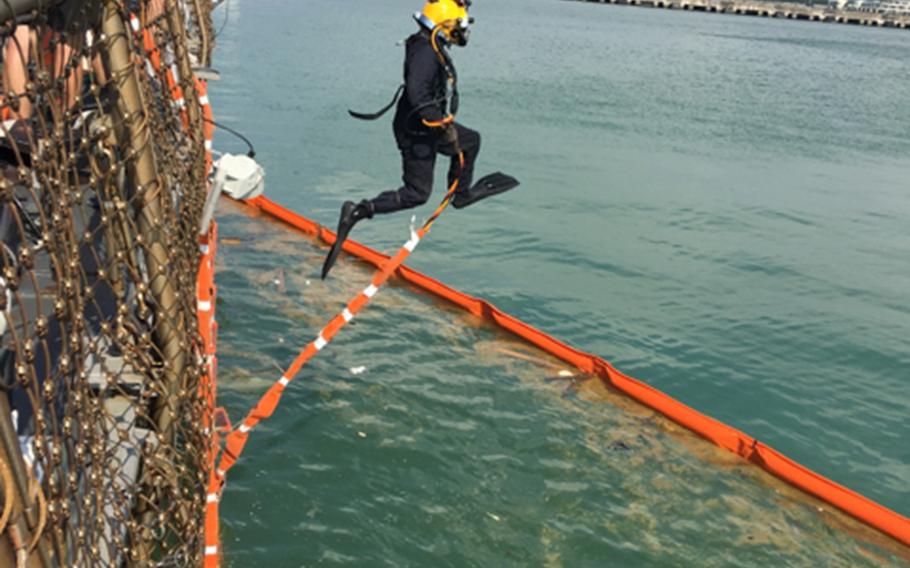 U.S. Navy and Marine Corps divers continued to search the ship for the missing sailors Wednesday. More divers were joining the effort Thursday and aircraft and vessels were deployed by the U.S., Singapore, Malaysia, Indonesia and Australia, the 7th Fleet said.

While the Navy has not released the names of the 10 missing sailors, five among the missing have been identified by their families.

Petty Officer 3rd Class Logan Palmer, 23, Decatur, Ill.: The interior communications electrician enlisted in the Navy in April 2016, according to a Navy spokeswoman. His family contacted U.S. Rep Rodney Davis, a Taylorville Republican whose district includes Decatur, to help monitor the Navy’s investigation.Petty Officer 3rd Class Kenneth Smith, 22, from Cherry Hill, N.J.: His mother, April Brandon, said that two officers visited her Monday in Milford, Mich., where she lives. Smith, whom she calls a “great kid” who wants to develop video games, grew up in Michigan, moved to Virginia during high school and later moved to Cherry Hill when his father, a naval officer, was transferred to the area, according to NBC News.Jacob Drake, 21, of Columbus, Ohio: Megan Partlow, 20, told The Straits Times in Singapore that her fiancé is among the missing sailors. Drake’s parents received a visit from a U.S. Navy representative, she said. The two are planning a July 2018 wedding.John Hoagland, 20, of Killeen, Texas: Cynthia Kimball told The Associated Press Wednesday that her son is among the missing. He served aboard the warship since October and she said she was told by the Navy on Tuesday evening that he was still missing. Kimball said her son worked as an electronic technician. He spent his early years living northeast of Houston.Dustin Doyon, Suffield, Conn.: In a statement late Tuesday, the family said they believe he is among the missing. Petty Officer 3rd Class Doyon is an electronics technician. The family said in the statement that they "appreciate the courageous work of the crew" following the collision and in the ongoing rescue efforts.The Yokosuka-based guided-missile destroyer was traveling to Singapore for a routine port visit early Monday when it collided with the Liberian-flagged Alnic MC oil tanker east of the city-state, injuring five sailors and leaving 10 missing.

During a news conference at Singapore’s Changi Naval Base, Swift said that Navy and Marine Corps divers discovered remains while searching sealed compartments in damaged areas of the ship. The Malaysian navy also discovered remains that could be one of the missing sailors.

“We have a report from the Malaysians … that they have found a body,” Swift said. “We are in the process of effecting the transfer of that body so we can start the identification process and determine whether it’s one of the missing sailors or not. We have discovered other bodies during the diving on McCain today. The divers were able to locate some remains in those sealed compartments during their search.”

Navy and Marine Corps divers from the USS America and Yokosuka Naval Base have been searching the McCain using surface-supplied air rigs to access sealed compartments, said a Navy statement issued earlier Tuesday.

Swift said search-and-rescue efforts by the U.S., Malaysian and Singaporean navies are ongoing.

“We’re always hopeful that there’s survivors,” the admiral said. “Until we have exhausted any potential recovering of survivors or bodies, search-and-rescue efforts will continue. We will continue the SAR operation until there’s a determination that the probability of discovering sailors is exhausted.”

Swift said the McCain had suffered “significant damage” to its port side aft. The admiral, who said flooding has been halted, praised the crew’s damage-response efforts and said the full extent of the damage is still being determined.

The destroyer’s watertight integrity was compromised and many of the ship’s spaces were flooded, he added.

“I visited with the crew today,” Swift said. “They are tough and they are resilient. It is clear their damage-control efforts saved their ship and saved lives. I was on McCain this morning looking at the eyes of those sailors. Even after their heroic efforts yesterday, I didn’t see exhaustion … I didn’t see a crew that was taking a knee. They are manning the USS John S. McCain. They own that ship.”

The McCain is the fourth Navy ship to be involved in a serious accident in the Pacific this year. In January, the USS Antietam ran aground and spilled roughly 1,100 gallons of hydraulic fluid into Tokyo Bay. In May, the USS Lake Champlain collided with a South Korean fishing boat while operating off the east coast of the divided peninsula. In June, a deadly collision between the USS Fitzgerald and a Philippine-flagged merchant ship killed seven sailors and injured three. The commanding officers of both ships were relieved from their duties.

On Monday, Chief of Naval Operations Adm. John Richardson ordered a service-wide operational pause and a broad review of naval practices in the Pacific in the wake of the latest collision.

Richardson told reporters at the Pentagon Monday that the string of accidents are “very similar” and have left Navy leadership with “great cause for concern that there is something out there that we are not getting at.”

Swift said the pause, which is being observed by all units in the Pacific, will be completed by Aug. 28. The admiral said he has spoken with the Navy’s most senior surface-warfare officer and is considering the possibility of links between the McCain collision and the other mishaps.

“One tragedy like this is one too many,” Swift said. “While each of these four events is unique, they cannot be viewed in isolation. We owe it to sailors and their families to answers the questions that flow from the uncertainty of what happened, how could it happen, and what can be done to prevent such occurrences in the future. We will conduct a thorough and full investigation into this collision.”

Swift added that he has ordered a second phase to the operational pause that will apply to all surface ships in the Pacific.

“This second phase will be a deliberate reset for our ships, focused on a number of areas such as navigation, ship’s mechanical systems and bridge resource management,” he said. “It will involve training and assessment by a team of experts with each ship and their watch standers and it will be phased in order to cover ships in port and at sea.”

The string of accidents involving 7th Fleet ships and the delayed deployment of the destroyer USS Milius to Japan has left 7th Fleet short three destroyers and a cruiser. Despite the loss of those vessels, Swift insisted the fleet is still capable of responding to threats in the Pacific.

“We have a deep bench,” he said. “I’ve got 140,000 sailors that report for duty in the Pacific Fleet every day. I have over 200 ships assigned to me; 60 percent of the United States Navy is assigned to the Pacific Fleet. I’m highly confident we can respond to any guidance or direction that may come to me from the president or the secretary of defense.”

The Navy has enough assets to make up for the out-of-commission ships, Adm. Harry Harris, head of U.S. Pacific Command, told reporters gathered Tuesday at Osan Air Base, South Korea.

“As far as the effect on our ability to defend the peninsula and our alliances in the region, I believe it will not have an effect,” he said. “The U.S. Navy is large, and we have a lot of capacity and we’ll bring that capacity forward if we need to.”

Swift said Tuesday evening that while he has so far not seen any evidence of a cyberattack, the Navy would still investigate that possibility.

“I’ve heard of these reports of potential cyberattacks or cyber interference … we’ve seen no indications of that as of yet,” he said. “We are not taking any consideration off the table, and every scenario will be reviewed and investigated.”