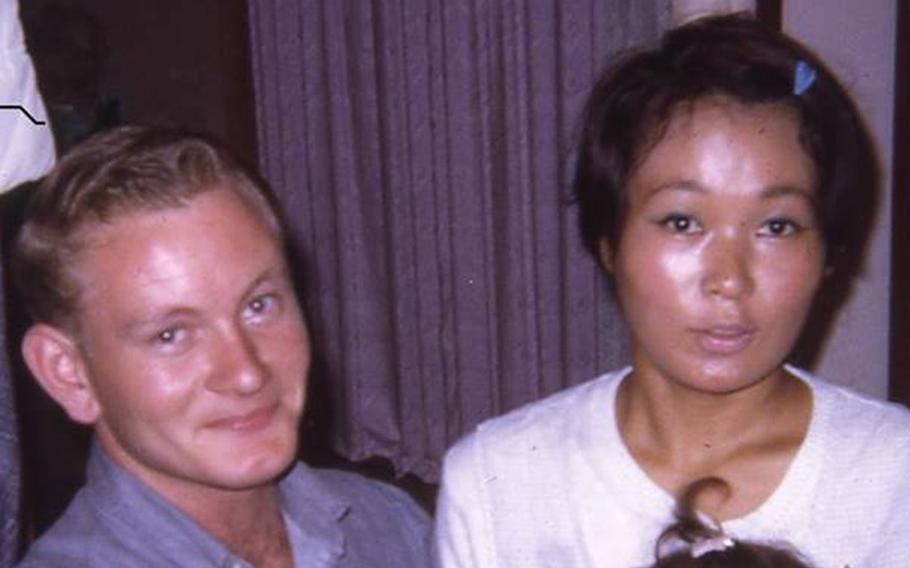 YOKOTA AIR BASE, Japan — It’s been 45 years since James Walker went to war in Vietnam, leaving behind his daughter and her mother in Japan.

The young sailor thought they’d be reunited once he got back from deployment on the aircraft carrier USS Oriskany. When the letters he wrote to his young family were returned marked “wrong address” Walker realized something was wrong. Almost four decades later, he’s still searching for them.

In 1967, when he arrived at Naval Air Facility Atsugi, Walker was 18 and fresh out of basic training. He started work as a mechanic with VR-21 — a squadron that flew Grumman C-1A transport planes delivering mail, supplies and personnel to the fleet.

The bright lights of nearby Tokyo were a world away from his hometown of Harrisburg, Ark., a close-knit farming community where his father worked as a carpenter. Back then, Atsugi was surrounded by fields, soon to be covered in houses, shops, factories and schools sprawling from the Japanese capital.

Tomie Hashimoto was wearing a kimono when Walker approached her in a Yokohama street. He was surprised when she answered him in English and gave him her phone number, and after a few dates, the pair fell in love. He visited her parents’ home near Yokohama several times and got on well with them despite the language barrier.

“They cooked for me,” he said. “You could tell they weren’t wealthy, but they seemed like hard-working people.”

It wasn’t long before the couple had moved into an apartment, about 1 1/2 miles from the Atsugi gate and were expecting a child.

Sailors needed permission from their command to marry, so Walker filed a request. The officer who received it told him that he’d need to re-enlist to get it approved, so he filed that paperwork, too.

“When I went back two weeks later he said it had been denied and there was nothing I could do,” he recalled. “At age 18 or 19, you don’t argue with an officer, so we were stuck.”

Soon afterward the couple went to a clinic near the base where their child was born. Walker said he helped the young mother breathe and push while a Japanese doctor supervised the birth. His daughter was born around midnight on New Year’s Eve 1967, although it’s possible that the birth is registered as Jan. 1, 1968, he said.

Walker named his daughter Kim, but said it’s possible that she was registered under another Japanese name in either Yamato in Kanagawa prefecture or Yokohama, he said.

Father and daughter formed a strong bond, he said.

“I remember teaching her about her eyes, nose, mouth and ears,” Walker said “I remember her little laugh, and she was always waiting on me when I got home.”

Life involved shopping trips and outings to the beach and an amusement park near Atsugi.

“We were just a typical family,” he recalled.

One day orders came for Walker, now a petty officer 3rd class, to report to VA-195 — an A-4 Skyhawk squadron in Lemoore, Calif. He reluctantly boarded a train, riding with his daughter in his lap, to Tachikawa Air Base for his flight.

“Her mother and I were both crying all the way,” he said.

In California, he was told not to unpack; he was headed to Vietnam on the Oriskany. As he waited for the ship to depart, he wrote letters to his family, who he hoped to bring to the U.S.

All were returned marked “wrong address.”

When the carrier pulled into Osaka part-way through the deployment, he took leave and rode the train back to Atsugi but found his apartment empty. The neighbors didn’t know where the family had gone, and Walker couldn’t find his way back to her parents’ house. He came back again after he returned from the war. Nothing.

Back in the states, he wrote letters to the Japanese Embassy and the Japanese prime minister’s office but didn’t get a reply.

After he left the Navy, he became a commercial pilot, flying out of Memphis, Tenn. He eventually married and, when his wife gave birth to a daughter in 1972, they named her Kim, after her Japanese half-sister.

But Walker, who now lives in Arkansas, said he never stopped looking for his lost family.

Now 68 and retired, he recently set up a Japanese Facebook page and posted a photo of himself with his Japanese family that has been shared more than 2,000 times.

Walker has the support of his wife and American daughter who, he said, is eager to meet her Japanese sister.

He obtained his military records in hopes that his marriage request, listing the names of his daughter’s Japanese grandparents, would be there. They weren’t; he thinks it was never filed by the officer he gave it to.

Jim Auckland, another former sailor who worked alongside Walker at Atsugi, said the Navy was eager for sailors to re-enlist during the Vietnam War.

“Every time I was promised something there was always the proviso that my enlistment would be extended,” he recalled of his days at Atsugi.

Auckland said he remembered his friend and others dating Japanese girls. It was common for officers to make parental decisions about young sailors and it wouldn’t have been unusual for a marriage request to be denied, he said.

“They tell you: If the Navy wanted you to have a family they would have issued you a family,’” he said.

Yoshihisa Sawai, who worked as a civilian mechanic at Atsugi in the 1980s, has been helping with the search. He recently spoke about the case on a Kanagawa radio station and hopes to persuade a television station to produce a show about it.

“I have been searching for two years but it’s difficult,” Sawai said. “He only has a little information.”

Eric Kalmus helps run the Japan Children’s Rights Network — a group that aims to reunite children in Japan with foreign parents, often servicemembers. Strict privacy laws make it hard to track people down in Japan if they don’t want to be found, he said.

“It is like looking for a needle in a haystack,” he said.

Kanagawa police say people can file missing person reports but that they won’t actively search unless a crime is suspected. Several non-profit organizations, such as Missing Person Search, can help track down people in Japan and put the seekers in touch with private detectives, officials say.

It may be a long shot, but Walker isn’t giving up. He said he still prays daily for the family he left behind.

“Tomie was a wonderful woman,” he said. “I pray that they are doing OK and, if I have any grandchildren, that they are safe and well.”

Walker said if he found out where his daughter was living, he would leave for Japan the next day.

“A team of wild horses couldn’t keep me back here,” he said.