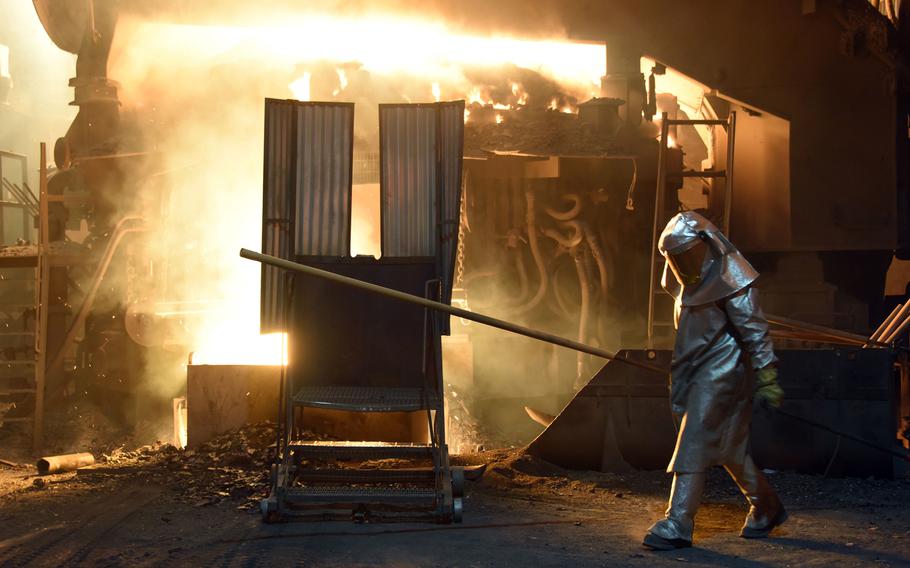 A steelworker checks the temperature of molten metal in furnace at the TMK Ipsco Koppel plant in Koppel, Pennsylvania on March 9, 2018. (MICHAEL MATHES/AFP)

The arrangement comes a little more than three months after the administration struck a deal with the European Union setting tariff-rate quotas that exempt imported steel products from a 25 percent tariff and aluminum from a 10 percent tariff as long as the volumes are below agreed-upon levels.

In a joint statement, Commerce Secretary Gina M. Raimondo and U.S. Trade Representative Katherine Tai said the agreement with Japan will allow steel products from that nation into the U.S. without the 25 percent tariff imposed under Section 232 as long as the volume does not exceed historically based volumes.

The agreement, covering only steel, takes effect on April 1 and applies to 54 product categories. The annual duty-free amount for all products in those categories is 1.25 million metric tons. In order to receive duty-free treatment, products must be melted and poured in Japan. Quota levels will be recalculated annually, and reviews will be conducted.

Raimondo and Tai said the arrangement will allow the U.S. and Japan to move forward on building an international climate policy to curb China’s overproduction of steel. The Biden administration announced a similar goal in October after brokering the steel and aluminum tariff agreement with the EU.

“I’m pleased to announce the deal we reached will strengthen America’s steel industry and ensure its workforce stays competitive, while also providing more access to cheaper steel and addressing a major irritant between the United States and Japan, one of our most important allies,” Raimondo said.

Tai also said the arrangement underscored the importance of alliances.

“In reaching this agreement with Japan, one of our most important trading partners, we are taking another step forward in our mission to rebuild and revitalize these important relationships,” Tai said.

“This agreement, combined with last year’s resolution with the European Union, will help us work together with Japan to combat China’s anti-competitive, non-market trade actions in the steel sector, while helping us reach President Biden’s ambitious global climate agenda,” the trade representative added.

The Biden administration also is reported to be in talks with the United Kingdom on modifying the Section 232 tariffs applied to steel and aluminum products.

The Trump administration negotiated easing of tariffs for some countries, with duty-free limits on the amount of steel from Brazil and South Korea and import limits on both steel and aluminum from Argentina. Australia, Canada and Mexico were exempted from the steel and aluminum tariffs.

Leaders in other countries considered reliable allies objected to the tariffs, arguing that they were overly broad and did not address the Trump administration’s concerns about the effect on global steel and aluminum markets caused by China’s overproduction.

Kevin Dempsey, president of the American Iron and Steel Institute, said the agreement was balanced.

“We appreciate the Biden administration’s continued recognition that the American steel industry is critical to our national and economic security and to efforts to build a more sustainable U.S. economy,” Dempsey said in a statement. “Proper implementation and enforcement of the TRQ will be essential to the ongoing success of the Section 232 program, as will continued vigorous enforcement of our laws to prevent circumvention and evasion of U.S. trade remedy measures on steel.”