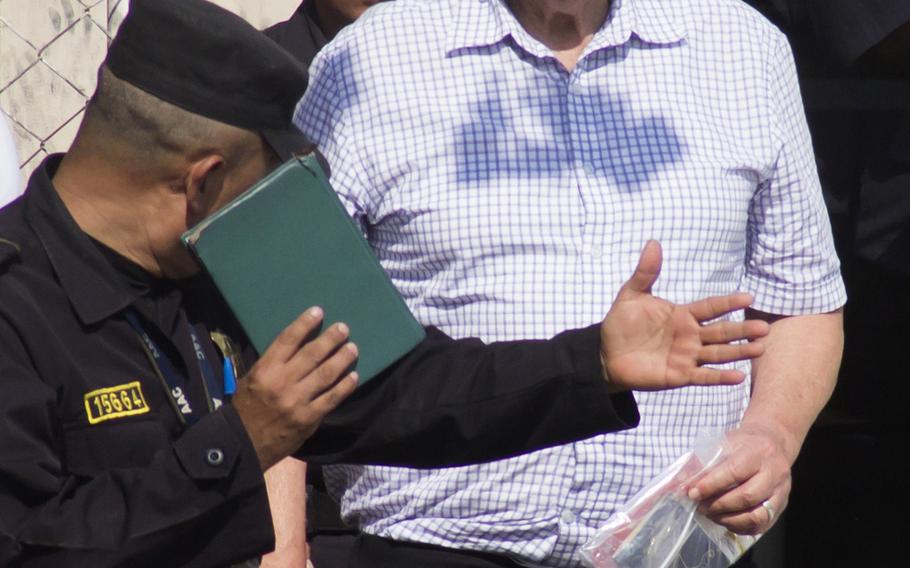 Police escort former General Eugenio Vides Casanova to a car outside the airport in San Salvador, El Salvador, Wednesday, April 8, 2015. The ex-general linked to human rights abuses during El Salvador's civil war in the 1980's was deported by the U.S. on Wednesday. (Salvador Melendez/AP)

SAN SALVADOR, El Salvador — A former general linked to human rights abuses during El Salvador's civil war in the 1980s was deported by the U.S. on Wednesday and flown to his home country, where officials said he faces no charges or restrictions on his movements.

"I saw him when he got off the plane," Silva said.

U.S. Immigration and Customs Enforcement said in a statement that Vides Casanova's deportation came after the Board of Immigration Appeals upheld a judge's 2012 ruling that the ex-general was "removable for having 'committed, ordered, incited, assisted or otherwise participated' in acts of torture and extrajudicial killing."

Vides Casanova, a 77-year-old former defense minister and head of El Salvador's national guard, has been tied to killings and torture by Salvadoran soldiers under his command, including the deaths of three U.S. nuns and a lay churchwoman in 1980.

He had been living in Florida since he retired in 1989, but was taken into custody by U.S. immigration authorities in late March after the United States' top immigration court ruled that he should be deported. The case was brought under a 2004 law designed to keep those accused of human rights abuses in other countries from seeking refuge in the U.S.

Vides Casanova, who in the 1980s was twice awarded the U.S. government's Legion of Merit for battling leftist rebels, has argued that his removal would be unfair because El Salvador's military tactics were backed by Washington at the time.

He still has an appeal pending with the 11th U.S. Circuit Court of Appeals in Atlanta, and Diego Handel, his lawyer, said via email that that process would continue.

Human rights activists and survivors of civil war abuses protested outside San Salvador's airport as the former general arrived. Among them was Juan Jose Romagoza, who filed a U.S. civil suit against Vides Casanova that resulted in a million-dollar judgment for him and two other Salvadoran plaintiffs in 2002.

"I was captured, wounded, tortured, held in the national guard's prisons under this general," Romagoza said. "I am here to demand justice, a search for truth and for him to go on trial. Only then can we forgive."

Vides Casanova and other former military figures are shielded by an amnesty law covering crimes committed during the 1979-2002 civil war, in which over 75,000 people were killed and at least 10,000 more disappeared.

Human rights prosecutor David Morales said there is no warrant for Vides Casanova's arrest and he is free to move about the country, but he called on prosecutors to open a case regardless.

"These are crimes against humanity that are not subject to amnesty," Morales said.

"Hopefully (it) will be a new impetus for the repeal of El Salvador's decades-old amnesty law, which has been ruled illegal under international law, and will clear the path for Vides Casanova to face criminal accountability in his own country," Blum said in a statement from the organization.

At the airport, uniformed officers escorted Vides Casanova, bespectacled and dressed casually in black pants and a checkered shirt, to a vehicle outside the terminal.

Montano Morales is one of 20 former Salvadoran military officials indicted there on charges related to the 1989 killings of six Jesuit priests — five of whom were Spanish citizens — a housekeeper and her daughter, by Salvadoran soldiers.

He is currently serving time in a North Carolina prison for immigration fraud and perjury, with his sentence set to end later this month.