US airstrike kills 8 militants in Somalia 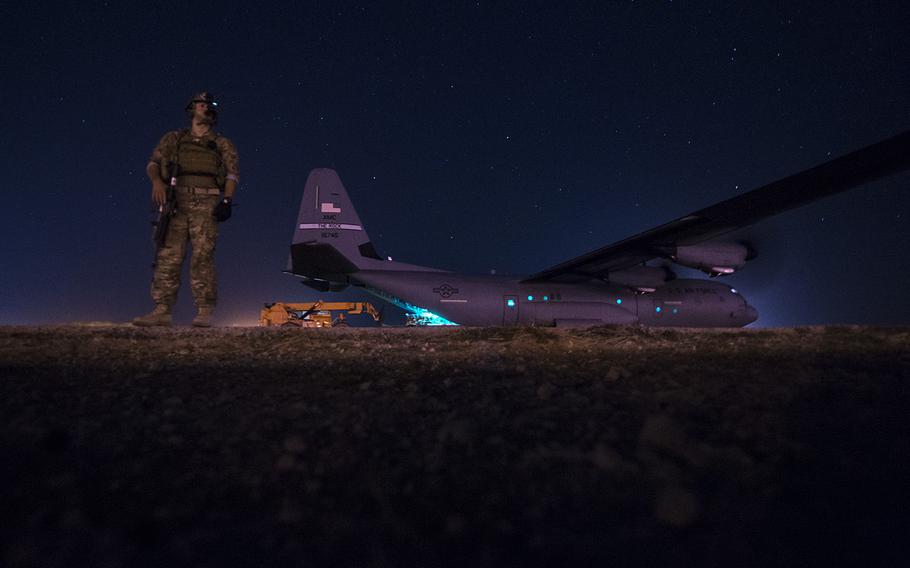 A fly-away security team from the 1st Battalion, 153rd Infantry Regiment provides security for a C-130J, May 26, 2017, during a cargo mission in Somalia, supporting the Combined Joint Task Force-Horn of Africa. (Russ Scalf/U.S. Air Force)

A U.S. airstrike killed eight militants Sunday in Somalia, where in recent months an Islamic extremist group has intensified operations against U.S.-backed forces and “cemented its control of southern and central Somalia,” the military said.

U.S. forces, in cooperation with the Somalia government, are "conducting operations against al-Shabab in Somalia to degrade the al-Qaida affiliate's ability to recruit, train and plot external terror attacks throughout the region and in America,” AFRICOM said in a statement

AFRICOM has stepped up the pace of its operations against al-Shabab, which remains a threat despite a decadeslong international effort to defeat the group.

A few years ago, al-Shabab was on the defensive but in recent months the group has reasserted itself. The group’s resurgence comes as African Union forces, which are leading the fight against extremists in the country, plan to begin withdrawing from Somalia next year.

AFRICOM was blunt about the group’s gains.

“The terror organization has taken advantage of (a) safe haven,” AFRICOM said. “The group has cemented its control (in) southern and central Somalia, they have used this area to plot and direct terror attacks, steal humanitarian aid, and to shelter other radical terrorists.”

In the last eight months, al-Shabab has overrun forward operating bases used by outnumbered African Union forces, seizing a wide-ranging arsenal of weaponry in the process.

Bases that have been overrun include those used by Burundian, Ugandan and Kenyan forces.

AFRICOM did not say what weapons system was used to conduct the strike, but the attack was performed under new authorities approved by President Donald Trump in March, the Pentagon said.

As the African Union plots its withdraw from Somalia after more than a decade of fighting, the U.S. is racing to bolster Somalia’s fledgling armed forces.

In early May, a U.S. Navy SEAL was killed during operations in Somalia, a sign of the increased risk taken on by the U.S. military in Somalia.

U.S. special operations forces are operating alongside Somali troops on the battlefield in an advisory role while U.S. soldiers have been deployed to Mogadishu to train the country’s troops on how to resupply its forces.

AFRICOM said it will carry out more strikes when needed when "hunting and tracking members of this al-Qaida affiliate throughout Somalia, the region and around the world."