AFRICOM investigating if US troops knew of torture at Cameroonian base 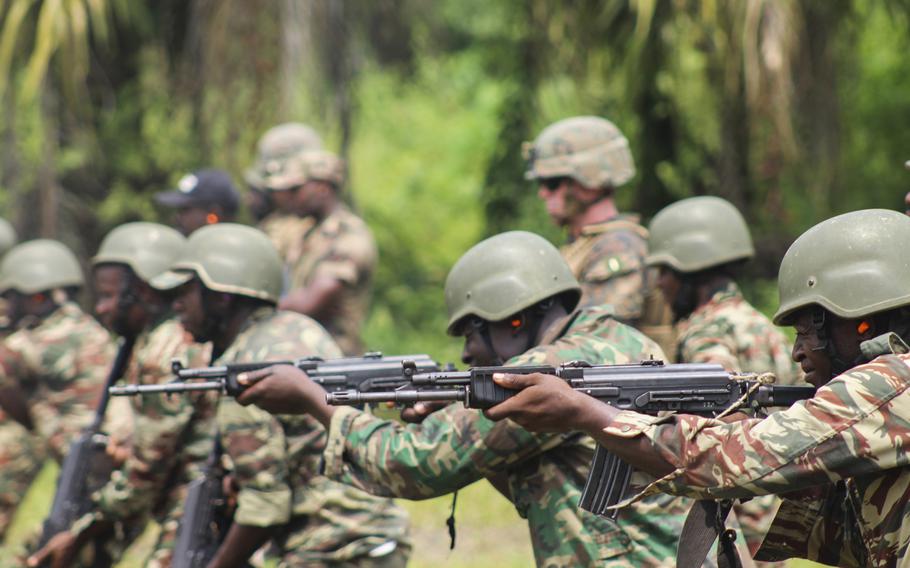 Soldiers with the Cameroonian Naval Commando Company participate in a live-fire range under the supervision of U.S. Marines at Isongo Training Area, Limbe, Cameroon, Feb. 18, 2017. U.S. Africa Command has ordered an investigation into whether U.S. forces knew about allegations that Cameroonian forces abused prisoners on a military base where Americans have had a presence. ( Robert Piedra/U.S. Marine Corps)

STUTTGART, Germany — U.S. Africa Command has ordered an investigation into whether U.S. forces had any knowledge about allegations that Cameroonian forces abused prisoners on a military base where Americans have had a presence.

“We are aware of the 2017 Amnesty International report alleging illegal detentions and abuse of prisoners by Cameroonian soldiers and are currently reviewing its contents,” AFRICOM’s Capt. Jennifer Dyrcz said. “U.S. Africa Command has ordered that an inquiry be conducted into these allegations. As the inquiry is ongoing, we can’t provide specific details about what that entails.”

To date AFRICOM has not received any reports from U.S. forces about potential human rights abuses by Cameroonian forces, AFRICOM said.

Military members are required to report any “possible, suspected, or alleged violation of the law of war for which there is credible information during the conduct of operations,” Dyrcz said. “These reports are required to be made promptly to the chain of command in the most expeditious means possible.”

AFRICOM’s inquiry will include “determining what reported information, if any, AFRICOM was aware of prior to this allegation,” the command said.

Amnesty International said in a July 20 report that between March 2013 and March 2017 Cameroonian security forces tortured prisoners they suspected of being members of the extremist group Boko Haram, in violation of international human rights laws.

The report did not accuse U.S. soldiers of participating in the events, but it did raise questions about whether U.S. military members knew that prisoners were being held and tortured.

The U.S. maintains a small presence in Cameroon, which hosts a drone base. In addition, U.S. and French forces train with Cameroonian soldiers, who are on the front lines in the fight against Boko Haram. While the group is mainly based in northern Nigeria, the extremists have carried out cross-border attacks in Cameroon.

U.S. military personnel were regularly present at the Salak military base, where “widespread practices of illegal detention and torture documented in this report were carried out,” Amnesty said.

The report included testimony from one prisoner, who said: “I saw white men in Salak many times and I heard them talking in English. I think they were Americans … I saw them running from the back window of my cell, especially in the morning, as well as standing in front of our cell, just where the garage was. Some were wearing plain clothes, others were in uniform. The uniform was like camouflage clothing, green and beige.”

AFRICOM declined to go into detail about its mission in Cameroon, citing operational security concerns. It said U.S. military personnel are deployed to Cameroon to assist the country in countering violent extremist organizations in West Africa.