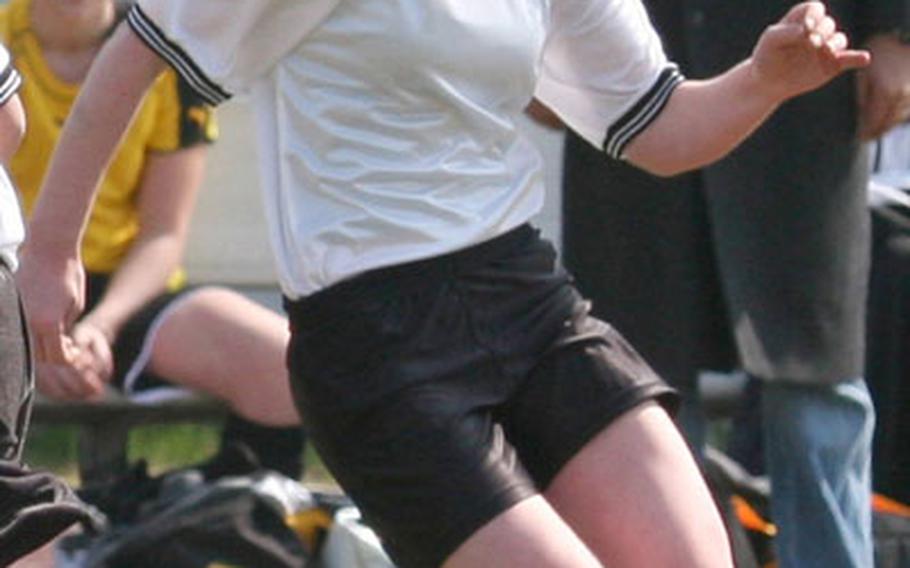 Ordinarily, any team that starts with a roster dominated by underclassmen and a new coach, and then sees last year&#8217;s leading scorer transfer right before the start of the season, could pack it in and look toward next year.

To paraphrase an old movie title, the kids are all right. Coach Vanessa Little&#8217;s team has won half of its four matches and even scored two goals on last year&#8217;s Class AA runner-up American School In Japan last Saturday at Camp Zama.

Despite being so young &#8212; six freshman, five sophomores and just two returning starters &#8212; Little and her players say they aren&#8217;t content to wait for success. They feel their time could be now.

&#8220;We&#8217;re determined to learn and develop quickly. Everybody is just wanting to play,&#8221; said freshman transfer Whitney McWherter, a midfielder who has five goals and two assists this year.

&#8220;During tryouts, I realized how inexperienced everyone was,&#8221; said fellow freshman transfer Aubrey Ashlinman (seven goals, two assists), a forward. &#8220;I didn&#8217;t know how well we would play together, but we&#8217;re starting to learn how each other plays and getting to know our positions better.&#8221;

Not bad for a team of almost entirely new faces from the one that went 6-11-5 last year and finished last in the 12-team Class AA tournament on Okinawa. They even lost last season&#8217;s leading scorer, sophomore Rachel Ravelo (22 goals), who left for South Carolina this month.

The team&#8217;s makeover began with the arrival of Little, who coached last season at Keflavik, Iceland, and the previous four seasons in Florida after graduating from West Virginia-Wesleyan.

A first glance at Zama&#8217;s tryout prospects and &#8220;I figured it was going to be one of those rebuilding years,&#8221; Little said. &#8220;Plus, with me being new, I knew that going over new drills and formations and things, it was going to be rebuilding regardless whether we had freshmen and sophomores or not.&#8221;

Defense surfaced as an issue as the season got started two weeks ago, Little said.

But that might have been a small hurdle compared with Keflavik, where Little said most of her players hadn&#8217;t played before at all.

Key to the team&#8217;s early fortunes is the tandem of McWherter and Ashlinman. They each lived in Nevada from birth until the second grade, then their families both moved to Virginia Beach, They each attended private schools and played for the same traveling team in Virginia.

Adding to the team&#8217;s surprising success is the fact that the players get along well on and off the field, players and coach say.

So, just how far can this young bunch take their early success?

Is a DODDS-Japan or Kanto Plain title, perhaps placing high in the Class AA tournament May 21-25 at Yokota, out of the question?