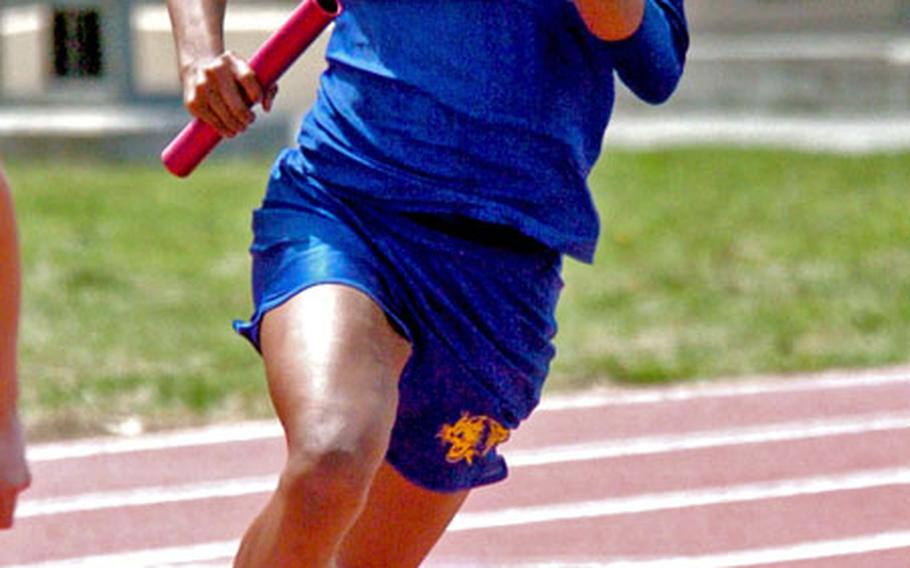 Yokota’s Charlotte Taylor has run in just three meets but already has posted times within one second of Kanto records in the 100 and 200. (Jim Schulz / S&S)

Matt Grant knew the instant he saw Charlotte Taylor playing basketball last winter that she had the potential to be a record-setter for his track and field team at Yokota.

&#8220;Her reflexes ... how quick she was stealing balls,&#8221; Grant said of his impressions after basketball coach Ric Cabral called his attention to the speedy freshman. &#8220;When I saw her play, I told her mom that I had to have her out for track.&#8221;

Taylor has proved Grant right. She has won all eight events she has entered in three meets this season.

And last weekend, she ran the 400 for the first time in a Yokota High meet, finishing first in a race that was deemed unofficial because it was marked improperly.

All this from a freshman with no previous training or pedigree other than being the younger sister of former Japan Football League rushing champion Darren Taylor. He might have planted the seed that became a star sprinter, when Charlotte was a fourth-grader in Yokota, she said.

She especially worked on it since last year, when Taylor was in middle school, clocking times two to three seconds slower than she is this year.

Taylor hit the stairmaster and treadmill hard in the base gym, as orthodontic braces restricted her diet. She dropped 30 pounds and kept pushing.

She succeeded &#8212; and credits a new mind-set for her success.

One deficiency on Yokota&#8217;s girls track team, he said, is the distance events dominated by non-DODDS schools. That might prevent the Panthers from winning team titles. But with his cadre of sprinters, Grant said, he believes records are within reach.

Other coaches have noticed Taylor.

For Taylor to be competitive in short and middle-distance sprints shows &#8220;she has the ability to last.&#8221;

But unfortunately for Grant and Yokota, the Taylor family is to transfer in July, their destination unknown.

For now, Taylor plans to continue basketball and track.

Eby, who has sent a handful of athletes to stateside universities, said he believes Taylor could do well on the next level.

But he hopes that ultimately, she chooses track.