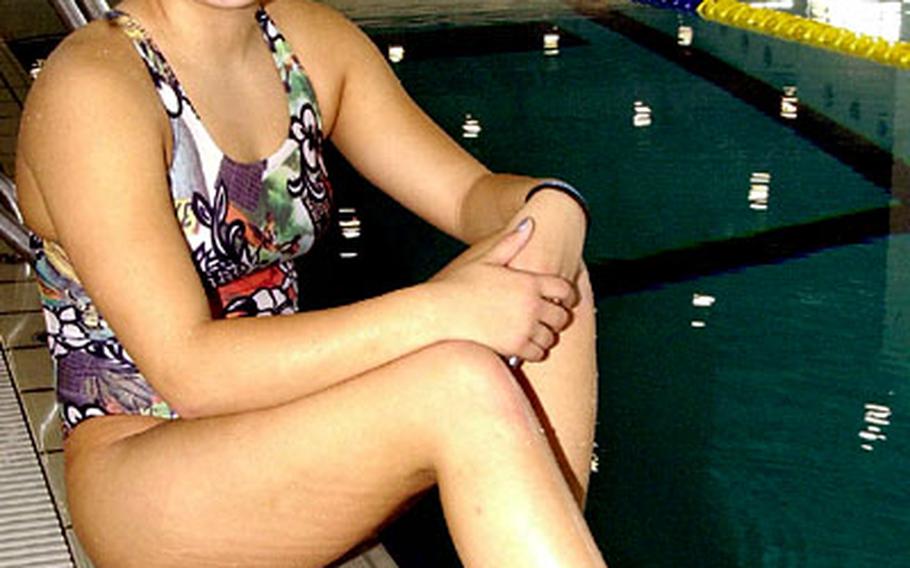 Every now and then, Elliko Heimbach looks through an old Sports Illustrated or Swimming World, or browses the Internet, seeking history-makers&#8217; names and reading their achievements.

Heimbach, 16, a Yokota High School junior who has competed against Japanese and American swimmers since she was 10, hopes to join that list.

In six months, she&#8217;ll hit the Tatsumi International Swim Center for the Japanese Olympic team trials, competing for a spot in the 2004 Summer Games in Athens.

In the Suburban Tokyo Club Swim Championships on Oct. 26, she finished the 100-meter butterfly in 1 minute, 1.75 seconds to qualify for the Olympic trials. Because she holds dual American-Japanese citizenship, and because the U.S. qualifying time is 1:02.39, she also could try out for the U.S. team in July in Long Beach, Calif.

The Japanese trials, scheduled for April, are the crowning achievement of Heimbach&#8217;s six-year ride.

She adopted that outlook last summer in Irvine, Calif., with Novaquatics, one of Southern California&#8217;s foremost swimming clubs.

Novaquatics coach and CEO Dave Salo and Irvine High School coach Scott Hinman, she said, &#8220;showed me a whole new way to view swimming: Just have fun with it.&#8221;

Her longtime coach, Yoko Yatsuzuka, whom Heimbach describes as strict, says blending two approaches to swimming has served her well.

&#8220;She has a very good sense in swimming &#8230; her kicking timing is very good and her swimming is very dynamic,&#8221; Yatsuzuka said. &#8220;Elliko is still growing, and her potential is unlimited. She has the best of both America and Japan. She knows where she stands and is always very positive-minded, yet very humble and takes swimming very seriously.&#8221;

Competing for Novaquatics and Irvine also strengthened her confidence.

Grabbing a spot on the Japanese Olympic team, Yatsuzaka cautioned, depends on how she performs before the trials.