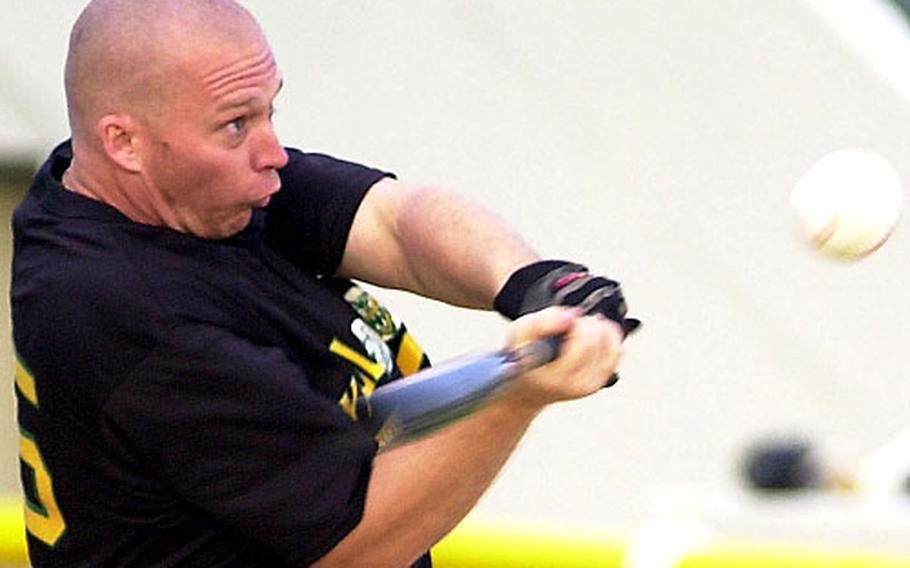 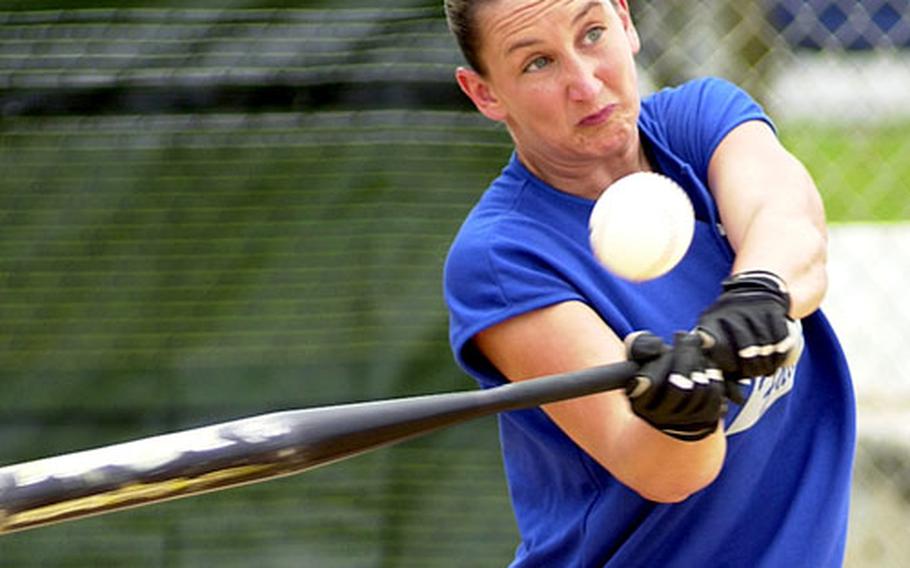 Left fielder Amanda Snyder of the Kadena Falcons connects for one of her five singles in five at-bats in the first inning against the Kadena Outkast during Monday&#39;s women&#39;s championship game. (Dave Ornauer / S&S)

CAMP FOSTER, Okinawa &#8212; He barely had time to get his glove in front of his face, but Chris Souza&#8217;s instinctive reactions to snare a searing line drive sealed the Firecracker Shootout championship for Yellow Box on Monday.

&#8220;I wasn&#8217;t thinking at all. That was purely self-defense,&#8221; the third baseman said of the play that ended Monday&#8217;s championship game and wrapped up Yellow Box&#8217;s 7-5 triumph over Pacific Force, ending a long run of frustration for Yellow Box against their archrivals.

The women&#8217;s championship, meanwhile, was no contest. The Kadena Falcons completed an 8-0 title run in which they scored 110 runs and allowed just five by routing the Kadena Outkast 20-2 in a battle of relatively new teams.

went unbeaten in a Grand Slam tournament for the first time,ended Pacific Force&#8217;s three-year Firecracker title run, andsnapped a string of six straight losses to Pacific Force in a Grand Slam tournament final.&#8220;You just keep coming back and keep fighting,&#8221; O&#8217;Brien said. &#8220;We&#8217;ve just come up short in the big one. [Pacific Force] is a helluva ballteam, position for position. There&#8217;s no chinks in that armor. Everything has to go on all cylinders to beat them.&#8221;

O&#8217;Brien thought that happened Sunday. Scott Roe went 3-for-3 with a homer and three RBIs, Gary Solomon sparked a four-run first inning with a two-run single and Chris Souza and Tommy Byrns added back-to-back RBI doubles. The defense helped by turning a pair of double plays.

Pacific Force, winners of 39 of 61 Grand Slam titles since the circuit began in 1989, had not lost a final in seven years.

Behind Jeff Hill, who delivered two hits and three RBIs, Pacific Force scored twice each in the fourth and sixth, but never got closer than two runs. Gary Chaney went 3-for-3 and Jesse Herrera rapped a sacrifice fly.

In the women&#8217;s championship, the batting skills of versatile Michelle Hall, who went 3-for-3 with five RBIs, including a three-run home run in a six-run fifth inning, put the exclamation point on the Falcons&#8217; title drive &#8212; and her final tournament with the team; she transfers next month to Hill Air Force Base, Utah.

Maegan Sinclair, also in her last tournament after four years at Kadena Air Base, bid farewell by going 3-for-4 with an RBI double. She earned tournament MVP honors.

Joining Hall and Sinclair on the hit parade were left fielder Amanda Snyder, who went 5-for-5 with five singles and two RBIs; and All-Marine outfielder Jamie Bailey, 4-for-5, with four RBIs.

Since finishing third in the Pacificwide Open over Memorial Day weekend, the Falcons, who formed just three months ago, have gone 12-0 and outscored opponents 179-14.