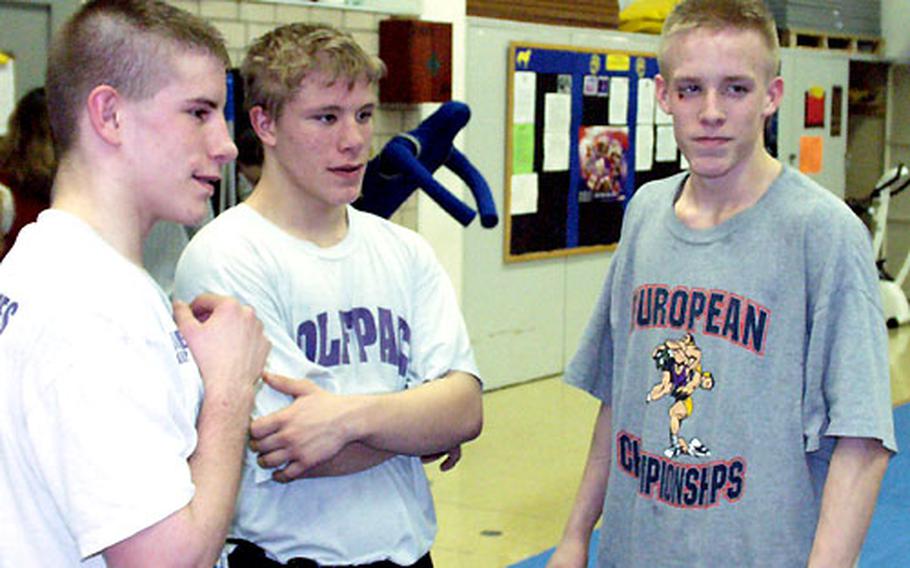 W&#252;RZBURG, Germany &#8212; Juniors Jesse and Jonathan Painter, twin brothers who both placed as sophomores for W&#252;rzburg at last season&#8217;s European wrestling championships, return to this weekend&#8217;s tournament hoping for more.

And the bad news for the Wolves&#8217; future opponents is that another Painter is on the way.

Next year, Jesse and Jonathan will be joined by younger brother Brian, an eighth-grader who already has shown a lot of promise, according to W&#252;rzburg wrestling coach Duane Werner.

Brian, oddly enough, is the one who introduced his older brothers to wrestling.

Jesse then passed the bug along.

Until the youngest in the family showed them a different way, Jesse and Jonathan were, respectively, a football player and a cross-country runner.

Both still compete in those sports, with considerable success. Jonathan, who placed fourth at 119 pounds in last year&#8217;s European wrestling championships, finished 13th in the European cross-country championships in October.

Jesse still plays football but prefers the highs and lows in this most individual of all amateur sports.

Even though they&#8217;re twins, the Painters differ in their approaches to the sport, according to Werner.

&#8220;Jesse is more of a bull in a china closet,&#8221; Werner said of the football-playing brother. &#8220;He will make mistakes going full bore, but usually can get out of them with his aggressiveness. Jon is a little more technical, but all of them can go full bore.&#8221;

&#8220;Full bore&#8221; pretty much sums up W&#252;rzburg&#8217;s team philosophy, and all three Painters agreed that the team is vital for motivation, even though a wrestler steps onto his playing field by himself.

In the case of the Painters, training is the bread-and-butter of their daily existence. The dedication hasn&#8217;t gone unnoticed by Werner.

The conditioning edge is mental as well as physical, Werner added.

Werner&#8217;s Wolves were savaged by graduation and transfers this season. Twenty-three of his 29 wrestlers are freshmen and sophomores, yet the team still finished fourth in last weekend&#8217;s Division I championships.

Wrestling in a brutally tough 119-person field, Jonathan placed fourth, while Jesse just missed a 125-pound crown in a 9-7 loss to champion Adam Johnson of Heidelberg.

Werner&#8217;s counting on an augmented squad of Painters to help pull W&#252;rzburg back into the hunt next year.