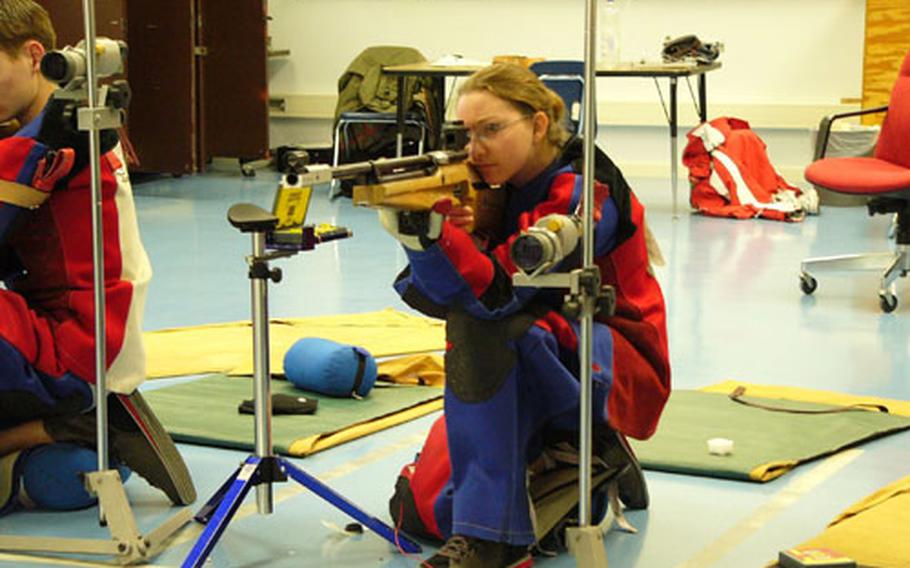 DODDS-Europe record-holder Brenna Goodman hones her shooting eye Tuesday at Würzburg High School. She has set a record in each of her last two matches, including the 293 out of 300 she fired Saturday. (By Rusty Bryan / S&S)

There are quick studies, and then there&#8217;s Brenna Goodman.

Goodman, a junior at W&#252;rzburg High School who has set the DODDS-Europe marksmanship record two weeks in a row, had done no shooting before August 2005. That&#8217;s when 1st Sgt. Jack Wayne of the W&#252;rzburg Junior ROTC invited her to try out for the rifle team.

Goodman, 16, did more than enjoy her first experience with the sophisticated precision air rifles used for marksmanship. By last January, she had tied teammate Carly Sipes for the individual European championship. By last February, she had qualified for the JROTC national meet at Fort Benning, Ga.

And just last month, she set a DODDS-Europe record, 291 of a possible 300. Saturday, she broke that mark by firing a 293, which included a perfect 100 in the prone position, and a hard-to-believe 98 of 100 in the standing position.

Hard-to-believe, that is, until you see her in action.

Rudd is one of several coaches Goodman credits with her rapid progress. Chief among them is co-coach John Freeman.

&#8220;Sgt. Maj. Freeman gave me the nitty-gritty on getting into the 290s,&#8221; Goodman said. &#8220;He taught me things like the basic point of aim, shifting your body so that the rifle naturally falls on the target. It helps keep the rifle from drifting right or left.&#8221;

Goodman apparently comes by her ability naturally. Uncles Mark and Marshall Goodman are avid hunters, she said, and her father, Rob, is an Army officer.

Rudd thinks Goodman&#8217;s main strength is her ability to focus.

Goodman agrees about the team&#8217;s quality, but not just for its prowess on the range.

Goodman has already qualified for next month&#8217;s nationals at Fort Benning. Her 293 is the best score posted so far nationally, according to Rudd, and 11 points higher than her mark last year at the Europeans.

For her part, Goodman hopes to continue in the sport she&#8217;s taken to so quickly.

Does she think the steep learning curve she&#8217;s ridden so far will flatten out?