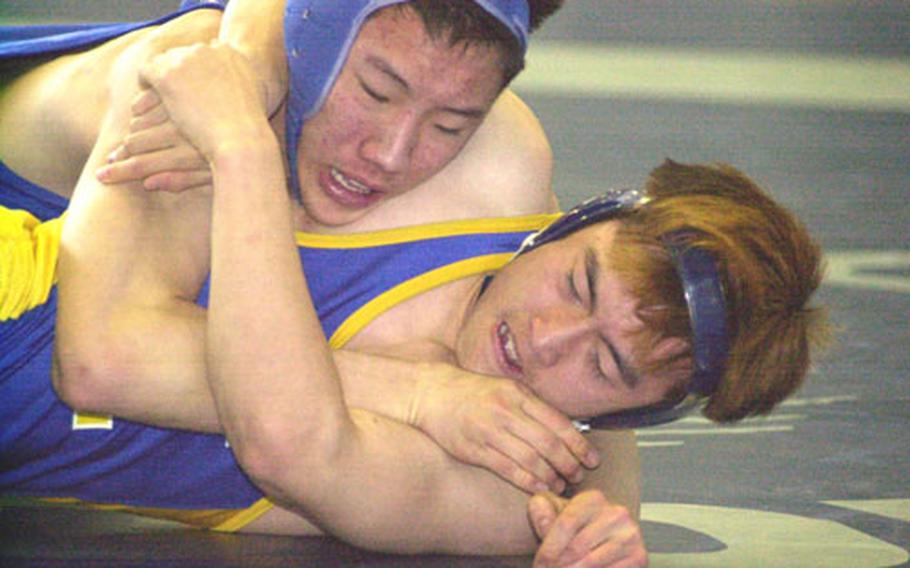 But during Wednesday&#8217;s round-robin bouts, the 115-pounder from Osan American in Korea surrendered an early lead and suffered his first loss of the season, 9-6 to Jordan Foxwell of Christian Academy In Japan.

Adding to the sting of his loss, tournament organizers spelled his name wrong &#8212; Gushwan instead of Gasaway &#8212; on bout and bracket sheets.

He can be thankful that the loss came during the tournament&#8217;s first phase, the round-robin pool play designed to seed wrestlers in the modified single-elimination round to follow. Gasaway won his pool anyway and earned a first-round bye.

The combined two-day individual freestyle format, now in its second year at Far East, also gave Gasaway and 147 other wrestlers an opportunity to gauge their opposition with nothing more at stake than a favorable playoff seed.

&#8220;This is a good chance to see other guys, watch their moves and develop strategies to counter them,&#8221; said 135-pounder Dustin Haney of defending champion Yokota, who also won his round-robin pool.

The format, implemented in last year&#8217;s Far East on Okinawa, combines what a handful of coaches believe were the best elements from two methods used to seed previous tournaments:

&#8226; For most of its history since 1976, the tournament used an international freestyle format: Competitors were seeded by blind draw, regardless of season record. &#8220;If you do that, the top two wrestlers in a weight class could meet each other right away,&#8221; Haney said.