Wrestlers at U.S. Forces in Europe meet happy for one more time on mat 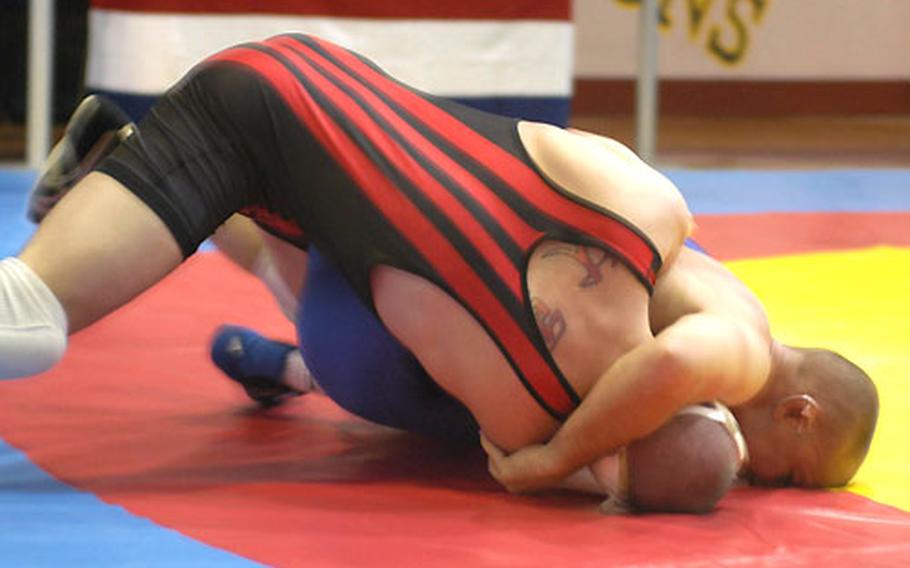 A.J. Werner brings down Bradley Gladbach near the edge of the mat Saturday in the 163-pound championship match in the freestyle portion of the U.S. Forces in Europe wrestling finals in Vicenza, Italy. (Kent Harris / S&S)

But they had something in common Saturday with a few dozen other servicemembers. They were back on the wrestling mat.

Both came away with titles in the U.S. Forces in Europe wrestling championships. On Saturday, it was freestyle competition; on Sunday, Greco-Roman.

For most of those competing over the weekend, wrestling is just wrestling.

And catch up on old times.

Werner and Thomas Tingley, who was the top wrestler at 145 pounds, wrestled at the Air Force Academy. Werner, 34, was later a coach there before going on to become a U-2 pilot. He&#8217;s now attending Sofia University on a fellowship. His father, Tom, a longtime coach at W&#252;rzburg High School, was one of the officials Saturday.

So the younger Werner decided to make the trip over.

Bad news for the competition. He had two pins in his three round-robin matches before running into some trouble in the championship match in the form of Hanau&#8217;s Bradley Gladbach.

Gladbach had a 4-0 lead in the first period before Werner overtook him at the end.

Of course, being a U-2 pilot and then taking graduate courses hasn&#8217;t left much time for practice.

&#8220;It&#8217;s been a good five or six years since I actually wrestled,&#8221; he said. That was until recently, when he discovered a wrestling club of sorts in Bulgaria and stared working out.

Anderson, assigned to Vicenza, has had more in the way of workout partners. But wrestling hasn&#8217;t exactly been priority No. 1 of late.

&#8220;There hasn&#8217;t been all that much time to devote to it when we&#8217;re training to get ready to deploy for Operation Enduring Freedom,&#8221; he said. He&#8217;s among the thousands of soldiers at Vicenza who are set to head to Afghanistan early next year.

Anderson, 24, wrestled for two years at West Point. He defeated Ramstein&#8217;s Robin Kiska 7-0 in the championship match Saturday. He smiled when he said he had bigger grudge matches earlier in the day.

Many of the same wrestlers go at it again Sunday in the base gymnasium starting at 10 a.m.