With three-of-a-kind, Mannheim looks to run the table 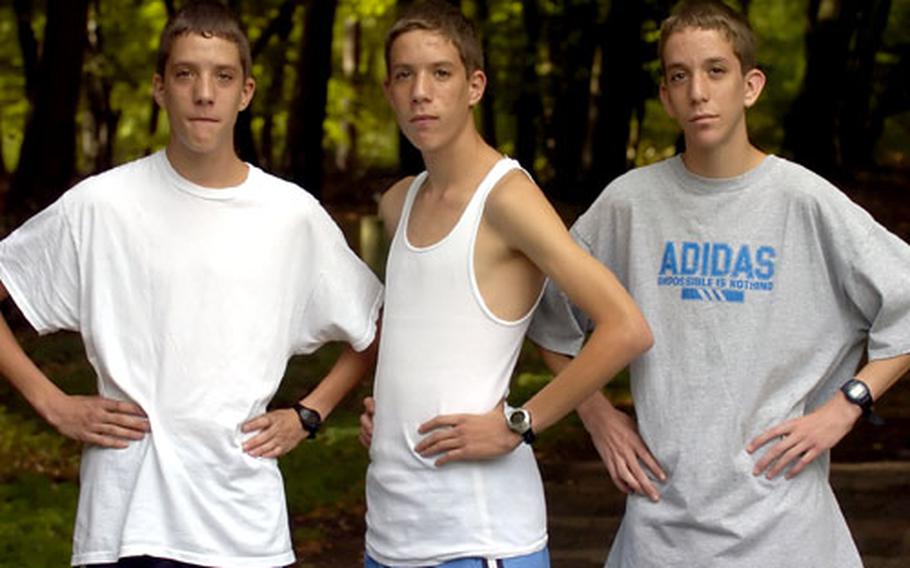 From left, Matt, Tim and Brandon Spicer. The sophomore triplets run for Mannheim High School’s cross country team, and all three have finished in the top 10 in both of the Bison’s meets this season. (Raymond T. Conway / S&S)

The Bison&#8217;s good things are the 15-year-old Spicer triplets: Matt, Brandon and Tim.

Just how good has become apparent in the season&#8217;s first two meets. In the Sept. 17 opener at Kaiserslautern, the Bison pushed six-time Division I champion Ramstein, losing by 12 points. Tim placed third, Matt seventh and Brandon 10th, while Wert came in sixth and Davonte Cook, coaxed onto the team for the first time as a junior, placed ninth.

Last Saturday at home, it was first for Tim, second for Wert, third for Matt, fourth for Cook and sixth for Brandon as the five-man Bison herd stampeded a five-team field, winning by 42 points over Division I Wiesbaden.

Patch edged Mannheim 61-73 in last year&#8217;s European Division II meet, and the Spicers said Saturday&#8217;s meet is a first step toward their ultimate goal this season.

If they do, it&#8217;s not a case of instant success. The Spicers said they began running at age 3 when their father, a former high school and college runner and a present marathoner, introduced his three sons to the sport he loves.

Thirty years later, the Spicers are still following in their father&#8217;s footsteps.

The trio already knows what it&#8217;s like to work hard. They train together year-round, Tim said.

While the attention to speed work for cross country might seem odd, it isn&#8217;t, Matt said.

All three, veterans of the AAU Junior Olympics, agreed that moving to Europe, where they&#8217;ll encounter fewer strong runners than they would in the States, won&#8217;t hurt their progress.

On top of that, they&#8217;ve still got one another as inspiration, particularly on race day.

This season, the finish comes Oct. 29 at the European championships in Heidelberg, where the Spicers say they have their eyes on medals and Wert entertains visions of more than that.