With Far East looming, wrestlers get chances to see where they're at 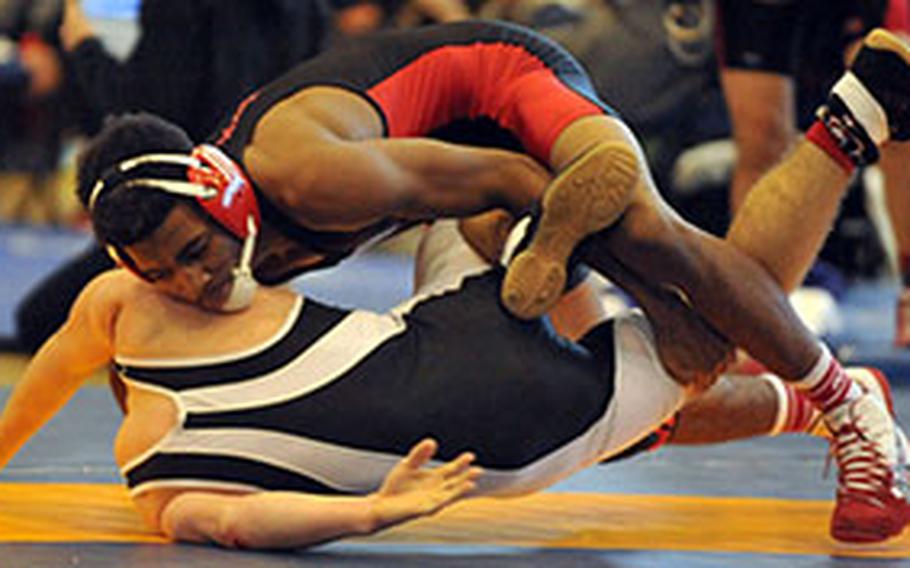 With a perfect 10-0 dual-meet regular season in hand, coach Gary Wilson and Nile C. Kinnick wrestling now turn their attention to three upcoming tournaments in four weeks – the first one this Saturday.

The Kinnick Invitational “Beast of the Far East” Tournament kicks off at 9:30 a.m. Saturday. It’s in its 25th year, in one form or another, since its inception in 1994. It returns to Kinnick after one year being held at Yokota.

As usual, the “Beast” serves as a dress rehearsal for the Far East tournament set for Feb. 1-3, also to be hosted by Kinnick.

But despite Kinnick’s successes on the mat, Wilson said there’s still a lot of work to be done before his Red Devils can call themselves ready for their state championship-equivalent tournament.

“We have a lot to prove,” Wilson said. “We got lucky to face St. Mary’s early in the season, but … they improve from start to finish. It’s hard to tell if we’ve kept pace with them. We haven’t seen much of them.”

Wilson says he also has an eye on Kubasaki, which holds the record for most Far East tournament titles, 25, but none since 2013. The Dragons are unbeaten against their island rivals, Kadena, thus far this season.

“They (Dragons) have a lot of names I recognize and don’t recognize, and both scare me,” Wilson said. “It’s going to be a battle.”

Teams from Japan and Okinawa comprise most of the field, with Kinnick and Yokota fielding full lineups and St. Mary’s, Matthew C. Perry and Kubasaki having 12 wrestlers each in tow.

Shonan Military Academy, a regular participant in “Beast,” has a near-full lineup for the first time in awhile, Wilson said.

The Japanese school brings “good techniques and applications of techniques, which is always good,” Wilson said. “It’s like having a second St. Mary’s in the tournament.”

Also in attendance will be five wrestlers from Seoul American; the rest of the team, along with Osan and Humphreys, will wrestle a four-way dual-meet tournament at Daegu on Saturday.

Kadena and Kubasaki basketball continue their preparation for the Far East Division I Tournament later this month with a two-day exchange with Taipei American School on Saturday and Sunday.

It’s the third year the Tigers have played the Dragons and Panthers in mid-January, and the second time Taipei American, a DODEA school until 1979, has traveled to Okinawa in the last three years. Games begin at 10 a.m. Saturday and Sunday at Kubasaki.

Also on the hardwood, in Korea, Daegu visits Humphreys, with the girls game looming as an important battle for seeding purposes in the Far East Division II Tournament later this month at Matthew C. Perry.