Will topsy-turvy season continue in playoffs? 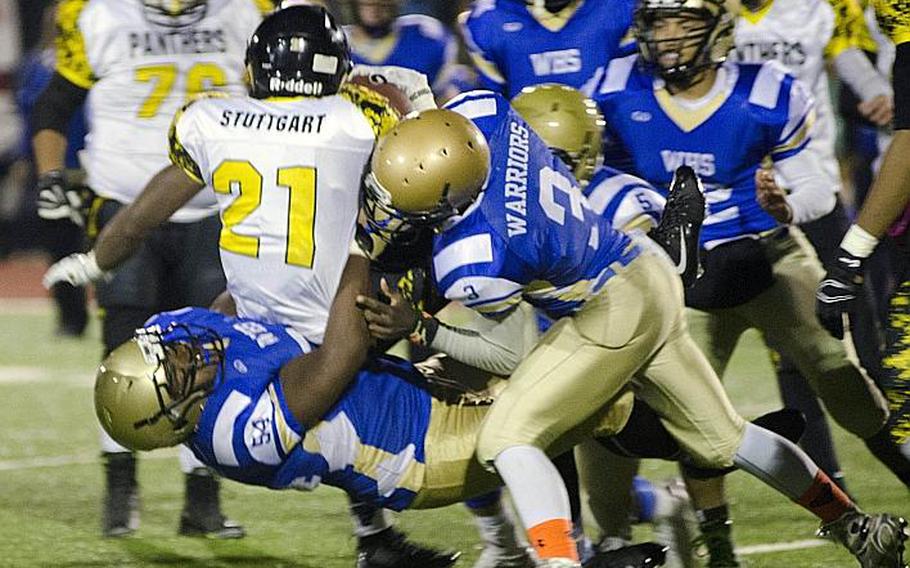 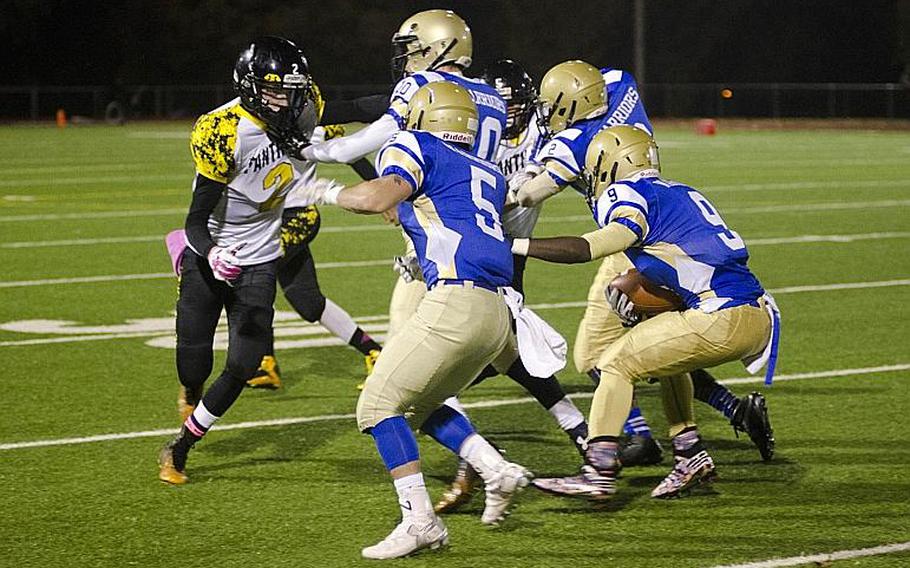 One of the most compelling postseason chases in recent memory came down to the final weekend of the five-week Division I schedule. All six teams, from outright No. 1 seed Ramstein to eliminated Kaiserslautern, had a hand in determining the final playoff seeding. The whirlwind weekend ended a season that yielded a new twist with each passing week.

Now chaos has given way to order, on two fronts. The swirl of playoff scenarios and tiebreakers has been replaced by a straightforward bracket of two semifinals leading to a championship game. And at the top of that bracket, despite all the upsets and surprises that created it, are Ramstein and Wiesbaden.

The defending champion Ramstein Royals will host the fourth-seeded Stuttgart Panthers on Saturday, while the 2013 champion and 2014 runner-up Wiesbaden Warriors host the third-seeded Lakenheath Lancers. Wins by both home teams would set up a third consecutive clash between the two title-game mainstays.

That possibility raises a couple of questions. Will the unpredictability of the 2015 regular season spill over into the playoffs? Or has the status quo survived, shaken but still fully intact? The answers arrive Saturday; the winners will advance to the Division I championship game Nov. 7 at Kaiserslautern High School.

No. 4 Stuttgart at No. 1 Ramstein It’s become an unpleasant ritual for the Panthers in recent seasons: play a solid regular season, advance to the postseason, then suffer an ignominious ouster at the hands of the Royals.

The streak began in the 2012 title game as Ramstein ended the championship hopes of the program then known as Patch with a 26-7 win. It got worse over the next two seasons as the Royals eliminated the Panthers in consecutive European semifinal games by scores of 34-0 and 48-7.

But there’s a more recent score that might better foreshadow what’s in store Saturday: Ramstein 13, Stuttgart 6, the final score when the teams met Oct. 3 at Ramstein.

For Stuttgart, that loss was the first of its season, and it started a late-season skid in which the Panthers lost three of their last four games. For Ramstein, the game turned out to be a microcosm of its challenging regular season, where success was never assured but was ultimately earned nonetheless.

On the surface, the Royals’ season has been an unbeaten victory lap after last year’s triumphant title-game shutout of Wiesbaden. That impression was furthered as Ramstein loomed above the dramatic final weekend as the only team not facing elimination, or even playing for seeding. But the truth is far grittier.

Injuries at the top of the depth chart have pressed new players into big roles, notably running backs Connor Davey and Sid Boggs, on a team that was already breaking in throngs of new players. As a result, Ramstein has won but hasn’t dominated – the Royals started their season with a tie against eventual playoff bystander Vilseck, earned two of their wins by exactly seven points and didn’t post a margin of victory greater than 20 points all season.

With those numbers in mind, a Panther upset isn’t out of the question if they can pull off a few big plays. Those game-changers have largely eluded them this season, particularly in losing winnable games to Ramstein and Wiesbaden. But the personnel is there, from running back Myles Bryant to all-around playmaker Jamie Ensley.

No. 3 Lakenheath at No. 2 Wiesbaden The Lancers’ return to the title chase is the most tangible change yet wrought by the eventful 2015 season. With a win Saturday, Lakenheath will make its first European title-game appearance since it lost the 2002 crown to defunct Würzburg.

The only Division I football team not located in Germany, Lakenheath played itself back into the DODDS-Europe mainstream this fall behind a top-flight running game led by Marcus Smith and a tough defense helmed by Colten Menges. Its 2-3 divisional record put Lakenheath in a three-way tie for third place, and it took the No. 3 seed thanks to regular-season wins over Stuttgart and Vilseck, the other two teams involved in the deadlock.

There is reason to question whether Lakenheath has truly made the leap, however. Including a season-opening defeat of Kaiserslautern that didn’t count towards playoff seeding, the Lancers only beat the three teams that finished below them in the standings. They struggled against the Royals and Warriors, losing by respective scores of 27-7 and 33-20.

To prolong their stay in the DODDS-Europe playoffs, the Lancers will need to close that gap.

Wiesbaden lost two of its last three games, but edged Stuttgart in its season finale to finish 3-2 and claim second place outright.

Warrior quarterback Eric Arnold has improved steadily over the course of the season and now has a firm grasp of the considerable weapons around him, including running backs Deshon Barrow and Keyshaun Green. Still, this is not the overwhelming Wiesbaden offense of old. The Warriors scored just 31 points over their last three games combined, losing two of those by a combined 11 points.

If Lakenheath can avoid falling behind, there’s a chance for the opportunistic Lancers to hand Wiesbaden another close loss.