Will this be another record-breaking season? Humphreys' Jaylan Horne, performing the long jump, is one of six boys athletes returning to a Blackhawks team that won the first Far East banner in school history last May. (Vaughne Medenilla/Special to Stripes)

Humphreys' Jaylan Horne, performing the long jump, is one of six boys athletes returning to a Blackhawks team that won the first Far East banner in school history last May. (Vaughne Medenilla/Special to Stripes) 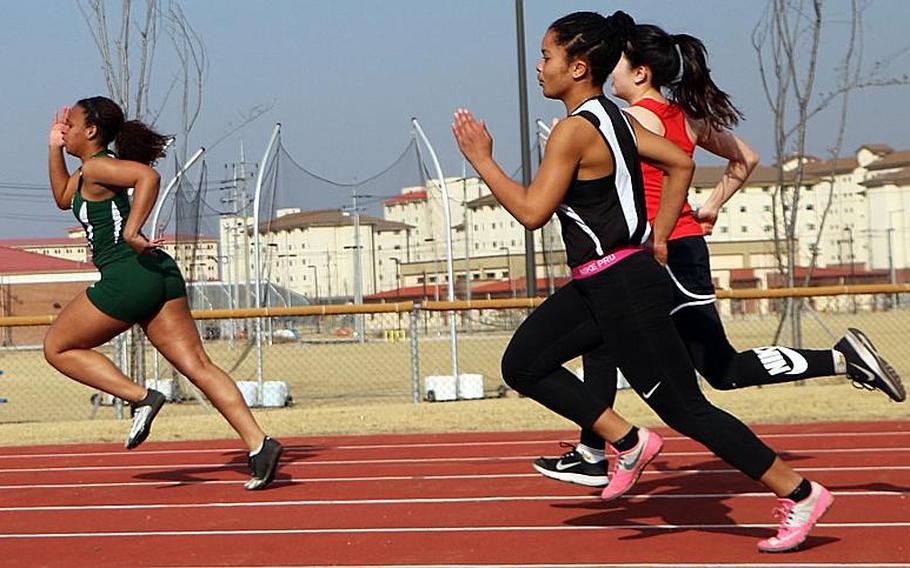 Daegu's Katrina Vasquez leads the pack in the 200 during Saturday's season-opening meet at Humphreys. Trailing Vasquez are Cleopatra Cody of Humphreys and Audrey Choi of Yongsan. (Vaughne Medenilla/Special to Stripes) 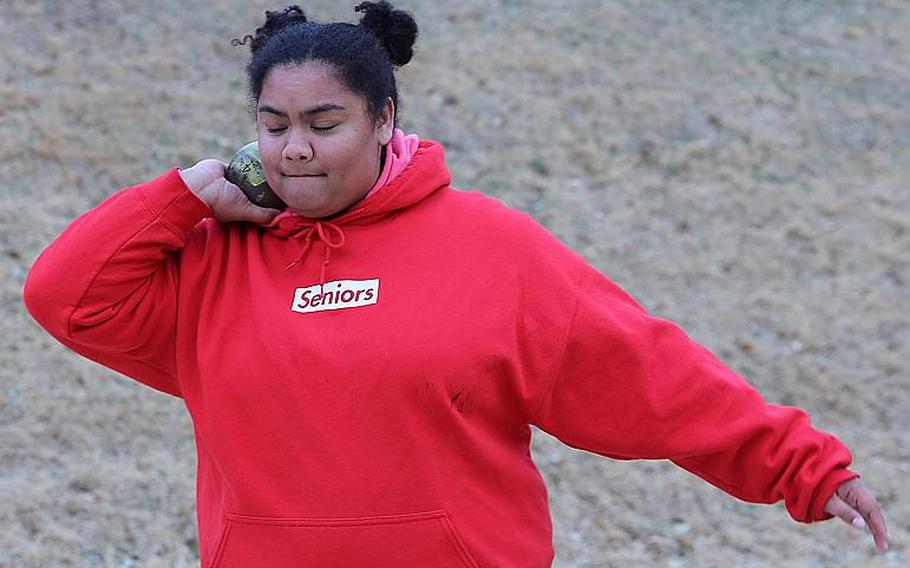 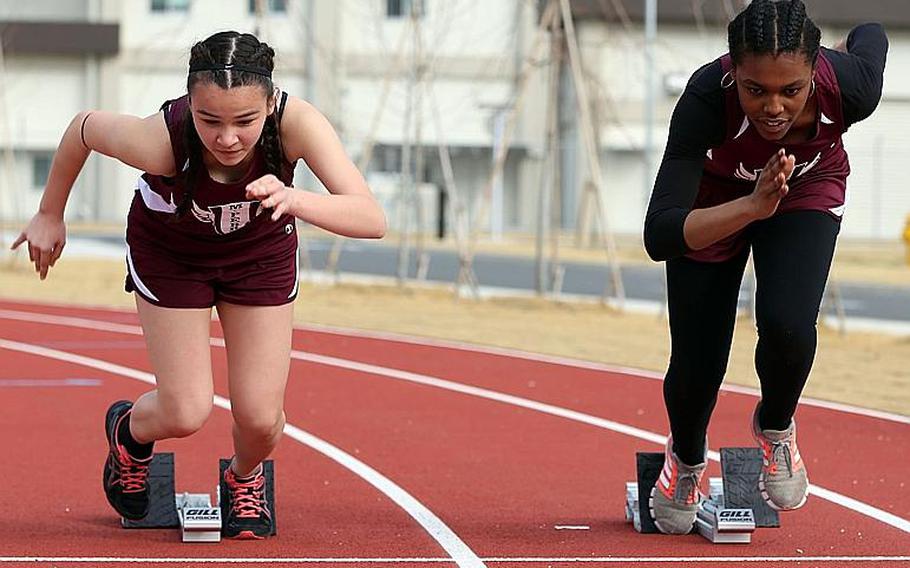 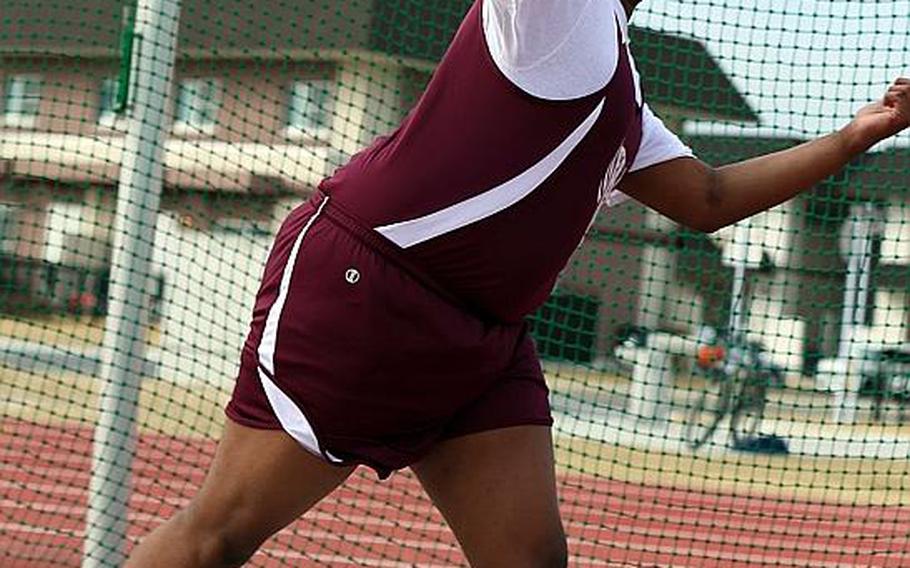 Senior Robert Wall will do throws for Matthew C. Perry, making its debut as a track program. (Kevin Rossiter/Special to Stripes) 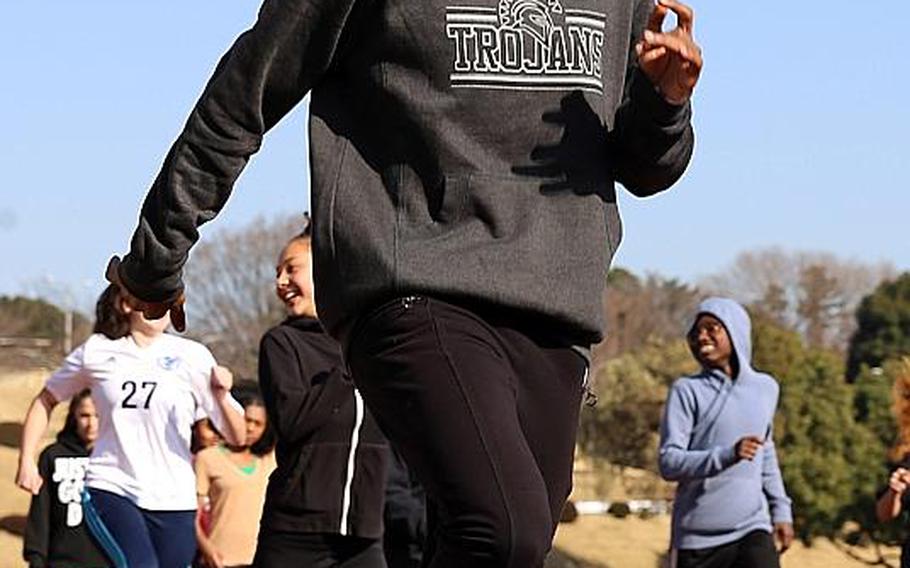 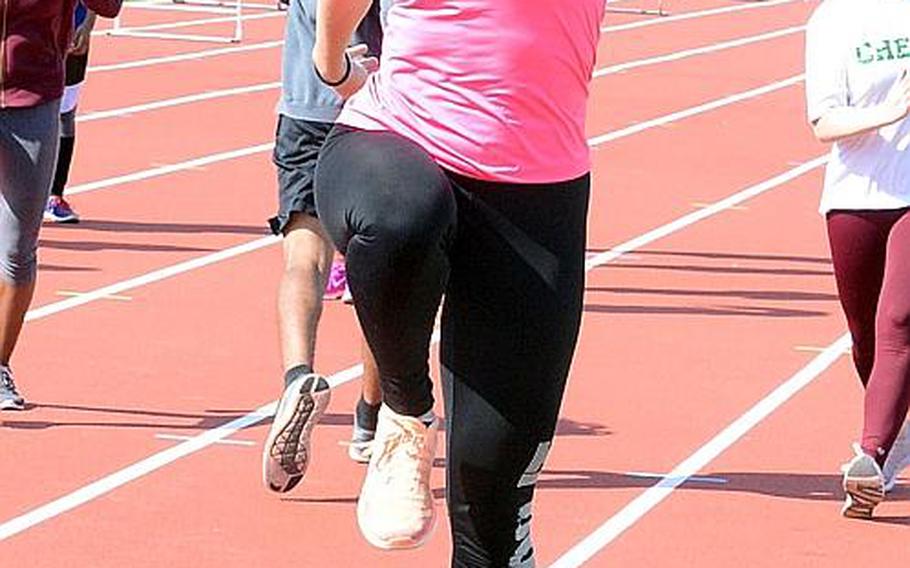 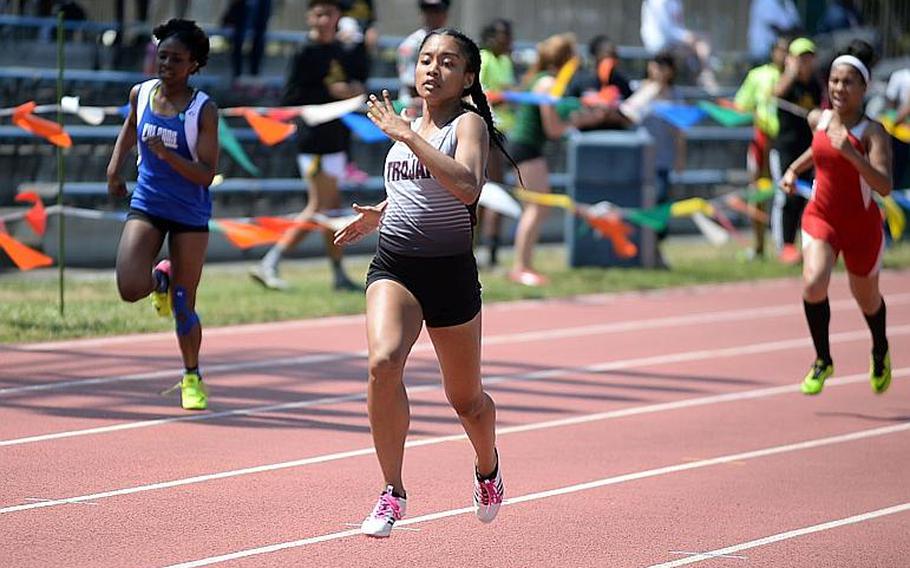 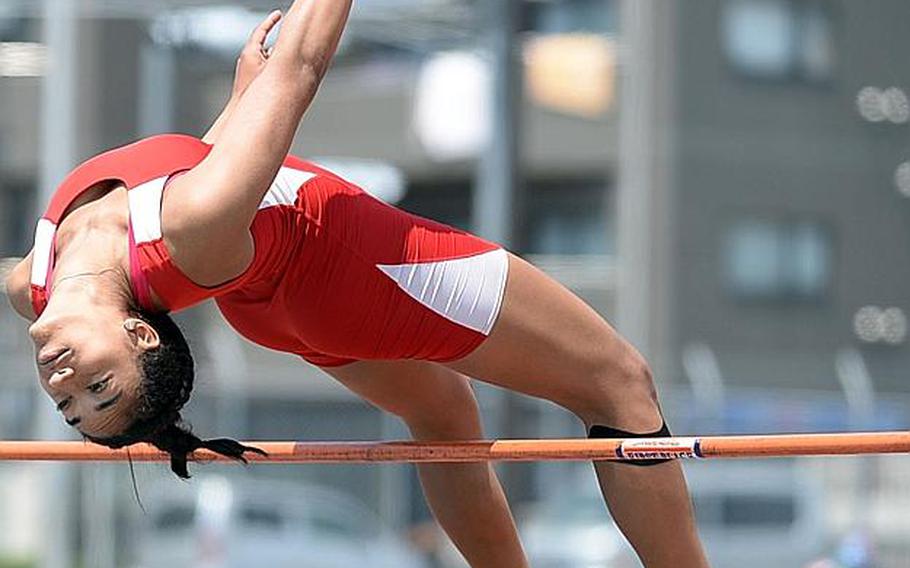 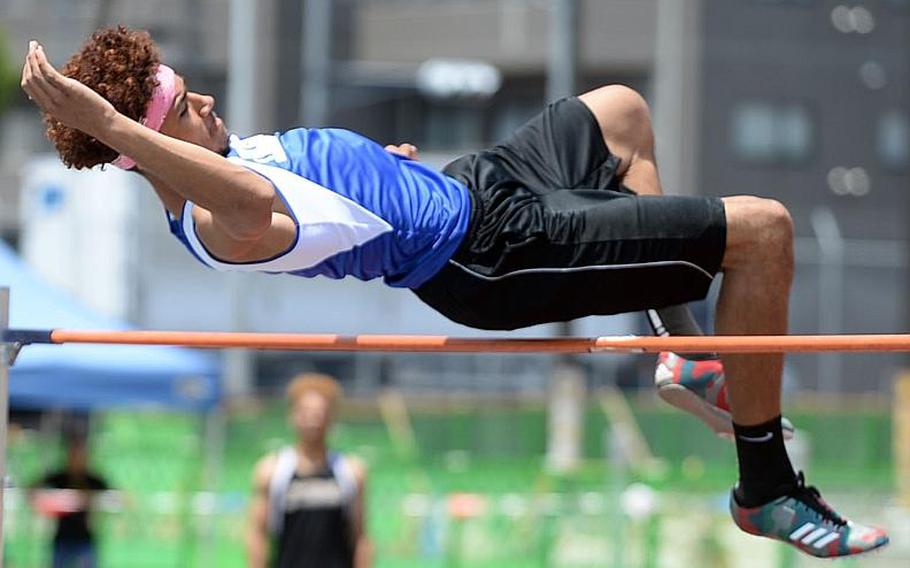 Buy Photo
Senior Juan Guerrero is projected to do jumps and hurdles for Kubasaki. (Dave Ornauer/Stars and Stripes) 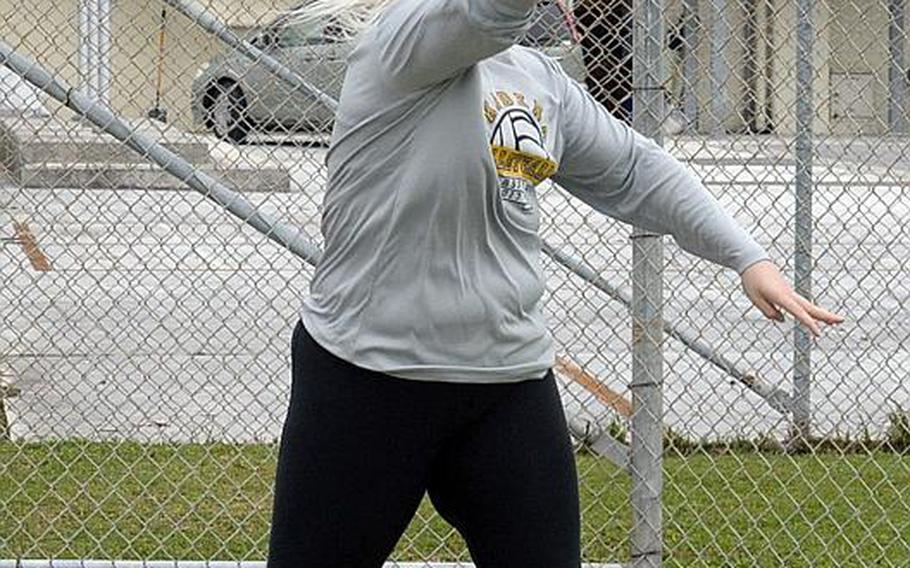 Buy Photo
Senior Lauren Erp returns to track and field to throw discus and shot put after a season of playing softball for Kadena. (Dave Ornauer/Stars and Stripes) 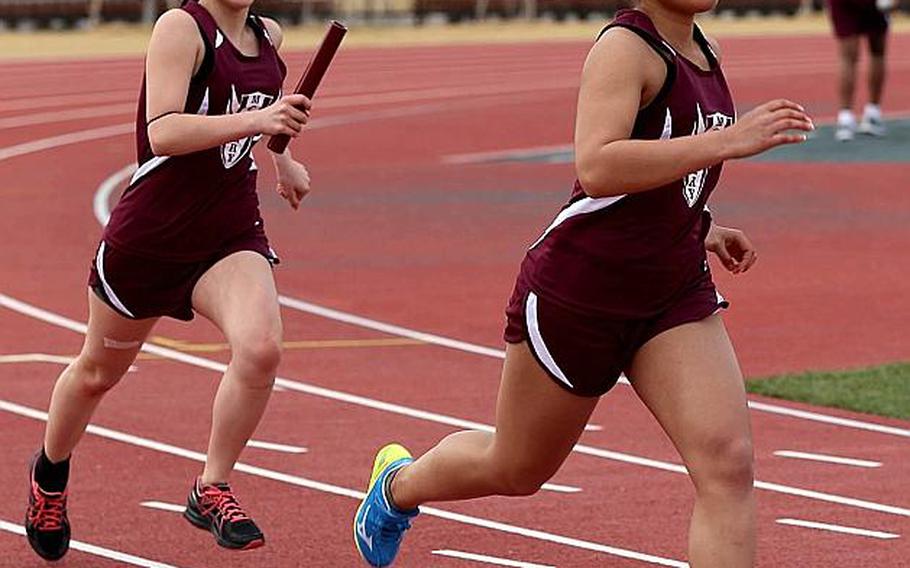 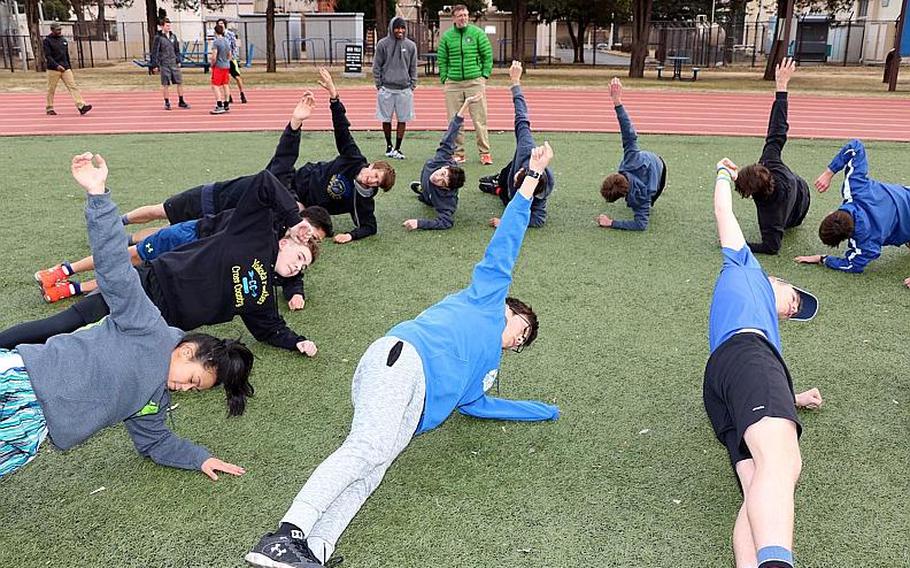 Yokota track and field athlletes warm up under the watchful eye of coach Dan Galvin, background. (Greg Holladay/Special to Stripes) 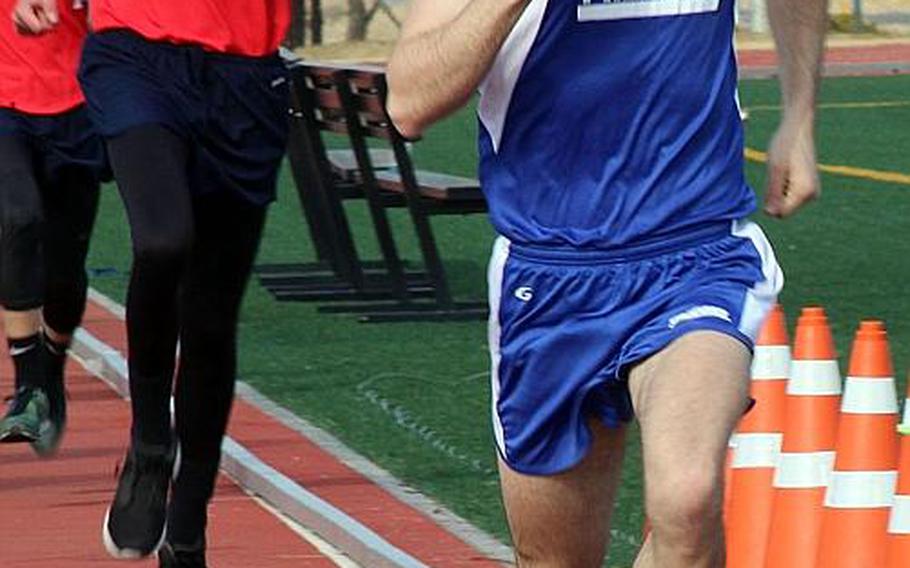 Senior Thomas Curren is projected to do sprints for Daegu. (Angela Root/Special to Stripes) 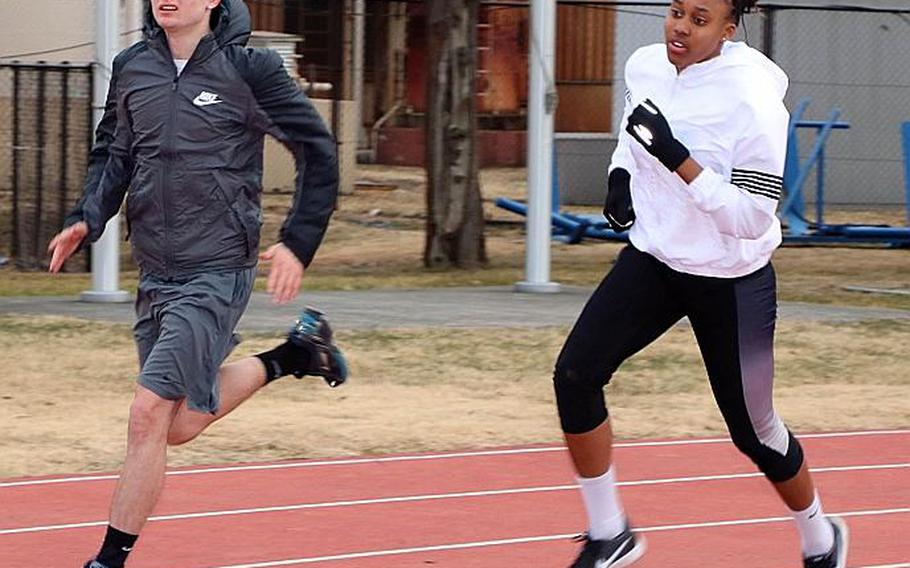 Yokota sprinters Xavier Harris and Britney Bailey make their way around the far turn during practice. (Greg Holladay/Special to Stripes) 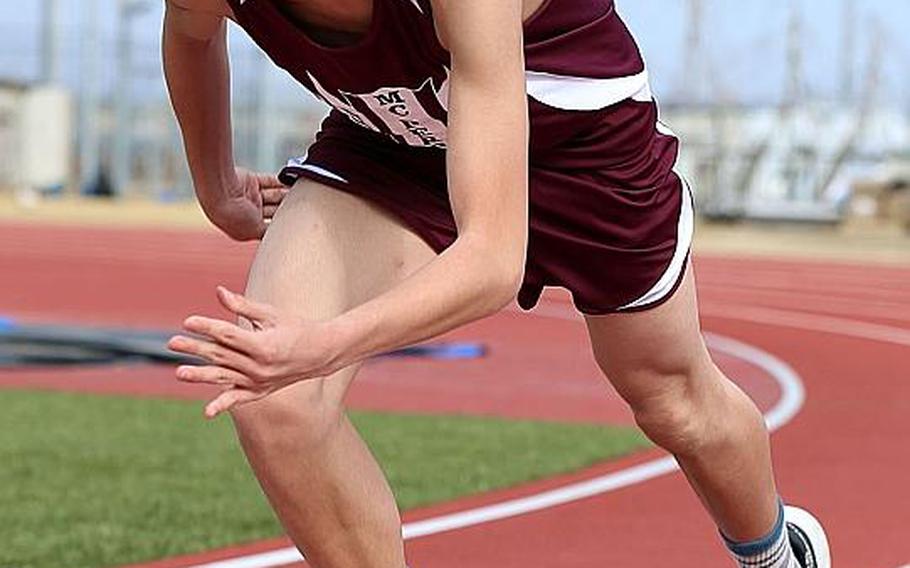 Exotica Hall is perhaps best known for achieving high heights in the Pacific’s high school high jump pits. In the Kanto finals last May, she reached 1.65 meters, nearly 5½ feet, just a couple of millimeters short of the northwest Pacific record.

But the Nile C. Kinnick senior isn’t limited to jumping; she’s much more balanced and versatile, according to coach Luke Voth.

“She’s almost competing against herself; she just wants to be as good as she can be,” Voth said. “I can put her in distance running, throwing; she’s got that nature of an athlete.”

She has said she plans to put the northwest Pacific’s 7-year-old high-jump mark of 1.67 within her sights by the time Far East comes along, May 21-22 at Yokota.

Asked if she has a chance at topping the mark set in 2011 by Ashley Arellano of Guam’s Simon Sanchez, Voth replied: “Exotica is definitely strong.”

“They’re training hard,” Voth said. “But Kanto is so distance-kid heavy; they have a hard time” with some of the best from American School In Japan, Seisen and Christian Academy Japan.

While Voth enters his sixth season at the Devils’ helm, Zama welcomes a new coach, Veronica Jones, who has taught at the school for 16 years but will coach track and field there for the first time.

Like Kinnick, the Trojans have a vast pool of athletes, 50 at this point, Jones said.

“We’re not sure about the quality just yet,” she said. “We definitely want to contend. But it’s going to be a different focus for us. We don’t have the depth that we’ve had.”

While veterans such as senior Faith Bryant return, three-quarters of her relay team that set the region 400 relay record (48.54) last season has either graduated or transferred. “There are potential new runners … I believe if we train hard enough, we can pull through,” Bryant said.

One school that may challenge Zama for D-II rights is Humphreys, which continues to grow thanks to the move of student-athletes from Seoul American. One of them, junior Quintin Metcalf, could challenge for the Pacific’s high-jump mark of 2 meters; his personal best is 1.88.

The Blackhawks boys won the school’s first Far East banner with nine athletes. Six of them are back, and coach Ron Merriwether says he feels the girls program can compete for title hardware as well.

All D-II schools will face new competition in the form of Matthew C. Perry, a school whose enrollment is growing thanks to moving of units from Naval Air Facility Atsugi southwest. The Samurai hit the track for their first meet on March 17 at Yokota.

“We’re all anxious and excited to see where the season takes us,” said Samurai coach Anna Simmermon.

Another athlete making a run at a Pacific record could be Seoul American’s Alyse Neal. The diminutive senior long-jumper shattered the Far East meet record last May with a 5.30 and is aiming for the region mark of 5.42 set 12 years ago.

“The greater the field, the more you have the elite rising to the top,” longtime Pacific track observer Bruce Carrick said. “And we’ve had good luck the last 10 years with coaches who know what they’re doing, they’re dedicated.”