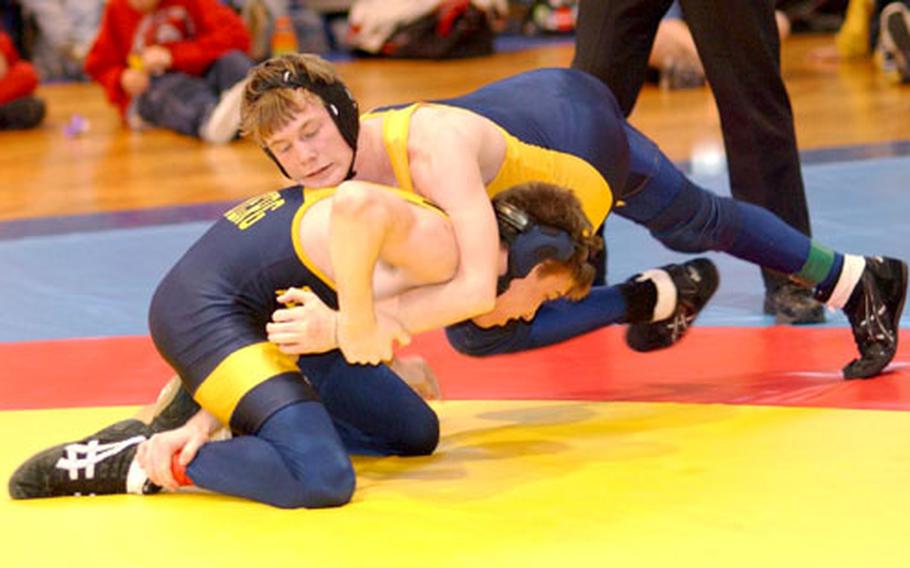 WIESBADEN, Germany &#8212; Considering what Wiesbaden senior Tony Gagnon has been through in the past year, wrestling in this weekend&#8217;s European championships might seem like a walk in the park.

Last season, Gagnon dropped a 5-4 decision in overtime in the 145-pound final. Still, the second-place finish was remarkable because he wrestled all season with a torn anterior cruciate ligament and a 6-inch titanium plate in his leg to heal a fracture suffered while playing football.

Gagnon, 18, then had an operation to repair the torn ligament and underwent jaw surgery, which required him to forgo solid food for six weeks.

Because of all of his injuries and surgeries, Gagnon didn&#8217;t start physical training until October &#8212; he missed his senior football season.

But Gagnon took it all in stride, making what contributions he could.

In December, Gagnon finally returned to the wrestling mats.

So was his doctor.

&#8220;The doctor said there was some risk of serious long-term injury,&#8221; said Gagnon, who took up wrestling as a Vicenza seventh-grader and who&#8217;s been at Wiesbaden for his entire high school career.

Instead of quitting, Gagnon has put himself in position to win the 145-pound European title that eluded him last year. He credits his teammates for bringing him back to that point.

Alexander said the benefits of quality opposition in practice run both ways.

&#8220;His technique is really good,&#8221; Alexander said. &#8220;Normally in Europe, wrestlers with good technique are really dispersed in different schools. Getting to wrestle someone that good every day is a real advantage.&#8221;

Gagnon said he finds another advantage in film study.

Although Gagnon says &#8220;basics, basics, basics&#8221; are the keys to victory, Jewell sees plenty of creativity in Gagnon.

In the 145-pound class this weekend at the Wiesbaden Army Airfield gym, Gagnon will see tough competition from the other regional champs: defending 140-pound champion Karl Saucier of Ramstein; Alconbury&#8217;s Kyle Lucas; and Vicenza&#8217;s Gary King.

Wiesbaden&#8217;s Tony Gagnon, top, tries to flip Heidelberg&#8217;s Jeremy Brady during the 2004 DODDS Division I championships in Schweinfurt, Germany. Gagnon won the Div. I title last year despite wrestling with a torn ACL.