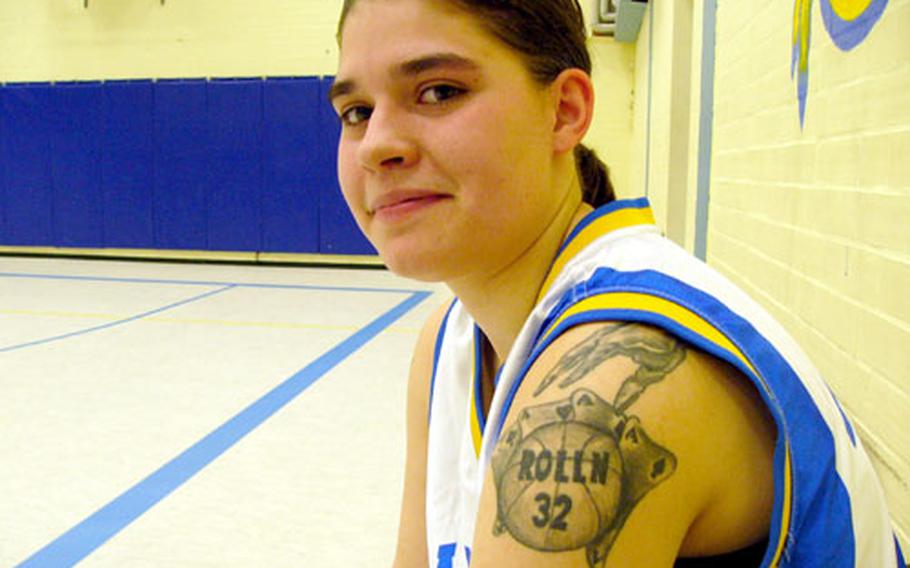 WIESBADEN, Germany &#8212; In her fourth year as a starter for the Wiesbaden varsity basketball team, Nancy Jensen has become more than a game-time mainstay. She has also become a mentor to a youthful Lady Warriors squad that suits five freshman.

&#8220;It makes me feel good to play with all the young players,&#8221; she said Tuesday, moments after leading a defensive charge that helped Wiesbaden pin the first defeat of the season on visiting Kaiserslautern (5-1), 37-21.

Helping her team upset one of the favorites for this season&#8217;s European Division I championship is a good feeling for Jensen. It&#8217;s even better, she said, than winning last fall&#8217;s doubles title in tennis with partner Jessica Smith.

&#8220;It was fantastic to beat (Kaiserslautern). They came in here hoping to roll over us, but we were more connected, more of a family, than we were in our earlier games.&#8221;

On the floor, the 6-foot Jensen, who is averaging eight points, nine rebounds and 3.5 steals per game, becomes the family&#8217;s defender, its hustling but tranquil attack dog.

Tuesday&#8217;s game, which evened Wiesbaden&#8217;s record at 3-3, was a case in point. Only one Lady Raiders player, All-European Latanya Wilson, scored in double figures (11). Kaiserslautern found the middle closed to it by Jensen and fellow senior Lakendra Washington. Moreover, Jensen and Washington swept the glass with 12 and 11 rebounds, respectively.

Jensen&#8217;s on her way to a bigger stage &#8212; playing basketball at NAIA Missouri Valley College in Marshall, Mo. &#8212; but said she has relished her time as a Lady Warrior thoroughly.

And when things get stressful, Jensen indicated the Lady Warriors are welcome to look to her, just as they have all season.