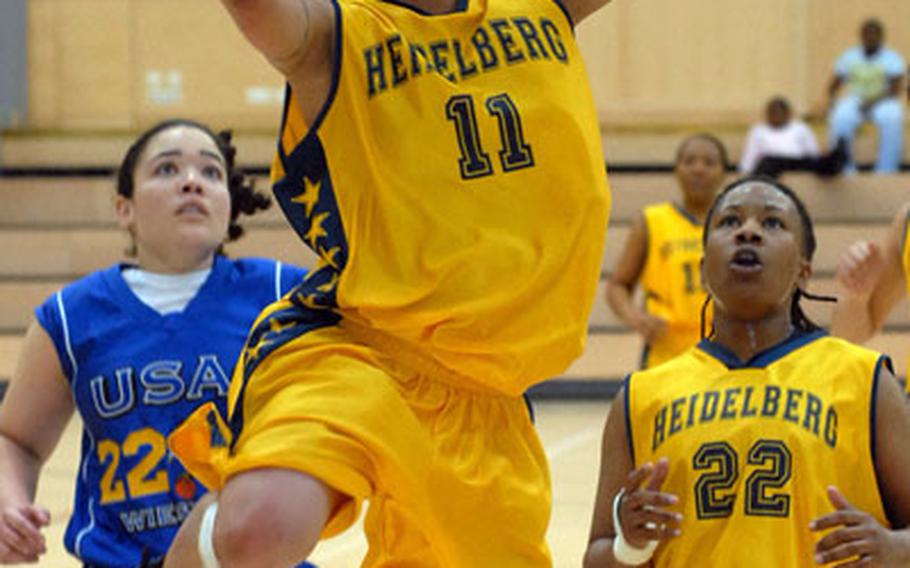 Heidelberg&#39;s Jacinta Ojannaka goes in for a layup in Heidelberg&#39;s 50-36 victory over Wiesbaden in the if-necessary game at the 2007 Army Europe Community Level Basketball Championships in Wiesbaden on Sunday night. (Michael Abrams / S&S)

Heidelberg&#39;s Jacinta Ojannaka goes in for a layup in Heidelberg&#39;s 50-36 victory over Wiesbaden in the if-necessary game at the 2007 Army Europe Community Level Basketball Championships in Wiesbaden on Sunday night. (Michael Abrams / S&S) 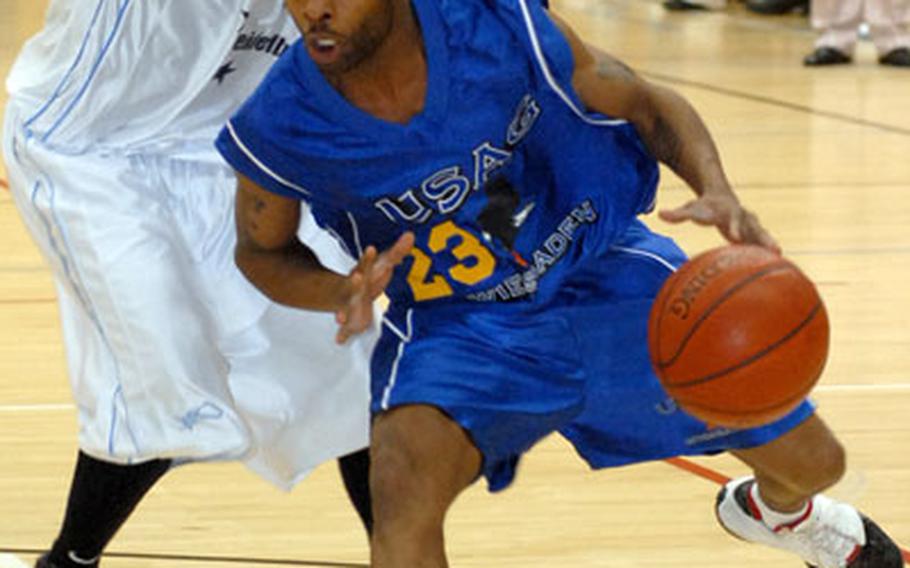 Wiesbaden&#8217;s men rebounded from a 79-69 defeat to Heidelberg on Sunday afternoon to retain their Army-Europe title with a 73-46 romp over Heidelberg in Sunday night&#8217;s if-necessary game. Similarly, Heidelberg&#8217;s women shrugged off a 54-46 afternoon loss to Wiesbaden and put the crown away with a 50-36 victory Sunday evening.

Brooks was one of three Heidelberg players in double-figures in the nightcap. Tourney MVP Jacinta Ojannaka, who posted a game-high 16 points in the opening loss, scored 12 points, and guard Fontella Ross added 10.

Atasha Potter, who scored 15 points in the first game and a team-high 11 in the nightcap, led Wiesbaden, which was playing its third game of the day.

MenWiesbaden 73, Heidelberg 46:After being pushed around by Heidelberg big men Rodney Bailey, Kenyatta Mack and Harry Davis in the first showdown, Wiesbaden changed its plan of attack.

Wiesbaden coach William Satterwhite said up-tempo was the only way to go against a veteran Heidelberg team that was playing for the third time on Sunday. The Generals eliminated Mannheim 45-41 in a noontime losers-bracket final.

Wiesbaden&#8217;s Mike Joyner, 5-for-6 from the floor in his 12-point night in the title game, followed the plan to the letter. His teammate, tourney MVP Chris Everett, added seven points after a 20-point outing in the opener.