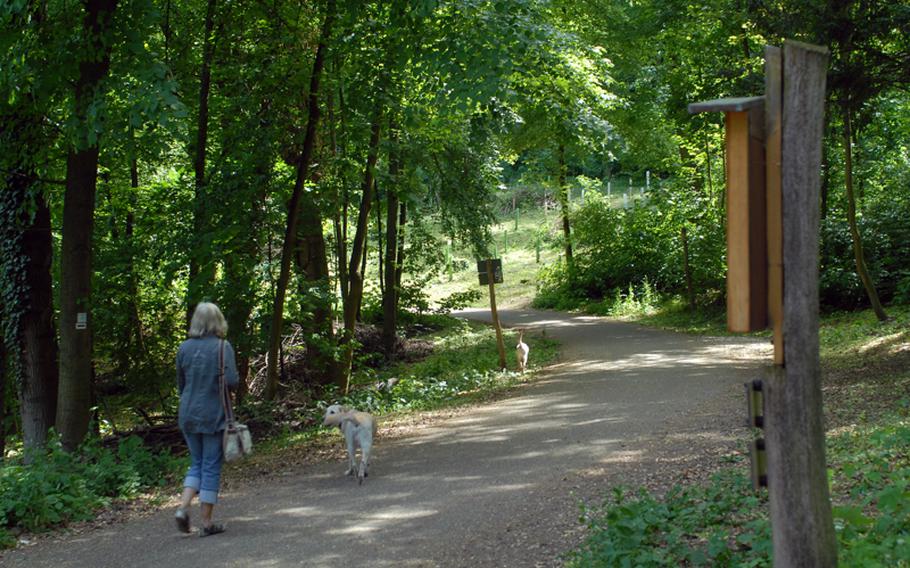 The three paths through the Exotenwald in Weihneim, Germany -- 1?? miles, two miles and 2?? miles -- can be enjoyed on two legs and four. (Nancy Montgomery/Stars and Stripes)

The three paths through the Exotenwald in Weihneim, Germany -- 1?? miles, two miles and 2?? miles -- can be enjoyed on two legs and four. (Nancy Montgomery/Stars and Stripes) 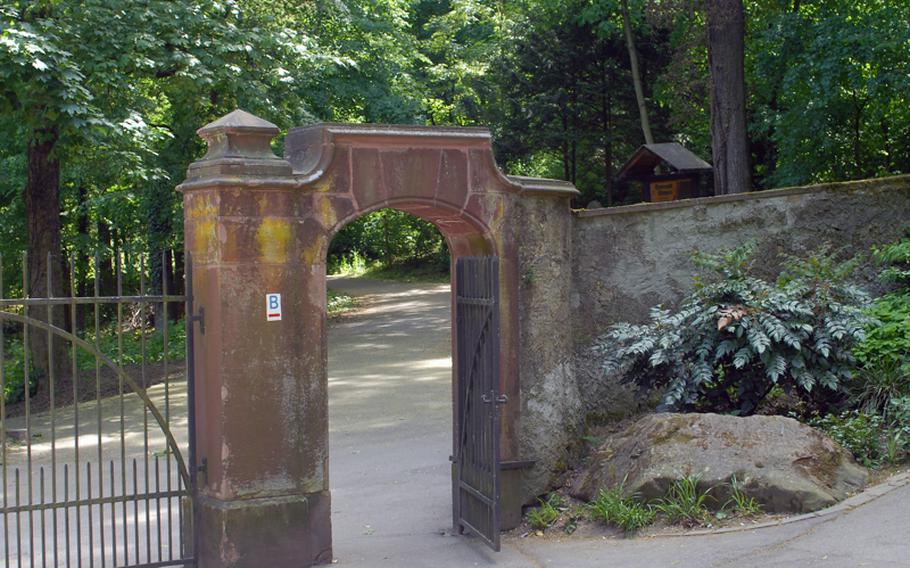 Entry from Wienheim's Schlosspark to the city's Exotenwald, or exotic wood, is through an old stone gate. There is no admission charge for the woods. (Nancy Montgomery/Stars and Stripes) 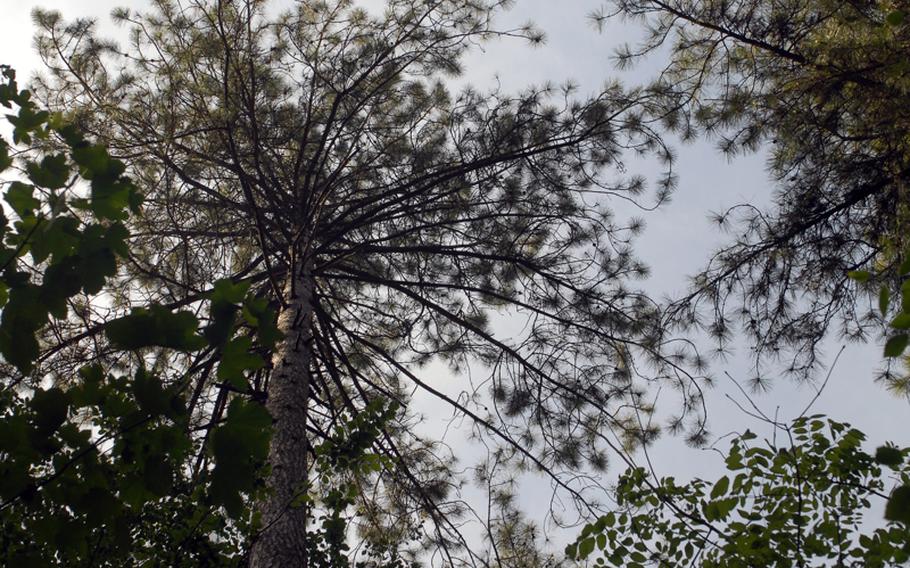 Corsican pines, one of many types of pines in the Exotenwald, were planted in 1881. (Nancy Montgomery/Stars and Stripes) 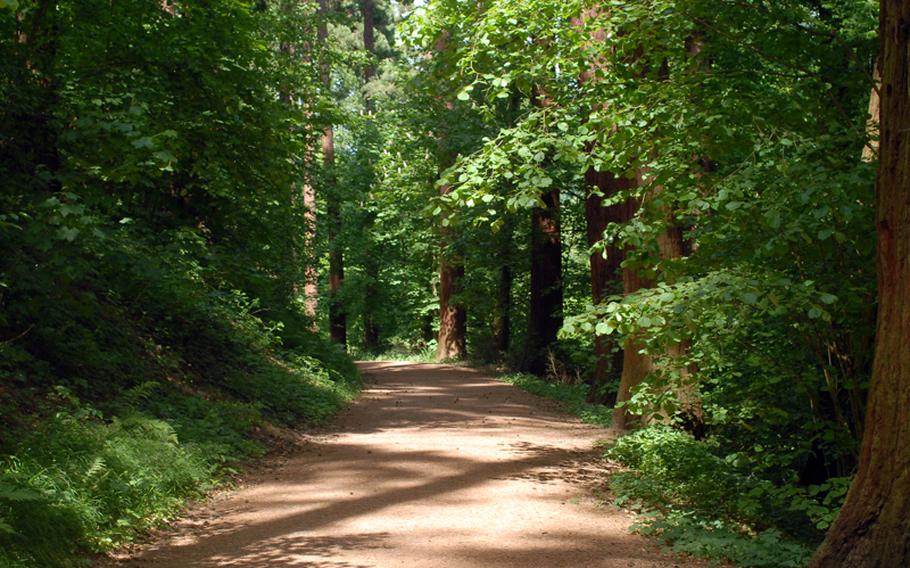 Giant Sequoia saplings were brought to Weinheim ?by ship 20 years after their discovery in California in 1852. The huge trees made news worldwide and in London cost 40 gold marks each, according to the Exotenwald sign about the trees. (Nancy Montgomery/Stars and Stripes) 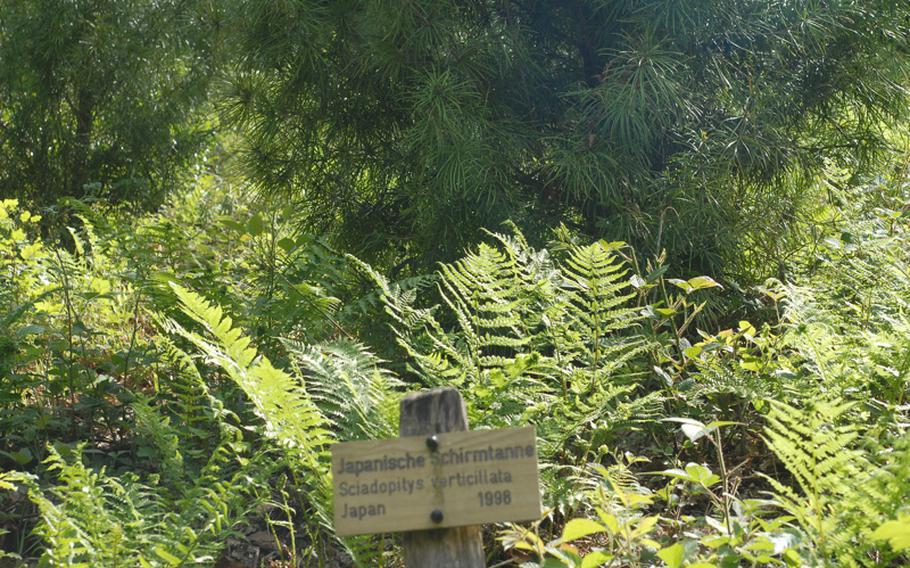 Signs in the Exotenwald identify trees in German and Latin.? (Nancy Montgomery/Stars and Stripes)

Three paths diverge within a woods: Should you take the one least traveled?

In the Exotenwald, or exotic forest, in the city of Weinheim, Germany, it doesn’t really matter. All three paths will take you into the heart of all that’s green, woodsy, fragrant and calm.

And because it’s in Germany, there are also lessons to be learned along the way. Do you know, for example, when the world discovered California’s giant sequoias? A sign in the Exotenwald will tell you (1852).

The 111-acre woods leads from a gate in the city’s Schlosspark, itself a lovely place to spend a few hours. Where the park is grassy and floral, though, the woods are more mysterious, dappled and winding. And they come with a back story.

Christian Friedrich Gustav Freiherr von Berckheim, a courtier at the baronial court in Karlsruhe, started the arboretum in 1871 on the grounds of an estate. Why he did it is unclear, but von Berckheim was responsible for planting some 12,500 trees on 88 acres over the next decade. The most impressive were the sequoia trees, shipped from the Sierra Nevada Mountains in California to London and then transported by boat and wagon to Weinheim.

The trees were then 4 years old, in pots of their own and cost the equivalent of about $20 a tree. There are dozens of them remaining, now 180 feet tall.

His immediate heirs were less interested in the woods and neglected the aboretum; many of the trees died. But when a grandson, Christian Philipp Graf von Berckheim, inherited the estate, he planted 20 acres more, focusing on trees from Asia, especially Japan.

Today, it features some 130 species of trees from 18 forest regions around the world.

A sign just inside the woods shows a map of the trails and the numerous trees along them. The three circular paths vary in distance; one is 1½ miles, another is two miles and the third is 2¾ miles. Signs about the trees, including Chilean monkey puzzle, Japanese and North American magnolia trees and Californian river cedars, pop up here and there. The signs describe the trees’ characteristics, tell when they were planted and give other information on history and care.

Unfortunately, the signs are written in German — with Latin — so full understanding is unlikely for English speakers. It’s still a nice walk, though, quiet and peaceful with the sounds of singing birds.

All three paths are mostly strollable, nothing challenging. I saw a man in a motorized wheelchair zipping down one of them, as well as a bicyclist, some runners, some lovers and some dogs.

The woods are accessible throughout the year, with each season providing its own kind of charm.