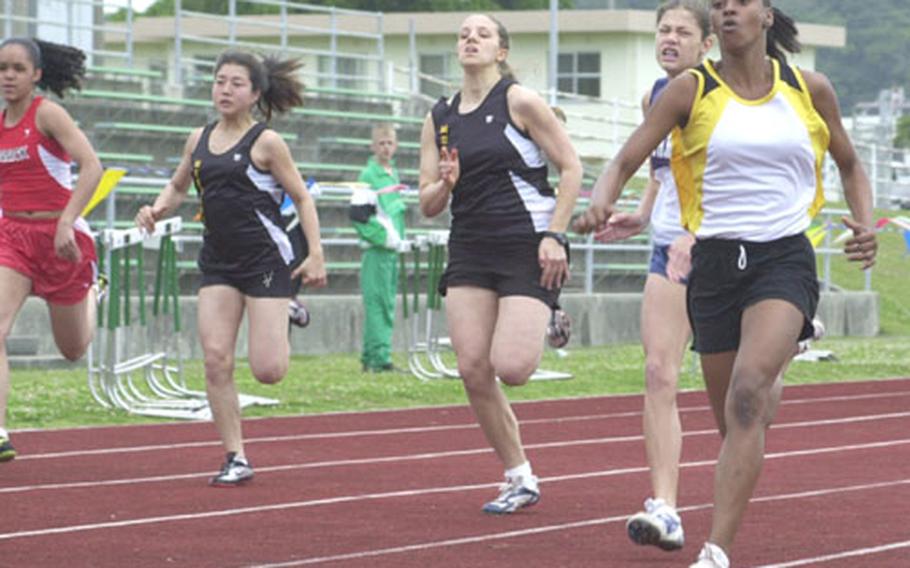 CAMP FOSTER, Okinawa &#8212; It seemed an impossible task. Kadena&#8217;s boys relay team, after dropping the baton on the first exchange, trailed by 45 meters with the two longest legs of the 1,600 medley left to run.

It was one of four gold medals Watkins won Saturday. He collected five overall, pacing Kadena to the boys title in the Second Annual Dr. Alva W. &#8220;Mike&#8221; Petty Memorial Track and Field Meet at the stadium named for him.

Kadena scored 125 points, outdistancing St. Mary&#8217;s International of Tokyo (96) and Japan&#8217;s Nile C. Kinnick, which managed 83 points with only five competitors. Kubasaki&#8217;s girls (100) finished nine points ahead of the American School In Japan and 12 in front of Kadena.

Running the 400-meter leg, as Watkins did, Smith erased a 25-meter deficit, passing Kadena&#8217;s Vanna Carawan on the final turn and never looking back. Kubasaki finished in 4:29.65, 11.36 seconds better than Kadena.

But of all the achievements at &#8220;Petty II,&#8221; in which every event record was rewritten, the Watkins-fueled medley relay comeback was the most improbable, even surprising coach Jim Daniel.

Keith Loving, running the first of two 200-meter legs, failed to hook up with McCowan on the back stretch. McCowan had to run back 10 meters to retrieve the baton, then restart his engines to get it to Watkins.

Watkins did much the same in the other two relays, the 400 and 1,600, sprinting the 400 meters in 50.87 after claiming the long-jump gold Friday. His 400 victory handed Kinnick&#8217;s Brenden Lynce his first loss in 11 individual events this season.

Brenden Lynce&#8217;s trifecta included a gold in his very first try at the 100. He sprinted to an event-record 11.46 seconds, mere minutes after breaking the Petty record in the 110 hurdles with a time of 15.63.