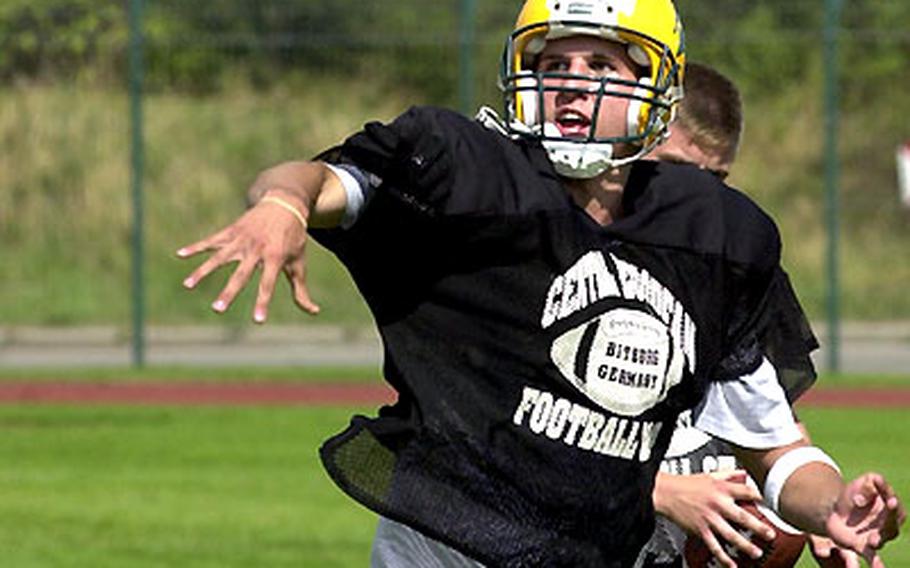 Ryan Rice of SHAPE releases a pass during a session at the European Football Camp in Bitburg, Germany. (Michael Abrams / S&S)

If Saturday&#8217;s opening game of the 2003 season is any indication, they need to keep trying.

Rice completed eight of 10 passes for 116 yards in a 42-13 victory over Bitburg. He also ran for a touchdown as SHAPE amassed 344 yards in total offense.

The senior signal caller was quick to credit his teammates for his success.

In Saturday&#8217;s game, &#8220;the offensive line did great,&#8221; Rice said Monday as he and some teammates joined coach Kregg Kappenman for a bit of lunch-hour film study.

SHAPE&#8217;s line does more than form pockets this season. They also carve holes. Running back Brandon Glenn ran for 199 yards on Saturday.

A strong line and tough running game should make Rice even harder to handle this season, Kappenman said.

As evidenced by Saturday&#8217;s numbers. Rice will be asked to throw this season, too.

The reason for all this growth in Rice&#8217;s game becomes more understandable when he tells you where it comes from.

Turns out, it was a labor of love.

When his SHAPE career is over, Rice plans to concentrate on basketball. He said he had an offer to play at Allegany College in Maryland, a two-year school noted for feeding D-I prospects to the University of Maryland.

He said he didn&#8217;t mind spending his high school career so far from the U.S. spotlight.

Next up for Rice and his SHAPE teammates is a date Saturday at International School of Brussels, against the defending D-II champs. A victory would be a giant step toward SHAPE&#8217;s 2003 goal.