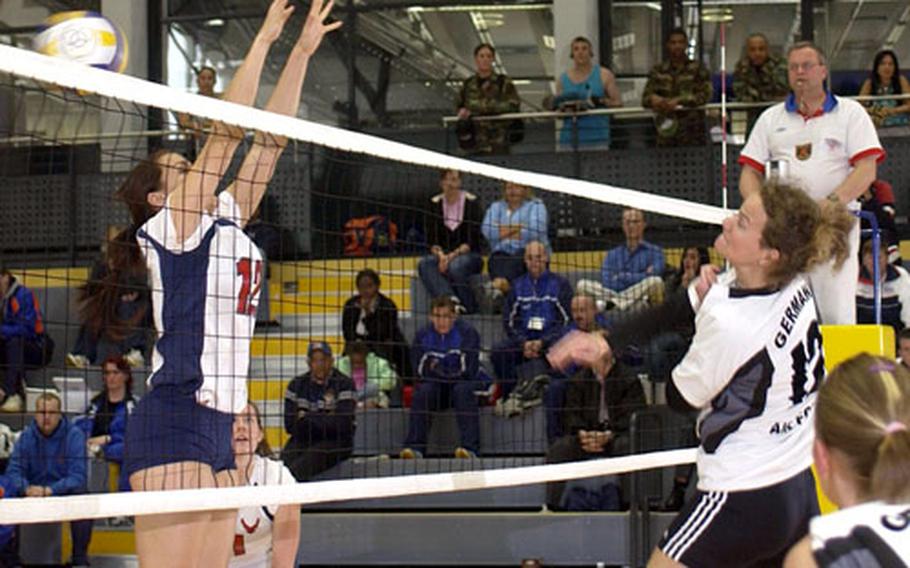 &#8220;They played us differently this morning,&#8221; said Molly Stowers of Eglin Air Force Base, Fla., who had six kills, including the match-winner, in the final game.

Piasecki showed plenty of juice in the afternoon, launching a high-velocity jump serve that fueled German runs all afternoon and uncorking blistering spikes whenever she got to the net.

&#8220;Molly and I were laughing back there waiting to receive it,&#8221; Alice Bartek of Aviano Air Base in Italy said of the Piasecki service rocket.

The U.S. won five matches in this three-day event without losing a game, but the Germans came close in the first game of the title match.

With her team trailing 22-17, Piasecki served four straight points to cut the gap to 22-21. A Stowers kill moments later had the Americans poised at 24-21, but three U.S. errors and a Piasecki kill put the Germans up 25-24. It took a German error, an ace by Hally Homan and a Stowers kill to put the game away.

Despite their lopsided run through the five-team event, Stowers said her team, which came together for just 12 days for this event, benefited from the experience.

The Netherlands beat Belgium 2 games to 0 to finish third.

The victory was USAFE&#8217;s second of the day and second of the tournament. Both came against winless RAF, which dropped its final pool-play match to the U.S. 25-17, 25-13 in the morning.

With the U.S. down 11-9 in the deciding game, Klemas, who posted four kills, a dink and an ace in the final game, served six straight points to put the Americans ahead to stay at 15-11.

The U.S. lost its first four matches here, all by 2-1 scores.