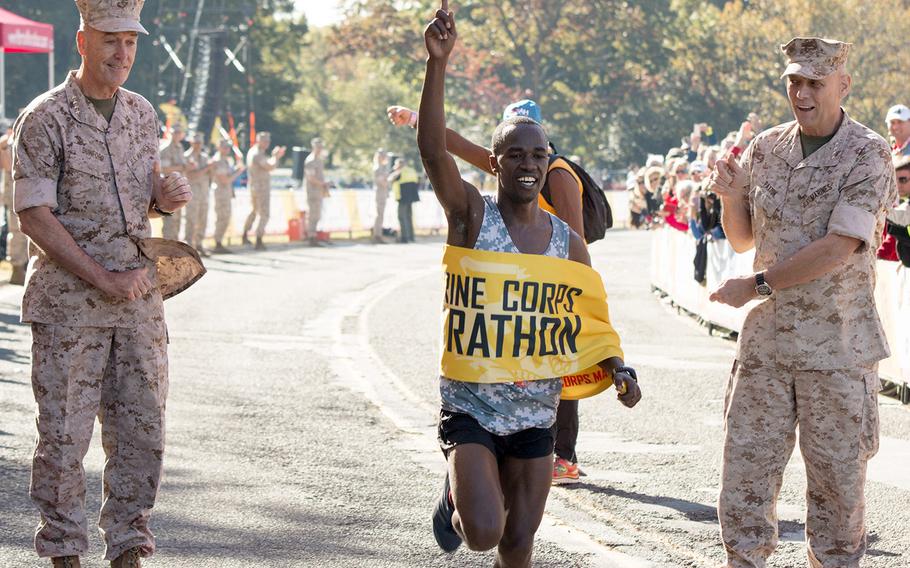 ARLINGTON, Va. — In a race kicked off by a recent Medal of Honor recipient skydiving to the start line, Army soldiers on Sunday captured the top spots in both male and female divisions of the 2014 Marine Corps Marathon.

For Curran, a field artillery officer based at Fort Dix, N.J., it was the military camaraderie and the memory of a friend and fellow soldier killed in combat that got her through the race. Curran, 28, ran with the initials A.W.S. drawn on her left hand to honor 1st Lt. Ashley White-Stumpf, who was killed by an IED in Afghanistan in October, 2011.

“I think seeing all the wounded warriors out there, seeing everybody screaming, and the flags, it’s just one of those events that pumps you up the whole way,” Curran said. “When you’re hurting and sucking … that extra push will get you through.”

That energy also propelled Kosgei to first place, and the Army medic hopes that’ll be his ticket to the Army’s World Class Athlete Program and through that, the 2016 Olympics.

“The last six miles, my mind was not on the miles remaining,” Kosgei said. “I was just listening. Everybody was supporting me, (saying) ‘Let’s go Army’. It was amazing.”

In the women’s division, Lindsay Wilkins of Arlington, Va., placed second with a time of 2:51:46 and Navy Lt. Gina Slaby finished at 2:52:31 at her fifth consecutive Marine Corps Marathon.

“This marathon means a lot to me,” said Turner, who runs for the All-Navy team. “D.C. is a big Navy town. It’s just incredible to be able to represent the Navy.”

More than 8,000 active-duty servicemembers and veterans were among the more than 26,000 registered participants in the race, now in its 39th year.

Among the veterans was Kyle Carpenter, a medically-retired Marine who was awarded the Medal of Honor in June for diving on a grenade to save a fellow Marine in Afghanistan in 2011. Carpenter finished the race in 5:07 after parachuting to the start line with other veterans, including decorated Vietnam vet retired Marine Col. John Bates and retired Army Sgt. 1st Class Dana Bowman, a double amputee and former member of the Golden Knights.

The skydiving team floated a 7,800 square-foot American flag with them, and also carried flags from each of the military branches and a POW/MIA flag.

The race was Carpenter’s second, and he said that he hopes his participation sets an example for other wounded warriors. Carpenter went through dozens of operations on his road to recovery, including multiple skin grafts, and a new jaw, teeth and prosthetic eye.

“You can get injured and go through a lot and still come out on top,” Carpenter said at a press conference Friday. “You can run a marathon or compete in things you want to, even if you have physical limitations or disabilities. If there’s a will, there’s a way.”