Upstart Admirals will try to take down defending champs 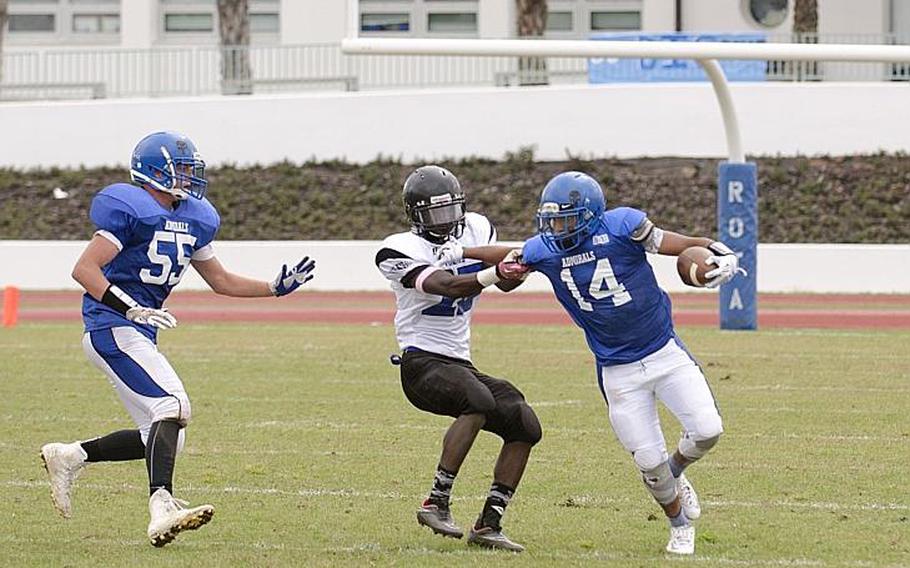 The Rota Admirals have come a long way. That’s true in every sense of the term.

In the figurative sense, the Admirals have executed an amazing two-year turnaround from a winless 2013 season to Saturday’s DODDS-Europe Division II championship game, in which they’ll face defending champion Ansbach at 4 p.m. CET at Kaiserslautern High School.

In the literal sense, they’ll travel some 30 hours by bus to play in that game.

While Saturday’s other three finalists – Ansbach and Division I qualifiers Stuttgart and Wiesbaden – are planning relatively short same-day excursions from their respective home bases around southern Germany, the Admirals will spend the bulk of two days traversing over 2,000 kilometers of Western Europe bound for Kaiserslautern High School.

Rota head coach Ken Walter will do everything he can to maintain his unbeaten team’s momentum in the face of that imposing itinerary.

“I am big on routines,” Walter said. “We are going to stay as close to our normal routine as possible.”

Given its location hundreds of miles clear of any of its DODDS-Europe opponents, such travel isn’t unprecedented for the Admirals. They journeyed to the Benelux twice this year, visiting AFNORTH/Brussels on Sept. 26 and SHAPE on Oct. 10. Rota’s also played at home more often than not, hosting Naples, International School of Brussels and Bitburg in the regular season and Alconbury and Hohenfels in the playoffs.

But that doesn’t change Rota’s predicament this week. The idle time spent cruising through the whole of Spain and France will cost the Admirals two days of practices. Walter said the plan was to fit in three days of practice in Rota, depart early Thursday morning and arrive in Germany sometime Friday afternoon, about 24 hours ahead of game time.

That’s in contrast to Ansbach’s schedule: the Cougars will practice on their home turf all week and bus in from Bavaria on Saturday morning, an agenda made possible by the game’s late afternoon kickoff.

“We would rather sleep in our own beds,” Cougars coach Marcus George said.

Their divergent paths to Saturday’s venue aren’t the only difference between the Admirals and Cougars. The two programs have felt opposite effects of the same phenomenon: namely, the steady constriction and consolidation of United States forces across the continent.

In short, Rota is trending sharply upwards in terms of school population, moving from Division III status in 2012 and potentially headed for a spot in Division I if the trend persists. Ansbach is in a steep decline, to the point that the school’s other sports now play at the Division III level; George has even raised the possibility that his program will fold after this season.

Ultimately, the long-term trends that brought Rota and Ansbach to their respective crossroads converge Saturday at Kaiserslautern, leaving only the relatively simple matter of two football teams playing for one championship.

Top-seeded Rota has a first-year coach in Walter who is new to DODDS-Europe but well-versed in championship-caliber DODEA football after a wildly successful run at South Korea program Daegu. George is a stalwart elder statesman of DODDS-Europe and owner of the organization’s record for career football victories.

Rota finds success offensively behind a backfield stocked with fast, athletic ball carriers such as Andres Torres and Marc Magwood behind a good-sized line of blockers. The Admirals are at once disciplined and explosive, pounding Walter’s playbook and taking advantage of the big breaks it frequently yields.

“We kept things simple to shorten the learning curve,” Walter said of the revamped Rota roster he took over. “And the players worked hard in practice.”

On the other side of the ball, the Admirals eschew the standard DODDS-Europe approach of iron-man football in favor of fielding fresher bodies on defense.

That presents challenges for the Cougars, an unwittingly streamlined defending champion missing several of the key players who fueled last year’s title run. George called Rota “the best team we will play” in terms of skill level, and he’ll need strong efforts from both emerging contributors and returning Cougar stars such as Tyler Benton and Bailey Ward to keep up.

George is also concerned with his team fully recovering from its semifinal clash with notoriously physical Bitburg.

“Healing, rest and recuperation is the order of the week,” George said. “If we are not blocking and tackling by this point, we can’t fix it now.”