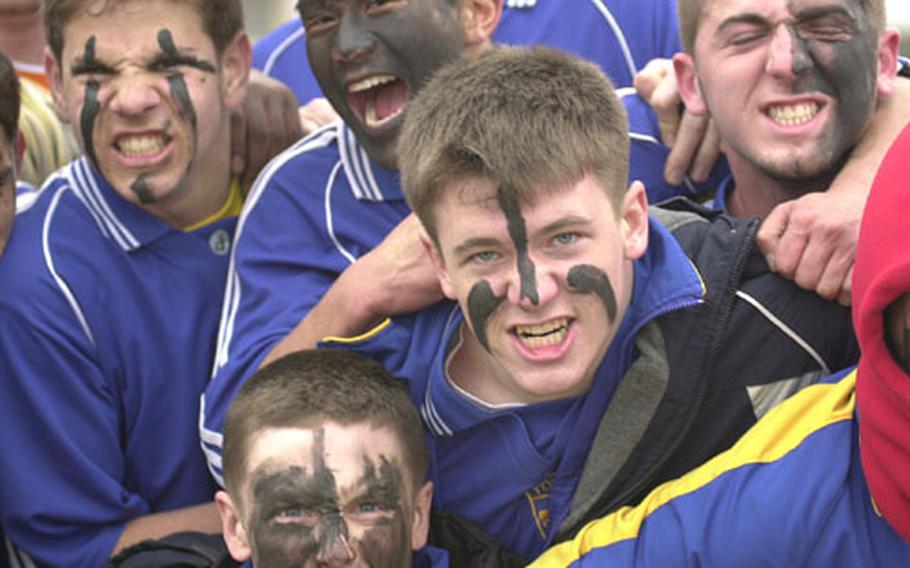 Clockwise from top left, Dennis Keslar, Rae Canlas, Mike Chamberlain, Karl Gerstner, Matt Irwin and Jay Irwin sport their war-painted faces before Saturday&#39;s Japan Soccer League match against the Matthew C. Perry Samurai at Bonk Field, Yokota Air Base, Japan. The Panthers won 8-0. The war paint, partly inspired by the Mel Gibson movie "Braveheart," is the latest fad tried by the Panthers in the past two seasons in the name of teamwork; they sported Mohawk haircuts and carried a statue that they called their "mojo" during last May&#39;s Far East Class AA (large schools) Tournament, in which they finished second. (Dave Ornauer / S&S)

They took to the field with various facial paint designs Saturday, and it seemed to help, as the Panthers shut out the Robert D. Edgren Eagles of Misawa Air Base 5-0 and the Matthew C. Perry Samurai of Iwakuni Marine Corps Air Station 8-0 in Japan Soccer League games.

The craziness began last season during the Panthers&#8217; drive to a second-place finish in the Far East Class AA Tournament.

Two days into the tournament, four Panthers &#8212; Corbett Simon, Matt Irwin, Jake Ward and Karl Gerstner, all returnees this season &#8212; arrived at the field sporting Mohawk haircuts. Others followed suit during the week.

Then before the tournament semifinal, a 6-0 victory over Seoul American, all of Yokota&#8217;s players lined up in front of the bench and rubbed a foot-high porcelain dragon statue, which they called their &#8220;mojo.&#8221;

Their latest fad, the players said, was inspired partly by the movies &#8220;Braveheart&#8221; and &#8220;Gladiator,&#8221; but mostly because of a JSL series they&#8217;d played the weekend before at Iwakuni in ankle-deep mud, some of which got splattered on their faces.

Pujol and his players are pleased to be playing so well in their JSL games, outscoring their opponents 40-1 in tuning up for their Tuesday showdown with Zama American, also unbeaten at 3-0 with a goal margin of 19-1.

Actually, the war paint might end up getting benched.