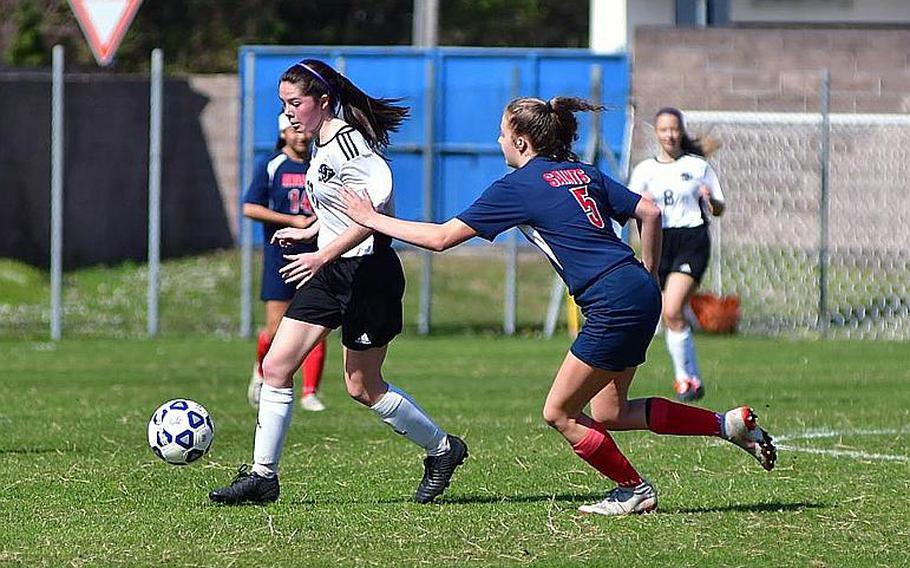 Liv Sullens, a forward for the Stuttgart Panthers, drives past Aviano defenders during Saturday???s game that was played at the Aviano stadium. Sullens scored three times in the game, which the Panthers won easily 7-0. (Norman Llamas/Stars and Stripes)

The final weekend of the DODEA-Europe soccer regular season is one of relatively low pressure and low mileage, comprised mostly of non-division regional games.

But there’s one very notable exception: a marquee girls matchup compelling enough to carry the otherwise calm weekend on its own.

The defending Division I champion Stuttgart Panthers will take on the Wiesbaden Warriors on Saturday in a marquee matchup that is both a battle of the division’s two unbeaten powerhouses and a rematch of the 2017 European championship game, a classic final won by Wiesbaden via penalty-kick shootout.

While both teams know that far more important games await when the tournament opens May 20, neither is planning to hold anything back on Saturday.

“Every conference game this year has been a key to our success, and I feel it is important to the girls to finish the season with another win within the conference,” Wiesbaden coach Nicole Angel said. “They want to finish strong. Another win will give them confidence going into a very tough postseason.”

The Panthers, with just three games on their Division I regular-season schedule including this weekend’s Wiesbaden match, are eager for another taste of high-level Division I competition before they’re immersed in it at the tournament. “We want to be peaking as we enter the tournament, so we want to be playing great soccer at this point in the season,” Stuttgart coach Billy Ratcliff said.

In fact, both teams have been doing that throughout the spring.

Wiesbaden, led by goal-scoring phenom Erin Goodman and senior star Audrey Merhar, boasts an explosive offense that scored 34 goals over its first three games - all against Division I competition. And the Warriors are locked in defensively as well, holding Ramstein, Naples, Vicenza and Black Forest Academy scoreless over their last four matches.

Stuttgart, fielding a typically deep and dangerous roster including prolific goal scorers Liv Sullens and Victoria Antoine, has made the most of its limited divisional opportunities. The Panthers routed Ramstein 6-1 on March 23 and blanked Kaiserslautern 4-0 on May 4.

What remains, then, is to face off with each other Saturday. It’s not quite the main event of this DODEA-Europe girls soccer season, but it’s not that far removed either.

“In order to be the best, we have to beat the best. I respect Stuttgart’s program,” Angel said. “They have a great team and always come ready to play.”