U.S. soccer team at Ramstein as match with Italy draws near 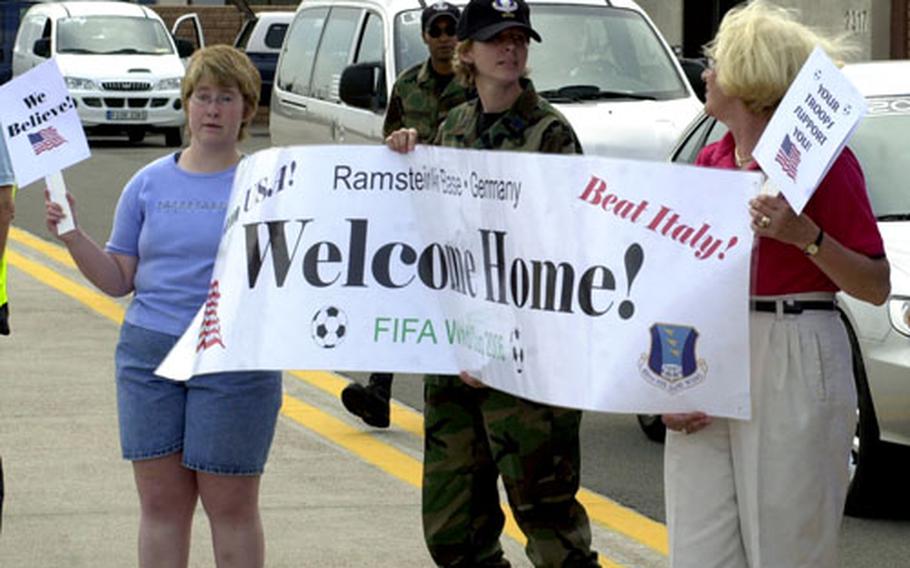 Fans greet the U.S. men&#39;s soccer team Thursday evening at Ramstein Air Base, Germany. The American team, which is staying on Ramstein, plays Italy Saturday at 9 p.m. in nearby Kaiserslautern. (Steve Mraz / S&S) 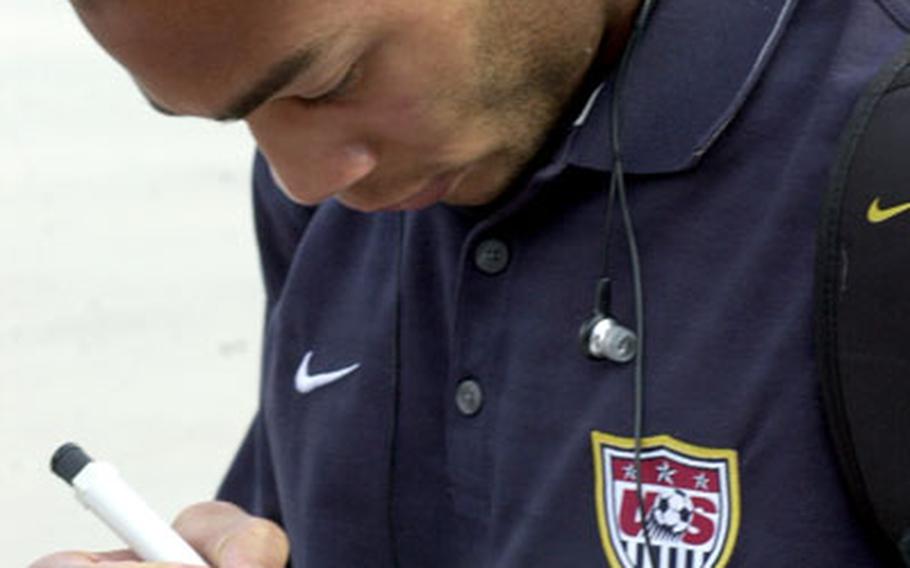 RAMSTEIN AIR BASE, Germany &#8212; The U.S. soccer team arrived at Ramstein Air Base on Thursday as it looks to get its first victory of the 2006 World Cup on Saturday against Italy in Kaiserslautern.

The squad landed at Ramstein around 6 p.m. and then was driven past Donnelly Park and greeted by cheering and flag-waving Americans .

The team will be housed on base in preparation for Saturday&#8217;s 9 p.m. game against Italy at Fritz-Walter Stadiumin Kaiserslautern, the smallest World Cup venue with few hotels.

The U.S. stayed four days at Ramstein before a friendly against Poland in March.

It was a matter of convenience and security that prompted the U.S. team to request an exemption from staying at a FIFA-recommended hotel just a few blocks from the stadium.

Staying on the air base will be a good experience for the team, said Jeff Burt, whose wife is a senior airman at Ramstein Air Base.

To make matters worse, the U.S. has a formidable foe Saturday in Italy. The Italians bested Ghana 2-0 on Monday in a fast-paced match.

Of the five World Cup games to take place in Kaiserslautern, Saturday&#8217;s game will have the largest police presence, said Bernd Riffel, a press officer with the Kaiserslautern police headquarters. When asked how many police officers would be downtown, Riffel said he was not allowed to release that information.

So far, the World Cup in Kaiserslautern has been very peaceful, and fans have behaved well, Riffel said. Some pickpocketing occurred along the World Cup Mile, a section of downtown reserved for pedestrians with World Cup festivities.

For those without tickets, public viewing areas with huge screens have been set up downtown. Bongiovio, a Bon Jovi cover band, will perform Saturday in Kaiserslautern&#8217;s Stiftsplatz after the game, from 11 p.m. to 1 a.m.

If you want to go downtown Saturday, officials advise taking a train or using one of the several park-and-ride facilities set up around Kaiserslautern. A free shuttle from Ramstein&#8217;s base exchange parking lot will be available for transportation to and from downtown Saturday evening beginning at 5:30 p.m. and stopping at 1 a.m.

Also, Pulaski Park on Kaiserslautern&#8217;s Pulaski Barracks will have a World Cup Fest on Saturday, starting at 1 p.m., for ID cardholders. A shuttle to the family-friendly event will be available from Sembach, Ramstein, Kleber and Landstuhl. Five bands are slated to play, and the U.S./Italy game will be shown live on a 400-square-foot JumboTron screen.

Burt plans to watch the game at Pulaski Park. With a 7-month-old, Burt figures that the Pulaski event will be less hectic and safer for children than heading downtown.

Asked for his prediction on who would win Saturday&#8217;s game, Burt replied matter-of-factly.