Ryan Boatright of the U.S., left, gets ready for a no-look pass to a teammate around Australia’s Lewis Thomas. Australia defeated the U.S. 79-66 in the Albert Schweitzer International Youth Basketball Tournament on Thursday night in Mannheim, Germany. Boatright led all scorers with 27 points. (Michael Abrams/S&S)

Ryan Boatright of the U.S., left, gets ready for a no-look pass to a teammate around Australia’s Lewis Thomas. Australia defeated the U.S. 79-66 in the Albert Schweitzer International Youth Basketball Tournament on Thursday night in Mannheim, Germany. Boatright led all scorers with 27 points. (Michael Abrams/S&S) 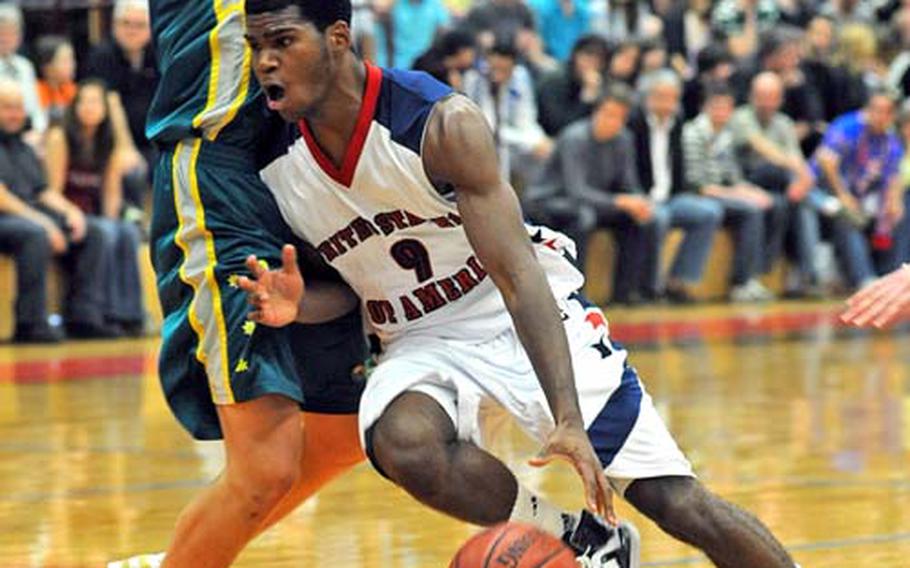 See an earlier version of this story here.

MANNHEIM, Germany &#8212; Anyone looking for a bit of an edge when filling out NCAA basketball tournament brackets a couple of years from now could do some early scouting at the Benjamin Franklin Village Sports Arena Saturday afternoon.

Future Kansas Jayhawk Royce Wooldrige of Phoenix, future Tennessee Volunteer Kevin Ware of Greenville, S.C., and their U.S. Albert Schweitzer squad teammates, most of whom also are bound for NCAA Division I ball, will be putting their skills on display one more time, either in the third-place game at 2 p.m. or the title game at 4 p.m.

Either game is going to be a challenge.

Two German national teams, the country&#8217;s Under-17 and Under-18 squads, were playing in Friday&#8217;s semifinals, where the 17s were to face Australia and the 18-year-olds, undefeated in the tournament, were to take on the U.S. in a game that was to tip off after this edition of Stars and Stripes went to press Friday evening.

The Americans, who reached the game despite a 79-66 loss to Australia on Thursday night, went into their semifinal against the team that defeated them 76-66 in overtime in an April 1 exhibition game with a chance to see how far they&#8217;ve progressed in the eight days since.

"We&#8217;ve come full circle," U.S. coach Larry Krystkowiak said after his team was outworked at the end of each half by the Australians. "We played them in our first game and now we face them again."

Whatever the outcome for the U.S. in the semifinals, by making the final four the Americans ensured themselves of at least matching their fourth-place finish here in 2008. The Americans have won this event a record 10 of the 25 times it&#8217;s been played, but the last title came in 1996. The improved play of the junior national teams from other countries the pick-up squad of Americans must face has kept them out of the title game since.

Australia scrambled at top speed to outscore the Americans by 13 points, outrebound them by 14 &#8212; by seven on the offensive glass &#8212; and hand out 18 assists to just five for the U.S. squad,.

The attitude and effort paid off against the Americans, whom Krystkowiak said suffered from their newness to one another and his system.

"Look what happened when we got a stop, in transition," he said. "When they&#8217;re looking to me for the play, the other team ends up taking the ball out of the net."

The last streak fell just short of knocking the U.S. out of the final four. Had the Aussies won by 14 points or more, Spain would have taken the Americans&#8217; place in the semis under the event&#8217;s complicated tiebreaker rules.