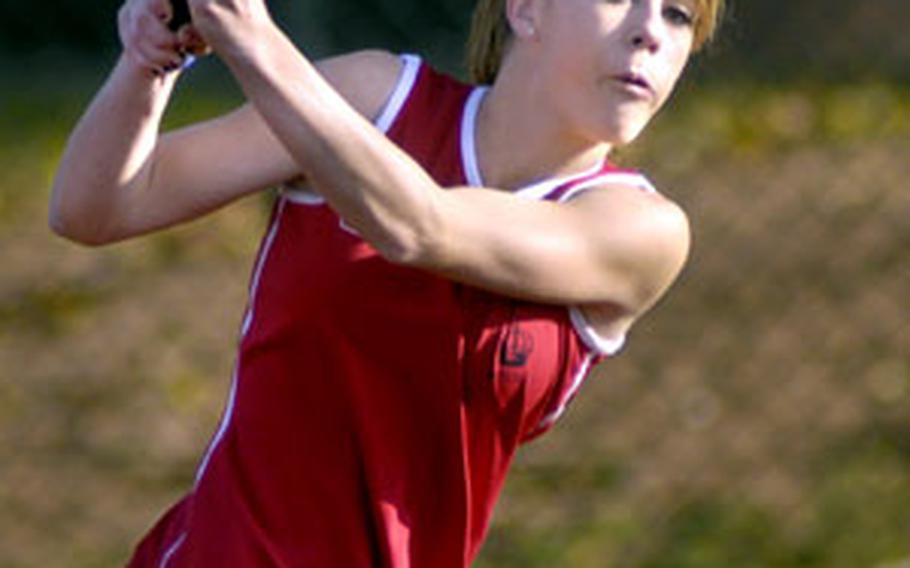 RAMSTEIN, Germany &#8212; Junior Sean Stokstad and sophomore Lindsey Jones, the No. 1 singles players for the Ramstein tennis teams, won their weekend matches to lead the unbeaten Royals (4-0) to 8-1 victories over Lakenheath.

Last season, Stokstad and Jones helped Ramstein to a second-place finish in the European Championships. Stokstad finished third in boys singles while Jones was half of the first-place girls doubles team.

Stokstad believes Ramstein has the players to improve on last year&#8217;s finish in the Europeans. &#8220;We have a stronger team this season versus last,&#8221; he said.

&#8220;Sean could at least make it to the (singles) championship match this time,&#8221; she predicted. Jones will also be playing singles, something Jones said is a bit tougher for her.

But she is getting help. Stockstad and Jones have been a couple for about a year and the two often play for fun away from practice.

&#8220;He definitely is making me a better player,&#8221; Jones said of hitting against Stokstad.

Lakenheath head coach Darryl Brock said despite the two losses, he ranks his current squad the best in five years. The boys team is 6-3, while the girls are 5-4.

Lakenheath had to battle both the Royals and a long bus trip from England &#8212; something it will be facing twice more this season when it travels to Wiesbaden and Kaiserslautern.

And the Lancers&#8217; remaining Division I home match won&#8217;t be any easier: They face defending division champ Heidelberg.

As for Ramstein, Pristelski said her team has played great so far, but that the season will get progressively harder. Heidelberg, led by the Nick Garcia, the defending singles champ, is the final match.