Top seeds vie for right to play in finals 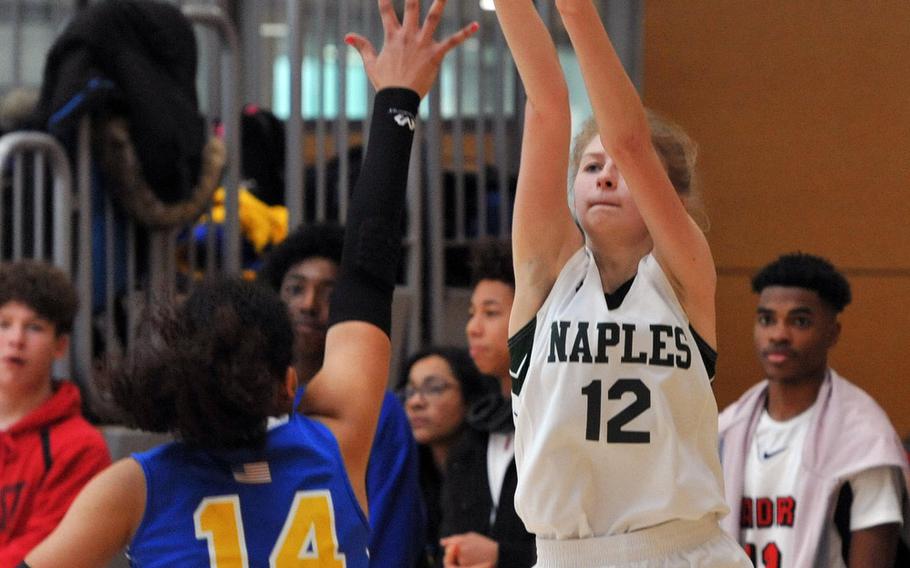 Naples' Roxanne Sasse shoots a three-pointer over Wiesbaden's Amani Robinson in the Wildcats' 36-14 win over the Warriors in a Division I game at the DODEA-Europe basketball championships in Wiesbaden, Germany. (MICHAEL ABRAMS/STARS AND STRIPES)

Naples' Roxanne Sasse shoots a three-pointer over Wiesbaden's Amani Robinson in the Wildcats' 36-14 win over the Warriors in a Division I game at the DODEA-Europe basketball championships in Wiesbaden, Germany. (MICHAEL ABRAMS/STARS AND STRIPES) Kaiserslautern's Mikaila Bell shoots over Ramstein's Shemilia Johnson in a Division I game at the DODEA-Europe basketball championships in Wiesbaden, Germany. Ramstein won the game 33-24. (MICHAEL ABRAMS/STARS AND STRIPES) 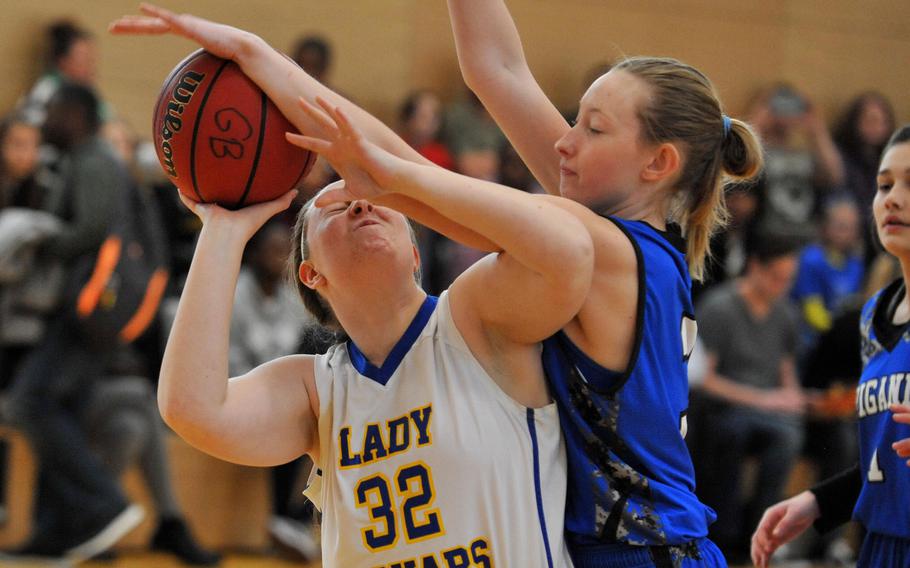 Brussels' Illana Lybarger puts the pressure on Sigonella's Kylee Fall in a Division II game at the DODEA-Europe basketball championships in Wiesbaden, Germany. Despite Lybarger's efforts Sigonella went on to win 31-15. (MICHAEL ABRAMS/STARS AND STRIPES) 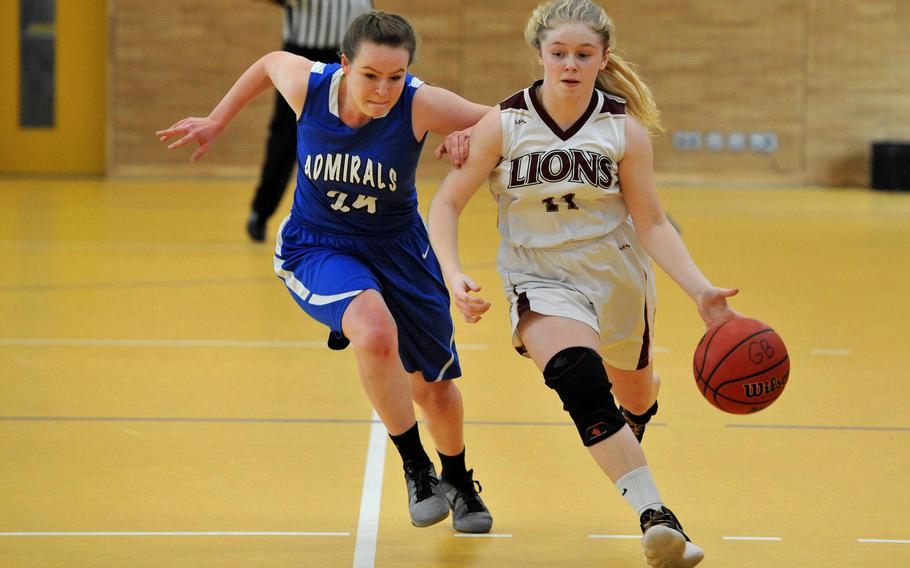 AFNORTH's Victoria Morris drives up the court against Rota's Nina Furner in a Division II game at the DODEA-Europe basketball championships in Wiesbaden, Germany. AFNORTH won 30-18. (MICHAEL ABRAMS/STARS AND STRIPES) 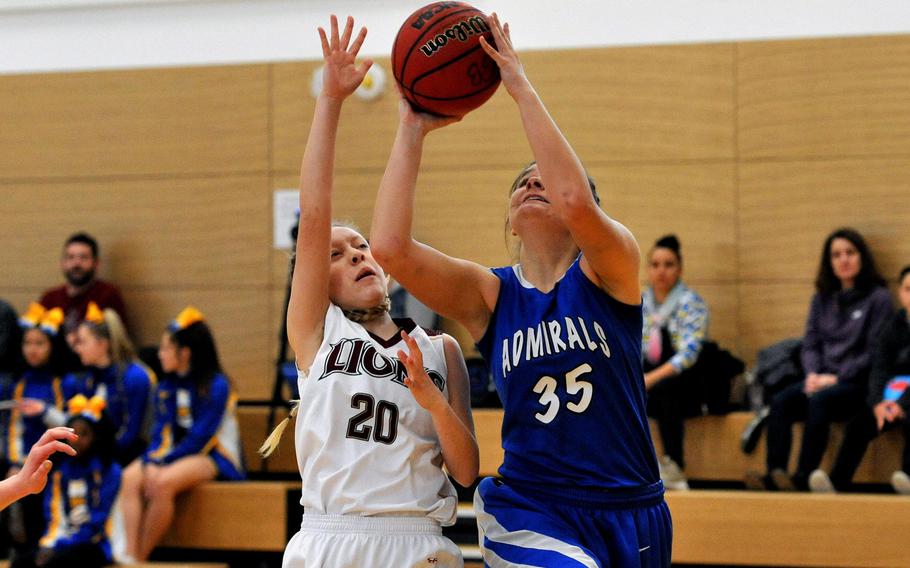 AFNORTH's Stephanie Freudner defends against Rota's Austin Demeritt in a Division II game at the DODEA-Europe basketball championships in Wiesbaden, Germany. The Lions beat the Admirals 30-18. (MICHAEL ABRAMS/STARS AND STRIPES) AOSR's Amaya Vaquerizo shoots over Marymount's Anna Aboltina in a Division II game at the DODEA-Europe basketball championships in Wiesbaden, Germany. AOSR won 28-16 in a matchup of teams from Rome. (MICHAEL ABRAMS/STARS AND STRIPES)

WIESBADEN, Germany – Those looking for big surprises were in for disappointment on the second day of the DODEA-Europe girls basketball championships.

Division IRoyals win twice: Ramstein faced off against SHAPE during its first game of the day, and then against Kaiserslautern.

The Spartans, needing a victory to have any chance of reaching the semifinals, started off strongly.

That seemed to wake up Ramstein and Alexis Tri started piling up points. She scored eight points as the Royals surged ahead.

“The game felt kind of dead at first, but once we started moving and getting our shots in, we really picked ourselves up and the pace,” Tri said. “At first, we didn’t even understand what defense SHAPE was running, so we had to adjust our offense to that when we figured it out.”

Ramstein expanded its lead as the game went on, clinching a spot in Friday’s semifinals.

In their next game against Kaiserslautern – a 33-24 victory - the Royals were not able to really pin down a strong lead until the third quarter.

Kaiserslautern 33, Lakenheath 26: During their first game of the day, the Raiders faced off against Lakenheath.

At the start, Kaiserslautern’s players were fast but unfocused. They had the speed, but their shots weren’t hitting the mark.

Emajane Hawkins was a consistent factor as she used her agility to attack the hoop and pull down quick rebounds and put them back up for points. She scored 10 points, but was almost neutralized by the Lancers’ Seraphina Raas, who scored eight points as the teams stayed close.

Lakenheath, like SHAPE fighting to stay alive in the tournament, entered the fourth quarter with a 21-20 lead.

Mikaila Bell scored six points – half her team’s points in the fourth - as the Raiders persevered.

“We changed our offense and defense after they started to score more,” Hawkins said. “They started taking more jump shots, so we started putting more pressure on them.”

Naples 36, Wiesbaden 14: The Wildcats clinched the final semifinal spot with a late victory over the Warriors.

Naples came out of the gate focused. The Wildcats used their mobility to get around Wiesbaden’s taller defenders to score from close range.

Mia Rawlins scored 11 of her team’s 22 points in the first half.

“This game was a must-win for us,” Smith said. “We went through two tough games yesterday, one we won and one we lost, so we had to come and attack and start scoring right off.”

Naples used Wiesbaden’s defensive strategy against them, Smith said. They drew the defenders out of the key and used the openings to get in and score.

“The thing that we improved upon the most this game was scoring baskets on the inside and playing the short game,” Smith said.

Division IIBahrain 32, Black Forest 30: As the three-time defending Division II champions and a seemingly permanent fixture on the European title scene, the BFA Falcons have every reason to believe in themselves as they attempt to further their dynasty. But they also know that confidence can escalate into hubris if left unchecked.

BFA standout Jessie Campbell defined the Falcons’ understanding of where that line exists. The senior explained the approach the team is careful to avoid: “We’re going to just automatically make it to the championship, because that’s what it’s been for the last three years;” and the one it has adopted: “We have this, we know what our team can do.”

The ideal result, Campbell said, is a champion that plays with “respect for every team” and knows no title can be assumed until it is won.

“The tournament is always the highlight of our year, highlight of our season. It’s what we’re working for,” Campbell said. “That’s what our end goal is, to come here and play our hardest and do our best.”

BFA took a rare tournament defeat in its final preliminary game, though its 37-23 win over Florence and 32-17 defeat of Aviano on Wednesday left it in comfortable position to advance even before its loss to fifth-seeded Bahrain. Both Bahrain and BFA advanced by virtue of Bahrain’s late 26-22 defeat of Florence.

American Overseas School of Rome 28, Marymount 16: A battle between Roman neighbors sent the third-seeded Falcons into the semifinals for the third time in four seasons.

AOSR is looking for a title-game breakthrough after reaching the semifinals in 2016 and 2017. Marymount supplanted AOSR in last year’s semifinal round.

Second-seeded AFNORTH beat sixth-seeded Rota 30-18 on Thursday to take its place in the semifinal round, where the Lions will face Black Forest. AOSR will face Bahrain in the opposite semifinal.

Division IIIAlconbury 17, Baumholder 14: “Survive and advance” is the motto of every championship hopeful in a tournament, suggesting that any win that prolongs one’s season is a worthy one. But the on-court process is not so straightforward.

The second-seeded Dragons fought off considerable frustration Thursday as they nudged the stubborn sixth-seeded Bucs into elimination. Alconbury’s shots weren’t falling nearly as readily as they had in its 45-29 defeat of Hohenfels on Wednesday, requiring the Dragons to blaze a grittier path into the semifinals.

“Obviously we’re not used to such low-scoring games,” Alconbury senior Kira Thorne said, admitting that the team grew “a little frustrated” as it failed to keep the scoreboard moving. “We just kept our heads up and just hustled.”

But such lulls aren’t unexpected over the course of a tournament. And while the reality of the “survive and advance” ethos is more nuanced than the simple phrase suggests, the Dragons are indeed surviving and advancing.

“We knew that we had to just take it as it comes,” Thorne said.

Sigonella 31, Brussels 15: As with many pool-play meetings Thursday, this clash between the top-seeded reigning champion Jaguars and fifth-seeded Brigands was robbed of most of its import when both teams clinched semifinal berths on Wednesday.

Sigonella’s semifinal with Alconbury is a rematch of one of the more competitive games of the Jaguars’ 3-0 divisional season. The defending champs beat the Dragons 31-29 on Jan. 18.