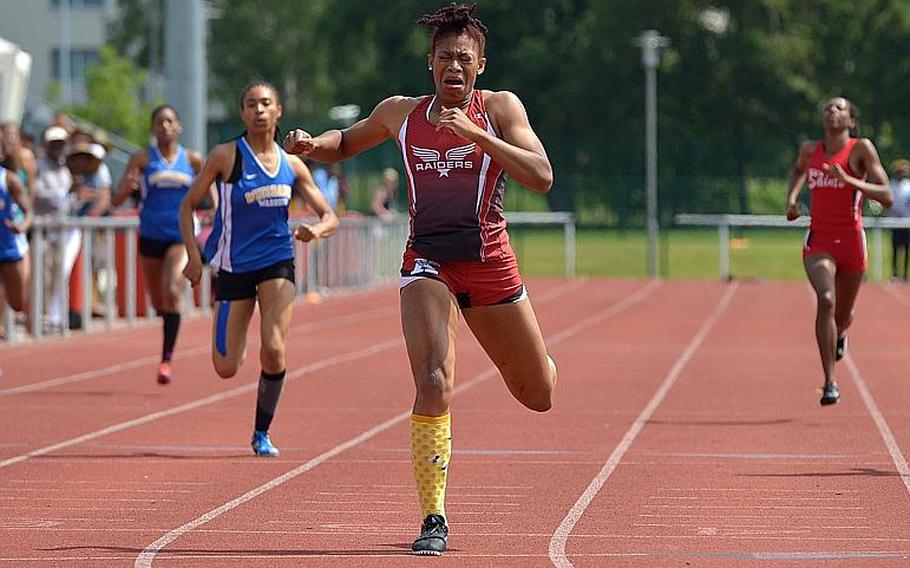 Jada Branch reacts after setting a new DODEA-Europe record in the 400-meter race at the European championships. She finished in 57.28 seconds, breaking the record set in 2000 by Christina McDuffie of Hohenfels. (MICHAEL ABRAMS/STARS AND STRIPES)

At the Raiders’ season opener at Wiesbaden on April 14, Branch pulled a hamstring that took about three weeks to heal.

But the injury hardly slowed her down.

Branch recovered in time to set two records at the DODEA-Europe 2018 Track and Field Championships in the triple jump and 400 meters. Her performance capped off a remarkable four-year high school track and field career, one in which she set multiple European and school records and dominated her signature events, the triple and long jumps.

Branch is the 2018 Stars and Stripes girls track and field Athlete of the Year.

In the triple jump, Branch soared 39 feet, 6 inches, to break her own European record, set a year ago at the championship meet.

Her biggest challenge and accomplishment, perhaps - one indicative of her up-and-down season - was bouncing back in the 400.

In the preliminaries, Branch stumbled near the finish line, nearly passing out in the withering heat, falling to third after commanding a lead.

She roared back the next day to hold off Vilseck’s Tynniesia Wilson, running a 57.28 to top the record that eluded her last year by two tenths of a second.

“I was encouraging myself throughout the race in my head,” Branch said. “Coming down that home stretch, I had to remind myself that, ‘Hey, this is where you were at (in preliminaries) … you stumbled a bit, so let’s push through that, shake off the nervous energy.’”

For Branch, 18, nerves are part of the game.

“Oh, it doesn’t matter where I’m at,” she said. “I don’t even care if it’s like a guaranteed win, I’m nervous. Sometimes, I feel like I’m going to cry and throw up.”

But Branch can battle through those nerves. Kaiserslautern track and field coach Jason Steadman said Branch “is a mentally tough athlete.”

“A lot of the theory behind the sport goes into everything she does on the track,” he said. “She can immediately dissect exactly what she could have done better at the end of a race, and a lot of times, it takes the words right out of my mouth.”

Steadman said Branch is meticulous with her training, yet also takes time to mentor athletes around her.

“Her confidence catches on like wildfire and motivates everyone around her,” he said.

In addition to the two European records she holds, Branch is the record holder in five different events at Kaiserslautern: 300 hurdles, 200, 400, triple jump and long jump, Steadman said.

Heading into the summer, Branch has her sights focused on one more big competition before entering the college ranks. She’s competing in the youth Down Under Games next month in Australia, where she’ll represent North Carolina, the home state of her summer track club.

This fall, Branch will attend Louisiana Tech University. She received a full-ride track and field scholarship to the Division I school.

She was recruited, she said, primarily for the jumps, but she said she might race in some of the sprints.

Steadman said Branch stepped up for the team earlier this season when the Raiders were missing their anchor for the 3,200 relay team. On the same day as prom, she helped the team qualify for Europeans. Steadman said he clocked her in less than 2:10, including the first lap in 60 seconds.

For now, her goal is to “continue to train and just become stronger and better,” she said.

For Branch, the sky is the limit.