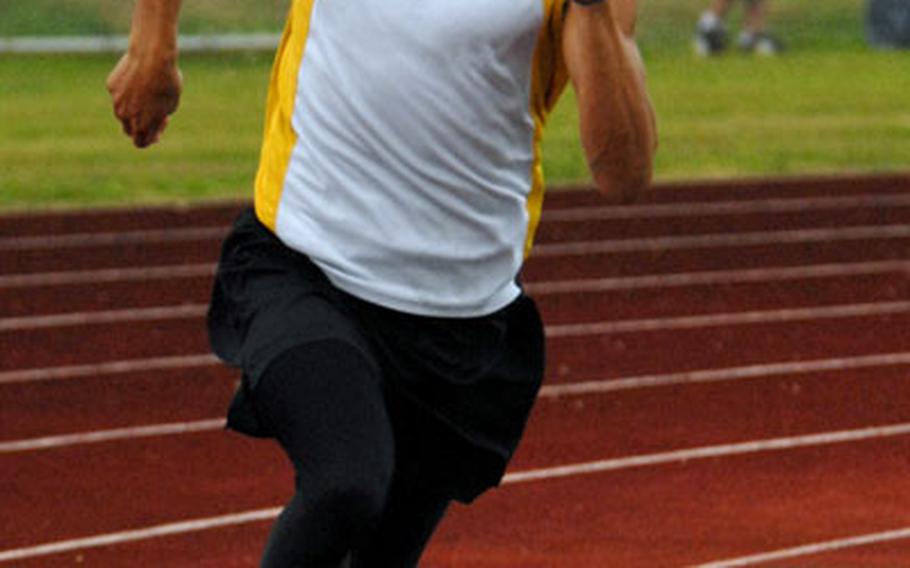 CAMP FOSTER, Okinawa &#8212; Track and field&#8217;s shortest race, run in the quickest time, always seems to garner the lion&#8217;s share of attention. This year on Okinawa, there&#8217;s good reason: the rivalry between Charles Vinson Jr. of Kubasaki and Jeff Morton of Kadena.

Vinson had similar admiration for his competition: &#8220;That&#8217;s just one race. I have to put that behind me. I can&#8217;t afford to get big-headed over it. He [Morton] gives it everything he has. He trains really hard and takes it seriously. It&#8217;s going to be an intense rivalry, perhaps an intense season.&#8221;

It&#8217;s an unlikely pairing, for a variety of reasons, starting with their experience levels.

Morton, a top 10 runner in Colorado before moving to Okinawa before his junior year, went unbeaten, and practically unchallenged, in more than 40 events, individual and relay, last season. Vinson did not run at all last year; his parents, Charles Sr. and Charlena, sidelined the former top 10 middle-school star in northern California&#8217;s Seal Beach District when his algebra grade fell to a C.

Vinson&#8217;s father, a Marine master gunnery sergeant from Montgomery, Ala., who ran on scholarship in the 1970s at Alabama State, is his main training partner &#8212; and motivator to ensure the grades would go up and stay up.

The younger Vinson said he kept working on his grades, but he also kept coming to meets to see who would become his chief rival.

Not being able to run left Vinson&#8217;s confidence somewhat lacking, he said. So he worked in the offseason, twice or more a week, with his father, mainly on technique, the elder Vinson said.

Speed is another area where Vinson and Morton differ, coaches and runners say. Vinson tends to explode out of the blocks, while Morton makes up for slower starts with &#8220;blazing foot speed,&#8221; Burns said.

What about the grades?

With the grades back up and the rivalry established, the question becomes, how low can they go?