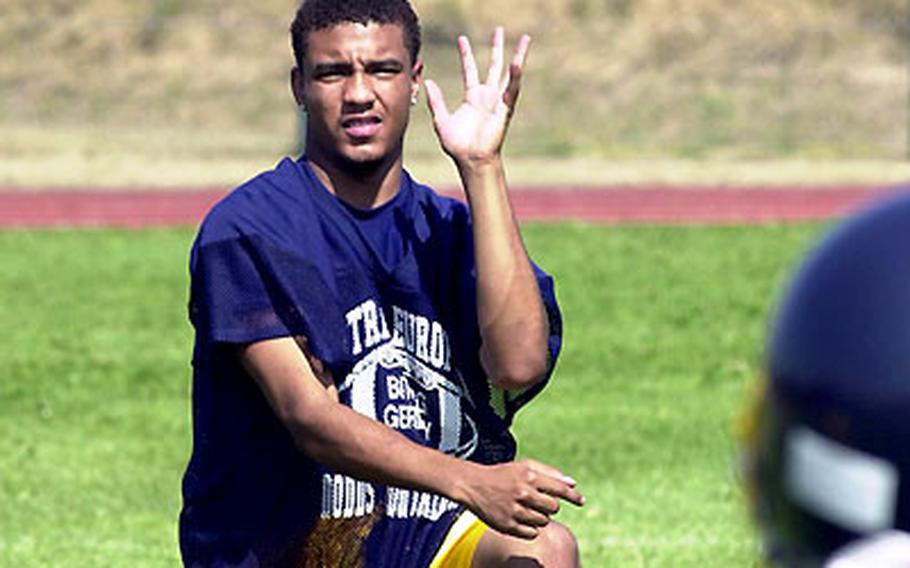 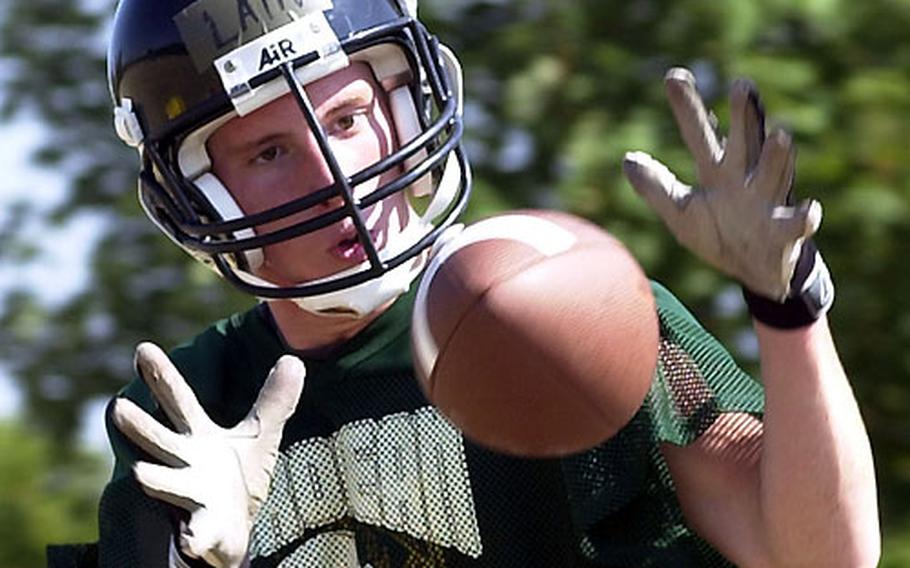 Eric Lain from Vicenza keeps his eye on the ball on a pitchout during a session for running backs. (Michael Abrams / S&S) 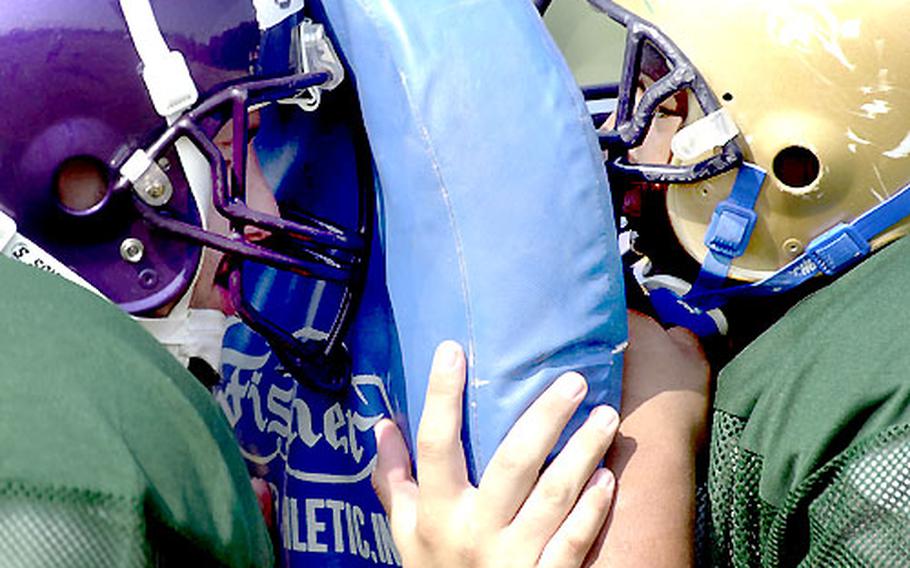 Jeff Bowlan of Mannheim, left, and Greg Surpris of Wiesbaden go through a drill for linemen at the 2003 European Football Camp in Bitburg, Germany. (Michael Abrams / S&S) 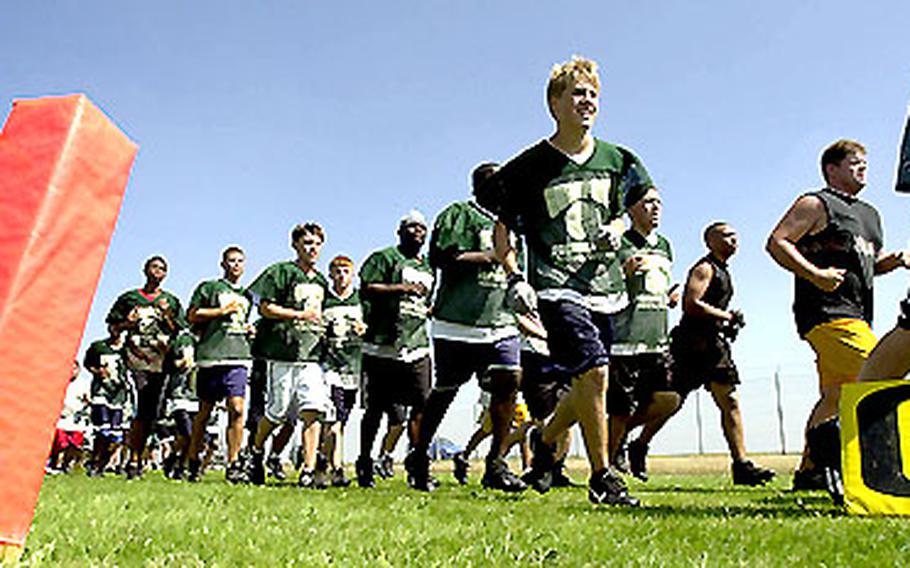 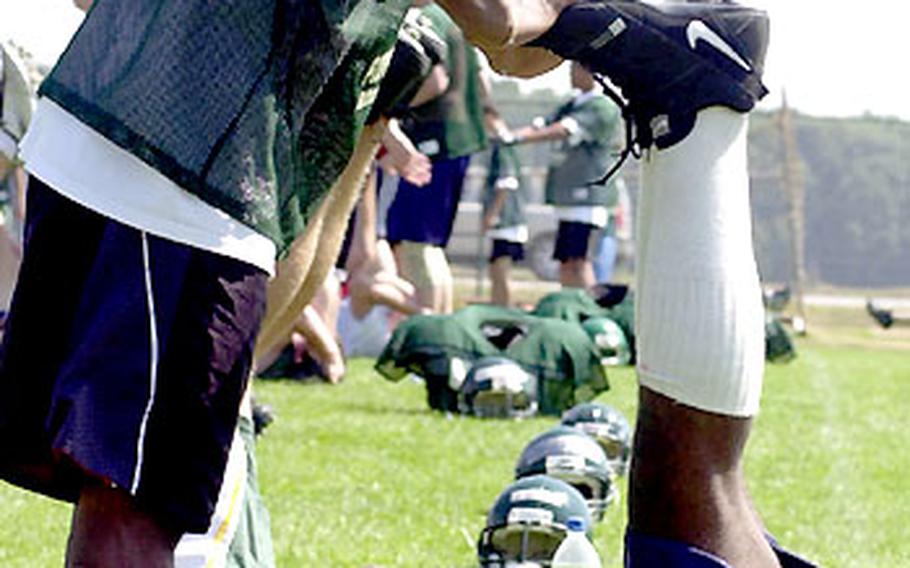 Ryan Butler of AFNORTH, standing, and David Kennedy of Patch go through a warm-up session at the 2003 European Football Camp in Bitburg, Germany. (Michael Abrams / S&S)

As the biggest DODDS-Europe football camp opened Wednesday, some of the focus was on the near 100-degree temperatures.

About 375 high school students turned out for the three-day round of drills and competitions, the largest turnout in the camp&#8217;s 15-year history. Keeping them cool and hydrated is among the biggest concerns of the 26 coaches who volunteered to run the camp.

In addition to water stations, Carr said the Eifel military community provided the camp with a water trailer. Carr told the campers to use the trailer to douse their heads when they feel the heat catching up with them.

&#8220;Get a drink whenever you feel you need to hydrate yourself,&#8221; Carr told the campers at Wednesday morning&#8217;s introductory session at the Bitburg High School football field.

Players filled two sections of bleachers at the field: a sign of the growing awareness by high school football players that the DODDS camp &#8212; with the instruction and conditioning it provides &#8212; is an effective path to better performance on the field.

&#8220;Look at the people around you,&#8221; Carr said after introducing participants who made All-Europe, including running back Ryan Butler of AFNORTH and quarterback Shawn Bachtel and placekicker Garrett Eichhorn of Ansbach. &#8220;Eighty percent of the players who will make all-conference and All-Europe this year are attending this camp.&#8221;

Although the camp drills stress fundamentals, even the most experienced players were eager to get started.

SHAPE quarterback Ryan Rice was working on his mechanics.

Those quarterback-receiver drills will get an added dose of game-type conditions this year.

&#8220;This is a testimony to football,&#8221; George said as he surveyed the sea of green-jerseyed campers and coaches, who all volunteered their time this week. &#8220;No other sport goes to this much effort and has so many people giving up their vacation time to help out.&#8221;

This is the fifth consecutive summer Bitburg has hosted the camp, which breaks up the drills with competitions, such as a 40-yard dash, vertical jump, bench-press, punt-pass-and-kick and ironman.

In all the competitions, backs compete against backs and linemen against linemen.

Carr said the competitions break up the drills and help the players measure themselves.