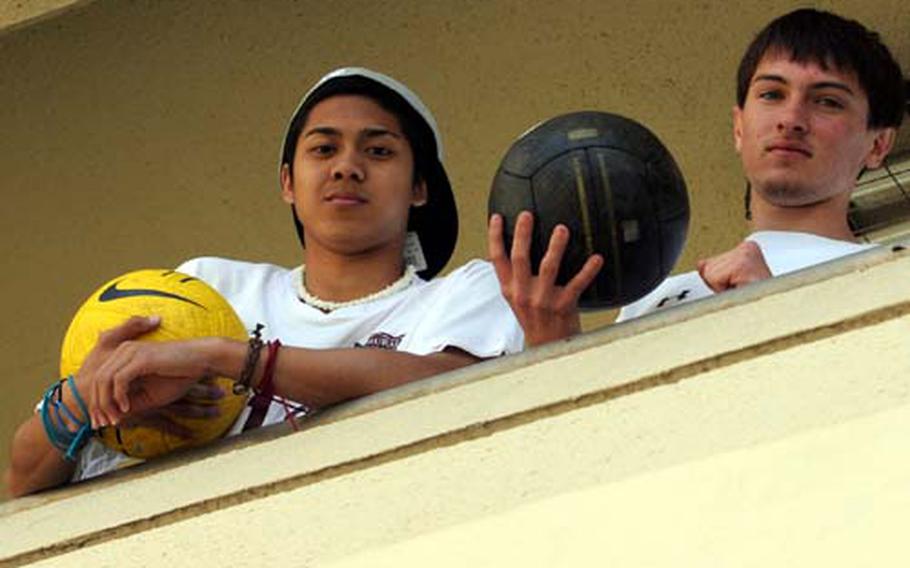 MARINE CORPS AIR STATION IWAKUNI, Japan &#8212; For years, Matthew C. Perry&#8217;s boys soccer team was what seventh-year coach Mark Lange called &#8220;the practice cones for everybody else to run around.&#8221;

At long last, the futbol gods have smiled aplenty on the Samurai.

Lange&#8217;s squad features 14 veterans, his most ever. Add senior striker Andre Bugawan&#8217;s 27 goals, second-best in the region, and Carolina transfer Tyelor Apple (20 goals), and you have a 21-6-2 team threatening to eclipse its entire victory total of the previous six years &#8212; and chase a Far East Class A title on its home pitch.

Occasionally, Perry might get in a talent or two for a couple of seasons, a stellar keeper in Grace Pascual and striker Scooter Lewis in 2000 on the girls side, or an Adam Krievs and Chris Allison in 2004 on the boys side. But the stars never seemed to align for either team.

But in 2007, girls coach Chris Anderson finally got the ingredients to gel, and twice in three years, the Samurai girls reached the Class A Tournament title match.

For the boys, everything began clicking last season, Lange said, during a Futsal tournament at Osaka International School, when the Samurai beat powerhouse Nagoya International.

This season, in matches played 11 per side on full fields, Lange said, his Samurai have played 38 halves and won 33.

Having a move-in such as Apple very much helped solidify an attack that had been feeble, at best, in years past.

Apple, for his part, had not wanted to leave Jacksonville, N.C., but the sophomore got in contact with Lange and after arriving at Iwakuni, said he was sold on soccer when he ran into his soon-to-be teammates.

&#8220;Just having everybody around me, they love the game as much as I do and enjoy playing it and take it seriously,&#8221; Apple said.

Whether all of that is good enough for Perry to hoist the banner on its home turf in two weeks is open to question, Lange said.