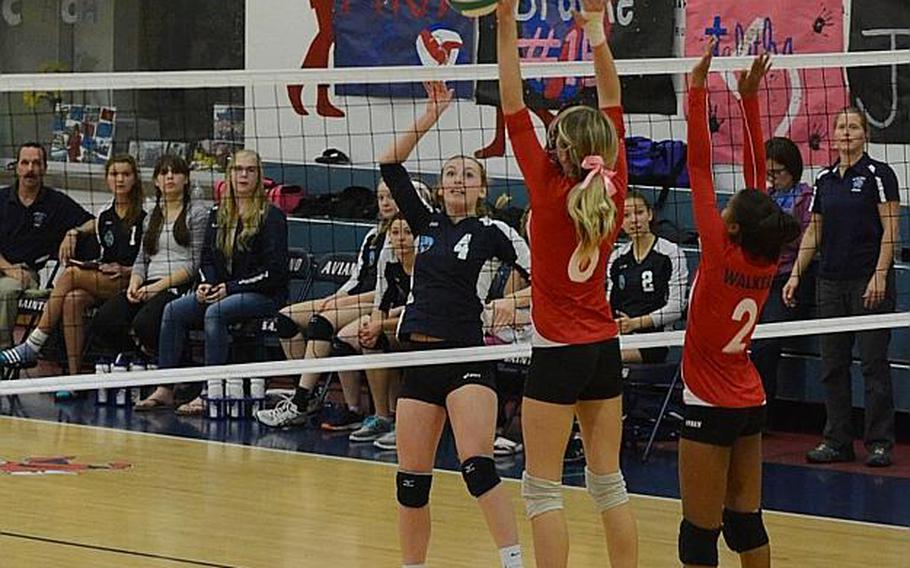 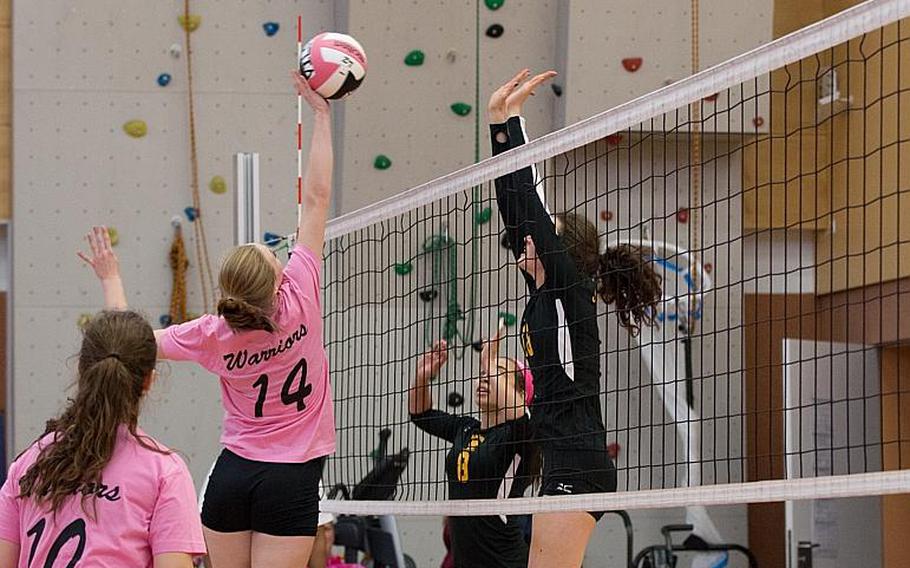 It’s easy to look at the frantic three-day schedule of the annual DODDS-Europe girls volleyball tournament and see challenges. Instead, many coaches see opportunity.

“The regular season is different because there is so much time between games and it’s easier to lose momentum between them,” American Overseas School of Rome coach Lauren Waite said “Tournament play provides the opportunity to hit your stride as a team and continue with the positive momentum.”

That’s the mission for every team assembled in the Kaiserslautern Military Community this week for the 2015 edition of the European volleyball tournament. Preliminary play in all three divisions starts Thursday at Kaiserslautern High School and Ramstein Southside Fitness Center, capped Friday by semifinals in Division I and II and the conclusion of round-robin play in Division III. The championship matches are set for Saturday at Southside.

It’s a long path to Saturday’s finals, and the margin for error can be thin as teams strive to advance through the perilous early rounds.

“We need to get off to a quick start,” Bitburg coach Eric Vining said. “We can’t afford to give away the first game.”

The event’s rigorous schedule, high stakes and consistent pressure make the tournament a unique experience, and a departure from the methodical Saturday-heavy slate teams play during the season.

“Tournament play is exciting and demanding,” Stuttgart coach Michael Rubino said. “Each team is dangerous and has the possibility to upset the next.”

Division I The list of contenders in the most wide-open large-school bracket in years reads like a roll call of suspects in a detective story.

There’s the tenuous defending champion, Wiesbaden. Crowned in a five-set classic over Naples last season, the Warriors have been largely dominant this fall save for a pair of losses to Stuttgart that rendered the reigning champs a humble third seed.

The resurgent runner-up, Naples. The second-seeded Wildcats return for their second shot at the Division I crown with a promising young team led by hard hitters Skylar Evans and Sarah Kemp.

The unpredictable wild card, Vicenza. The returning third-place team has been up and down this fall, ranging from a four-set defeat of rival Naples to a loss to Division III Sigonella.

The aggrieved former dynasty, Ramstein. The Royals won eight of nine championships between 2005 and 2013, including three straight to end that run. But Ramstein was ousted in the semifinals last fall and has played to mixed results this fall, taking losses to Lakenheath, Stuttgart and Wiesbaden en route to the No. 6 seed.

The vengeful forgotten contender, Stuttgart. The Panthers dropped their first match of the season to Ramstein but haven’t lost since, and boast Division I’s most expansive body of work including wins over everyone from local rivals Bitburg, Vilseck and Wiesbaden to distant opponents Lakenheath, Naples and Vicenza. That was good enough to claim the bracket’s top seed; still, the program formerly known as Patch hasn’t seen a final since 2012.

Lurking in the shadows around this group of favorites is a dangerous set of dark horses led by Lakenheath and Vilseck. Kaiserslautern and SHAPE round out the Division I roster.

Division II DODDS-Europe’s middle class features two reigning European championship teams – and the possibility that neither will win another this fall.

Rota will make the long trip from Spain to the KMC to defend the Division II championship it won last year. Among the Admirals’ primary threats is sixth-seeded Florence, which won the 2014 Division III crown before a minor realignment sent the team up a level while dropping Ansbach from Division II to Division III.

Though it played its typical schedule heavy on local competition and light on DODDS-Europe action, Rota has long since transcended the need to prove itself viable. The Admirals this year handled all three of the DODDS-Europe opponents made available to them, including fellow Division II power Bitburg, and enter as the top seed behind libero Emily Quan, setter Talia Pekari and a fleet of heavy hitters.

Rota and Florence, however, will have much more to worry about than each other this week as challenges arise from a strong set of contenders.

No. 2 seed Black Forest Academy has been quietly dominant all fall, handling divisional opponents such as Aviano and Hohenfels while taking its only loss of the season to defending Division I champion Wiesbaden.

Third seed Bitburg has a pair of standout middle hitters in Elise Rasmussen and Allison Lillemon that give the Barons an advantage at the net in nearly every match they play. Bitburg, last year’s third-place finisher, will enter the tournament with considerable momentum after knocking off Division I Ramstein twice over the last two weekends.

Division III DODDS-Europe’s big three of the small-school ranks return to battle for another European title.

Top seed Sigonella is the logical favorite to reclaim the trophy it last won in 2013. The Jaguars are the top returning team in the division after finishing second last year to since-promoted Florence, and they didn’t hurt that status with a strong 8-4 regular season featuring wins over upper-division foes including Vicenza, AOSR and that same Florence squad.

Checking in just below the Jaguars are the twin northern powers of Alconbury and Brussels. The Dragons emerged from Division III’s most challenging schedule hovering respectably around .500, while the Brigands matched Sigonella’s 8-4 mark. But Alconbury took the teams’ lone regular-season meeting in four sets, earning it the No. 2 seed to the Brigands’ No. 3.

Ansbach, Ankara, Baumholder and Incirlik comprise the rest of the seven-team small-school field.

Boys The Mediterranean boys volleyball championship plays out Friday and Saturday at Aviano with the same competitive 10-team field as a year ago. The host Saints are one of six Italian teams in the mix, while Bahrain and Turkish programs Ankara and Incirlik make the trip westward and Black Forest Academy travels south as Germany’s lone entry.

AOSR is the three-time defending champion coming off an undefeated 2014 season and a three-set sweep of Sigonella in last year’s championship match. But the Falcons’ dominance has slipped this fall as they managed a 6-6 record on the regular season. That slots them third behind 12-2 Naples and 7-3 Marymount.