Teams get a chance to see new foes, styles at ASIJ tourney 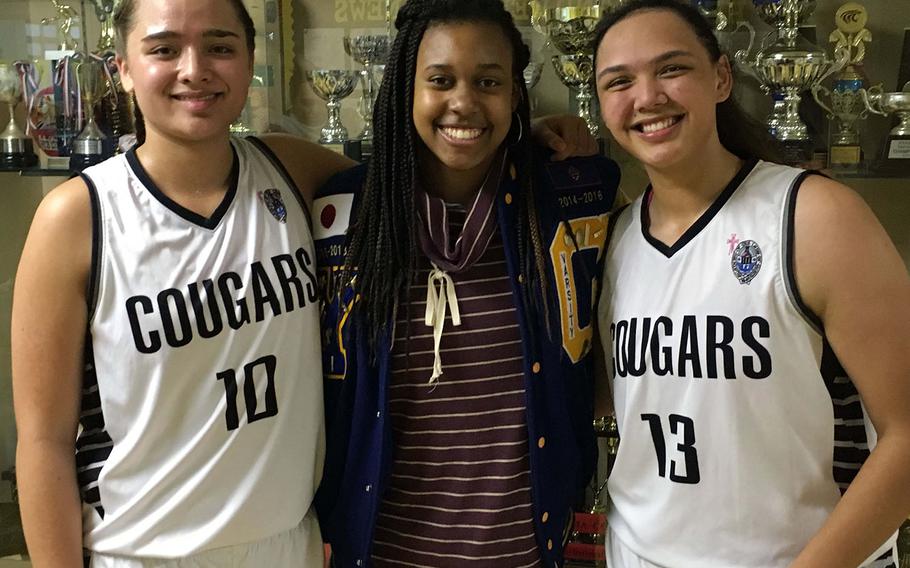 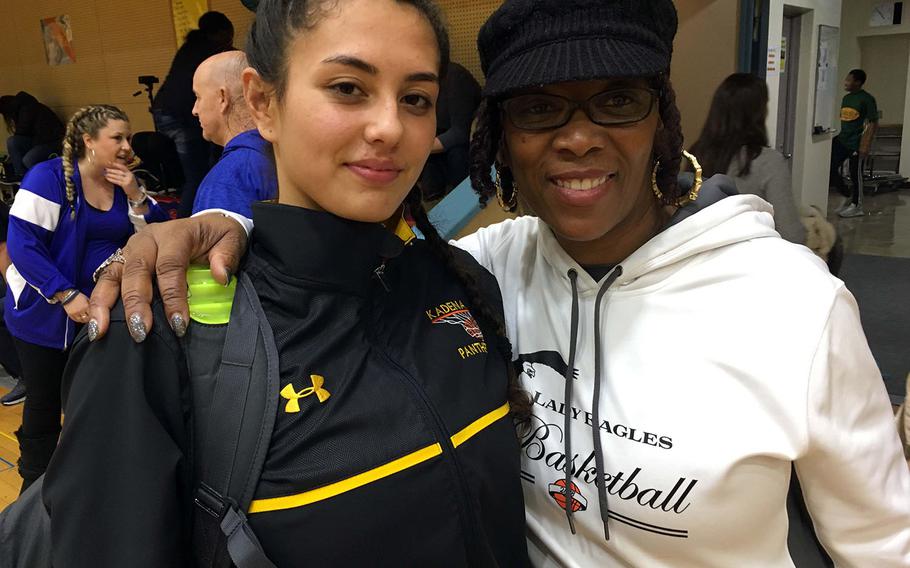 The 2nd Kanto Classic Basketball Tournament saw its share of reunions on Day 1 of pool play, to include Kadena's Isabel Tayag sharing some time with her former Robert D. Edgren coach Sarah Richardson. Tayag played for the Eagles in her freshman and sophomore seasons before transferring to Kadena in summer 2016. (Maiya Larry/Special to Stripes) Yokota's Jimmy Dewberry hit the game-winning shot with four seconds left to give the Panthers an upset 41-39 win in an interdivision matchup with Kadena on Day 1 of the 2nd American School In Japan Kanto Classic Basketball Tournament. (Maiya Larry/Special to Stripes) 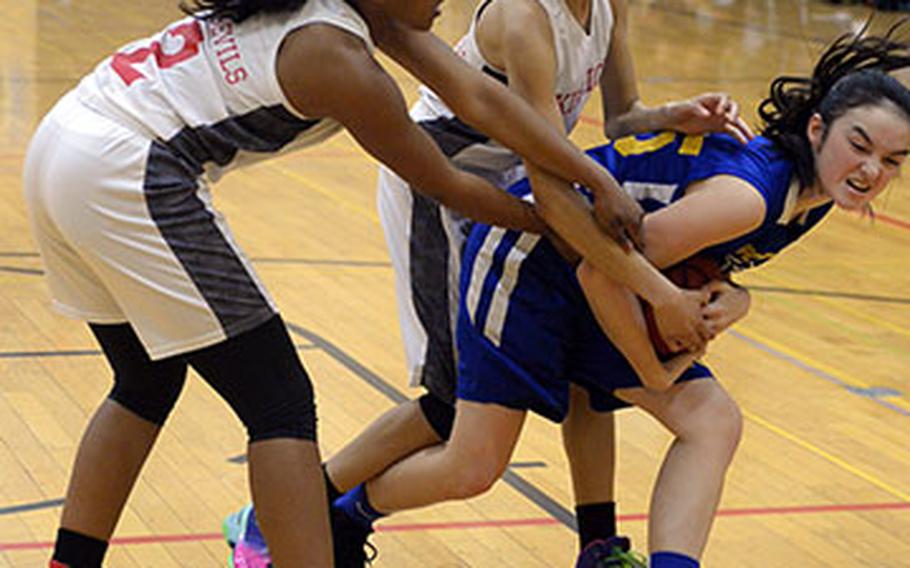 TOKYO – Dan Galvin looked visibly relieved as the final buzzer sounded on Yokota’s 41-39 inter-division win over Kadena. His Panthers trailed Kadena by 12 points entering the final period and needed nothing short of a miracle – which they got – to win.

Jimmy Dewberry sank a shot from the lane with four seconds left, capping a rally in which Yokota outscored Kadena 16-2 in the final period. Montez Young Jr.’s 12 points helped give Kadena a 37-25 lead after three quarters.

It’s tight games such as these, in this weekend’s 2nd American School In Japan Kanto Classic, that will help Yokota during the season’s home stretch, Galvin said, in the hope of regaining the Far East Division II Tournament title it lost last year after winning in 2015 and 2016.

“We have been winning by 20 or losing by 20 most games,” Galvin said. “This helps us down the road, playing under pressure. We could have faded. Instead of giving up, they dug down a little deeper.”

The three-day ASIJ Kanto Classic began Thursday with the first of two pool play days of play. And in the 20 games played on the first day, the tournament saw several close shaves:

-- American School of Doha, Qatar, in its first appearance in a Pacific Rim tournament, outlasted St. Mary’s 26-24 in a defensive boys battle, then got a basket by Rayan Al-Amine with seven seconds left to edge Zama 41-39.

-- Trinity Fier sank a layup as the buzzer sounded, giving Robert D. Edgren’s girls the first of their two victories, 30-29 over the host Mustangs.

-- Another first-time tournament entrant, Academy of Our Lady of Guam, escaped with two four-point victories thanks to unanimous all-island MVP Mia San Nicolas. She had a combined 44 points in the Cougars’ 41-37 win over Kadena and 32-28 over Christian Academy Japan.

Besides close finishes, the tournament has also seen its share of reunions, among them Kadena senior forward Isabel Tayag sharing a hug and some memories with her Edgren coach Sarah Richardson. Tayag transferred to Kadena after her sophomore year, 2015-16.

“I’ve been watching them play; they look good,” said Tayag of her old team, the Eagles, who finished the first day 2-0.

“It’s hard to see her in that uniform color (black and yellow),” Richardson said of Tayag’s Kadena basketball togs compared to Edgren’s green and gold. “But it’s good to see her playing well.”

Yokota’s Britney Bailey got a chance to see a pair of old rivals from Academy of Our Lady, juniors San Nicolas and Meaghan “Mink” Cruz, who battled against Bailey when she was with Guam High. Bailey transferred to Yokota in October 2016.

She’ll get that chance on Friday at 4:40 p.m., when Yokota meets the Cougars with first place in Pool B on the line.

Steve LoBianco used to coach the Mustangs and led them to the Far East Division I title in 2014 before transferring to Qatar. His assistant coach, Craig Karnitz, also coached at ASIJ and followed LoBianco to Qatar a year later.

“It’s a blast,” LoBianco said of returning to Mustang Valley. “I don’t know any of the kids any more, but some of the coaches, the refs and the staff. My children were born here; Japan is in many respects my home.”

Pool play continues through Friday, with the single-elimination round with consolation slated for Saturday. The girls championship game is at 6:30 p.m. and the boys at 8 p.m., each at ASIJ’s high school gym.

Among other events around the Pacific, the final tune-ups for Japan teams for Far East wrestling scheduled for Feb. 1-3 at Kinnick take place on Saturday, while Korea’s teams hold their next-to-last event.