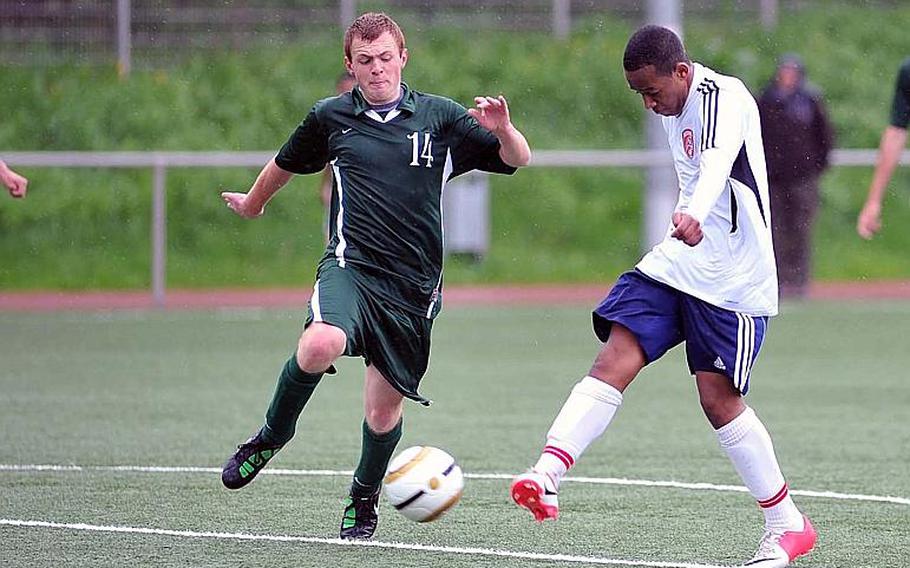 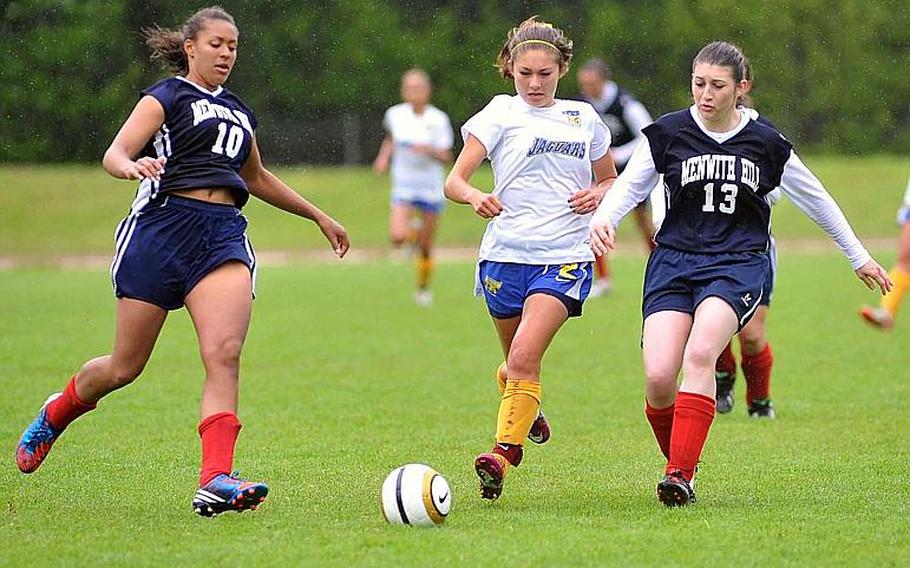 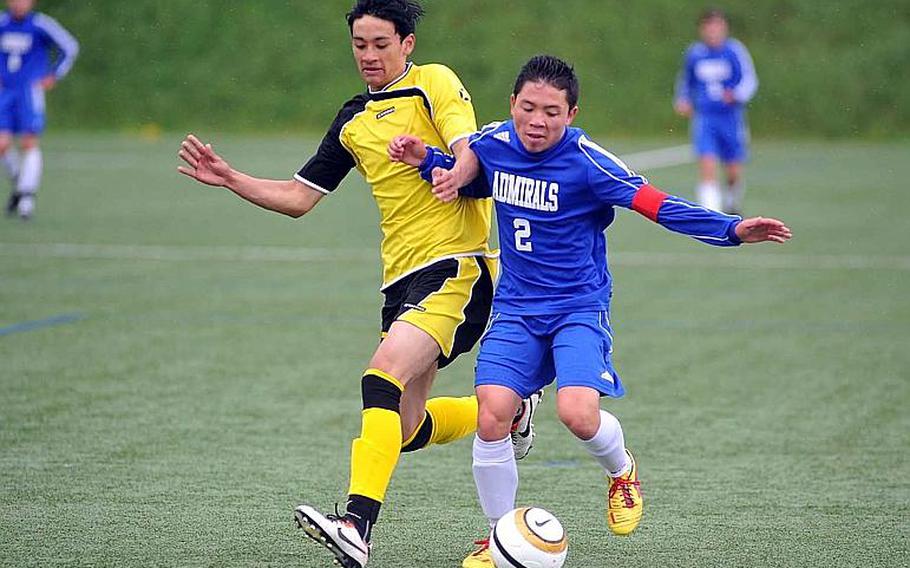 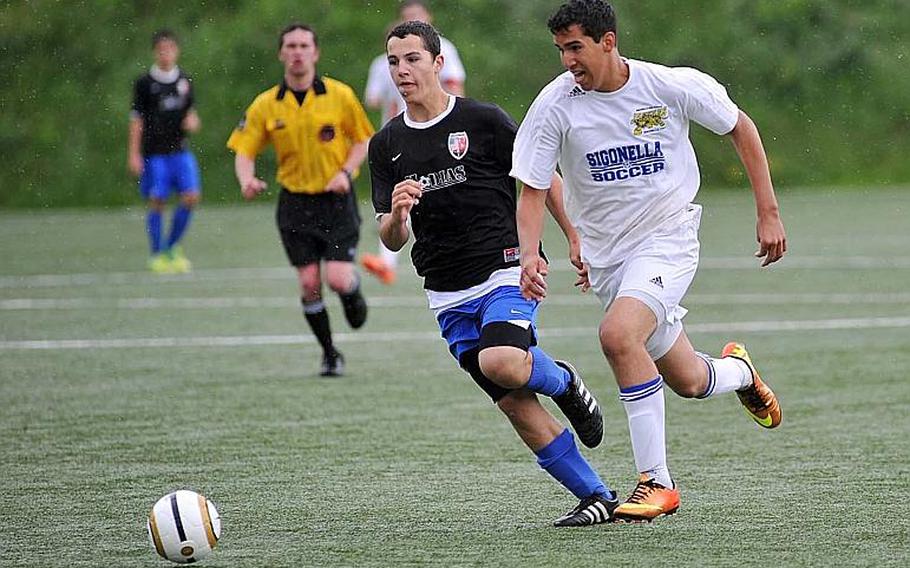 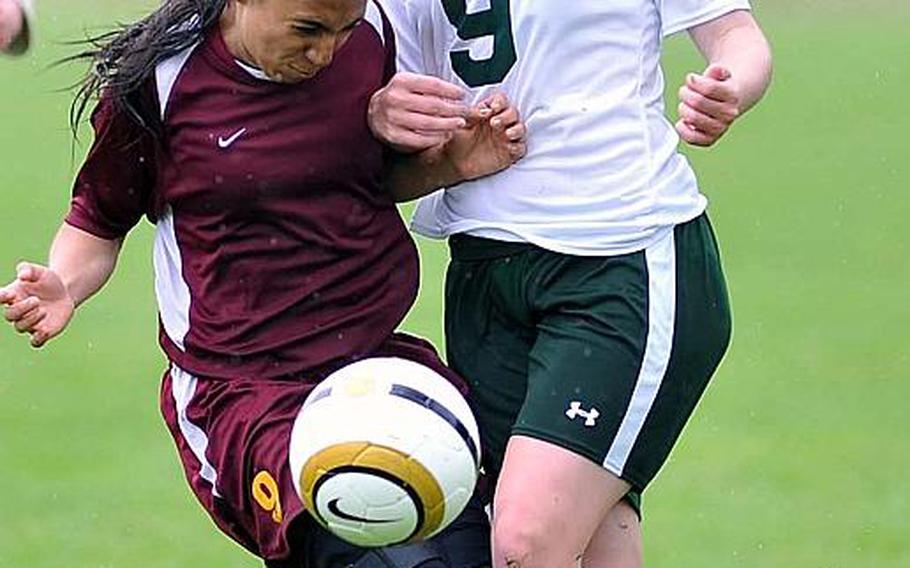 The incessant rain didn’t dampen the action, however, as Europe’s smallest schools reveled in the rare opportunity to test themselves against opponents of equal roster sizes and talent pools.

GirlsBaumholder 1, Florence 1 (Baumholder 2-1 on penalty kicks): A battle of winless teams ended first in confusion, and then in triumph.

Regulation expired on a 1-1 tie game, and the drenched teams exchanged handshakes and gathered their belongings as the next game’s participants replaced them on the sidelines. Moments later, officials summoned the teams back for penalty kicks.

Having already heard a postgame speech lamenting missed opportunities, the Bucs weren’t about to let another one get past them. Adwoa Sika, a converted defensive specialist who scored Baumholder’s tying goal in regulation, cashed in the Bucs’ first penalty kick. Teammate Ku’uhiaonanai Villarin added the second. Senior goalie Elvia Salazar allowed just one Florence conversion in five kick attempts.

Bucs coach Jill Norris remained wistful that her team had played better, in her estimation, against juggernaut foes like Ramstein and Kaiserslautern in the regular season than they did on Monday, even as she celebrated her team’s first win of the season.

“I told them, ‘You can’t leave it to chance anymore,’” Norris said.

Alconbury 5, Baumholder 1: The Bucs had less success against the tournament’s top seed, which ignored the weather to produce the bracket’s biggest opening-day offensive effort.

Sigonella 1, Menwith Hill 0: The Jaguars are loaded with freshmen and unaccustomed to rain and wind. They won just one game in the regular season.

Their win Monday offered proof that the postseason is a different animal.

Michelle Creollo, one of seven ninth-graders on the team, provided the game’s only score midway through the second half. Creollo wrested possession from the Mustang defense, found some space and converted a goal in what coach Shawn McCarthy called “a great individual effort.”

As a result, a Sigonella team that played four tie games this season earned an elusive victory at the best possible time.

Rota 1, Alconbury 0: The Dragons beat Rota 6-0 when the teams met last month. That didn’t convince the Admirals that they were the inferior team.

On Monday, they made their case.

An aggressive but disciplined Rota defense threw off Alconbury’s vaunted attack, and freshman striker Francesca Santos chased down an open-field ball in the first half to deliver the only goal the Admirals needed.

“The goalie was coming after me,” Santos said of her game-winning score. “So I panicked and kicked.”

Rota 1, Menwith Hill 0: The Admirals geared up for the top-seeded Dragons by nipping another United Kingdom program by the same score.

Brussels 2, Sigonella 0: The defending Division III champions opened their title defense in impressive fashion with a proficient shutout of the Jaguars.

While the Spain-based Admirals had to adjust to the weather, Alconbury has spent the season under similar conditions to Monday’s.

“Other than it being miserable and cold, it’s not affecting the game that much,” Dragons coach Black said.

Brussels 4, Ankara 0: The second-seeded Brigands turned to a pair of star forwards to make their splash on the tournament’s opening day.

Imran Ahmic scored three goals in one of the day’s strongest individual offensive efforts. Fellow senior striker Kristian Javier added a goal of his own and found Ahmic with an impeccably-placed leading pass as Brussels pulled away in the second half.

Baumholder 1, Lajes 1: In their only game of the tournament’s first day, the ninth-seeded Falcons forced a tie with the third-seeded Bucs. Lajes will try to extend its run Tuesday against a cruising Menwith Hill team.

Menwith Hill 4, Ankara 0: The sixth-seeded Mustangs started the day’s most impressive team showing with a shutout of the Trojans.

With the two wins, the Mustangs doubled their win total from a 1-3-3 regular season and equaled the two wins they managed in last year’s European championship tournament.

Sigonella 5, Incirlik 1: The Jaguars, a 2012 European semifinalist, earned their first win of 2013 with a rout of the Hodjas.

Florence bows out: Defending Division III champion Florence did not send a boys team to vie for a repeat European championship. DODDS-Europe athletic director Karen Seadore said the school had a number of key players taking the International Baccalaureate exam and opted not to participate in the tournament.