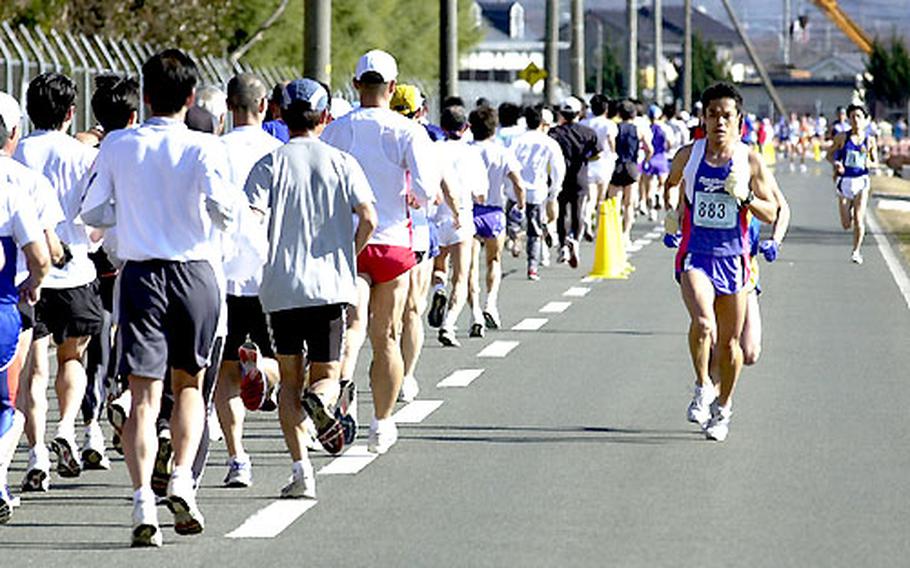 Eiji Yaguchi takes the lead going in one direction, while a pack of runners heads the other way during Sunday&#39;s race. Yaguchi placed third overall among the 2,883 men entered in the event. (Dave Ornauer / S&S)

Eiji Yaguchi takes the lead going in one direction, while a pack of runners heads the other way during Sunday&#39;s race. Yaguchi placed third overall among the 2,883 men entered in the event. (Dave Ornauer / S&S) Men&#39;s winner Takayuki Kawamura grimaces as he extends his lead over Hiroo Yabushita in the home stretch. (Dave Ornauer / S&S) 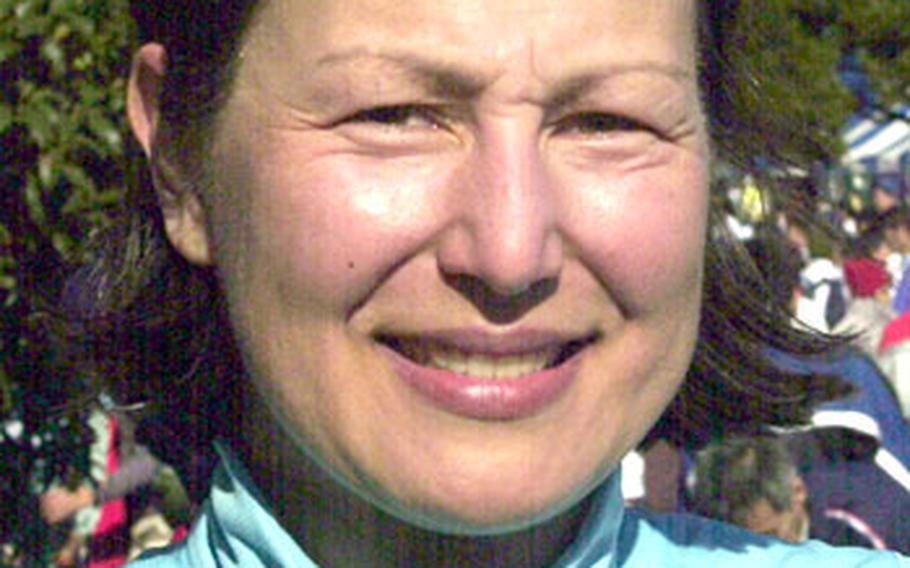 Julie Tabb once more made the Frostbite Foot Race Half-Marathon her personal showcase, three-peating the status of forces agreement women&#8217;s title in the 22nd annual event sponsored by the Yokota Striders Running Club.

The predominantly Japanese field, in the largest road race run on a U.S. base in Japan, was led by women&#8217;s overall winner Yukie Udagawa, timed in 1:23:08. Tabb finished 17:24 behind Udagawa, 50th overall, but well ahead of second-place SOFA finisher Nikki Forrester of Yokota (2:13:25).

The half-marathon field of 3,652 runners was well down from the record of almost 5,000 set two years ago, the last time the event was held at Yokota. It was run last year at Tama Hills Recreation Center, due to security concerns in the wake of Sept. 11.

Including the 1,823 runners entered in the preliminary 3.1-mile run, the Frostbite Foot Race attracted 5,475 competitors, compared to 8,240 two years ago.

A major change to the race course, which snakes around the base&#8217;s flight line perimeter road, was putting cones and dividers up in the road&#8217;s center to separate packs of runners going in opposite directions.

Two years ago, the lead runners ended up running smack into a pack of hundreds of trailing competitors headed in the other direction. That, and the large field of runners in general, almost creating a logjam.