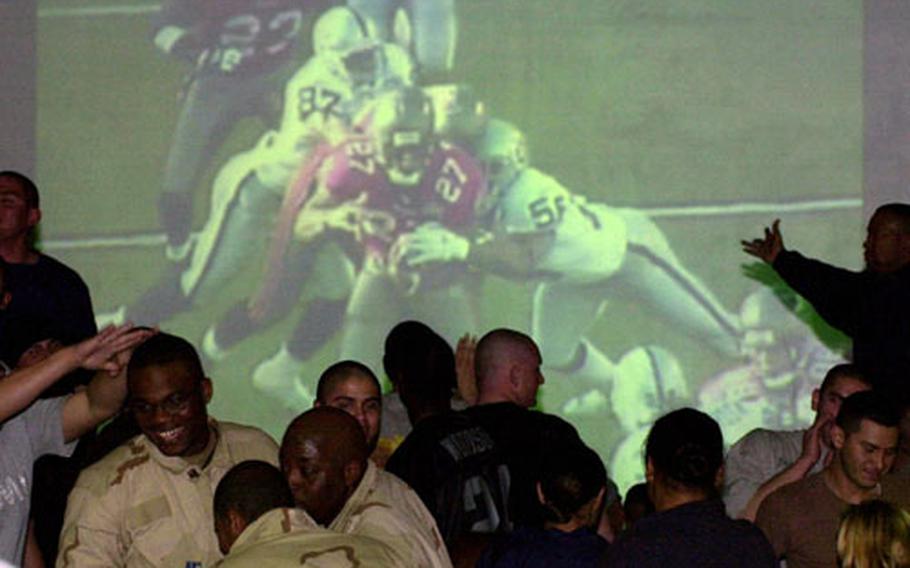 Soldiers at Camp Doha react to the action during Super Bowl XXXVII, broadcast on a big-screen at a former warehouse turned into the base club. (Joseph Giordono / S&S)

Soldiers at Camp Doha react to the action during Super Bowl XXXVII, broadcast on a big-screen at a former warehouse turned into the base club. (Joseph Giordono / S&S) 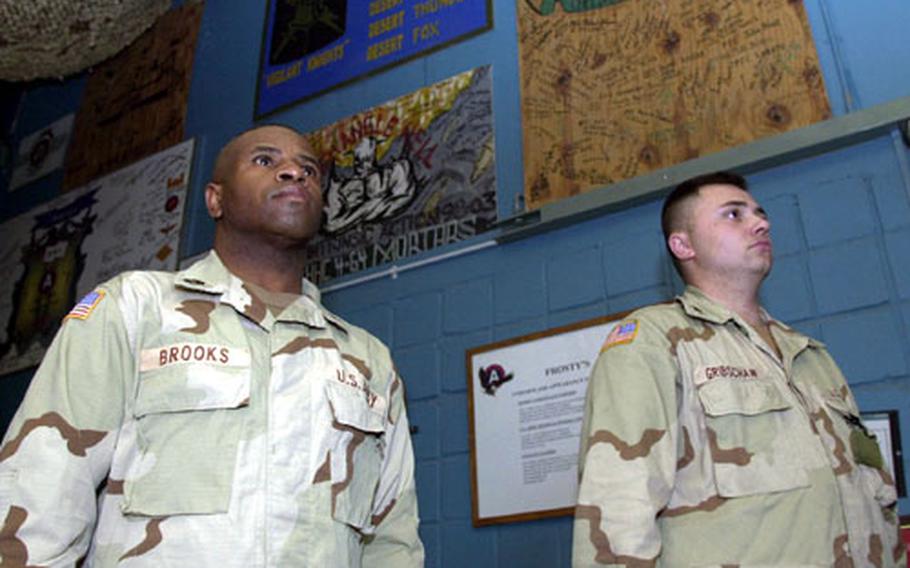 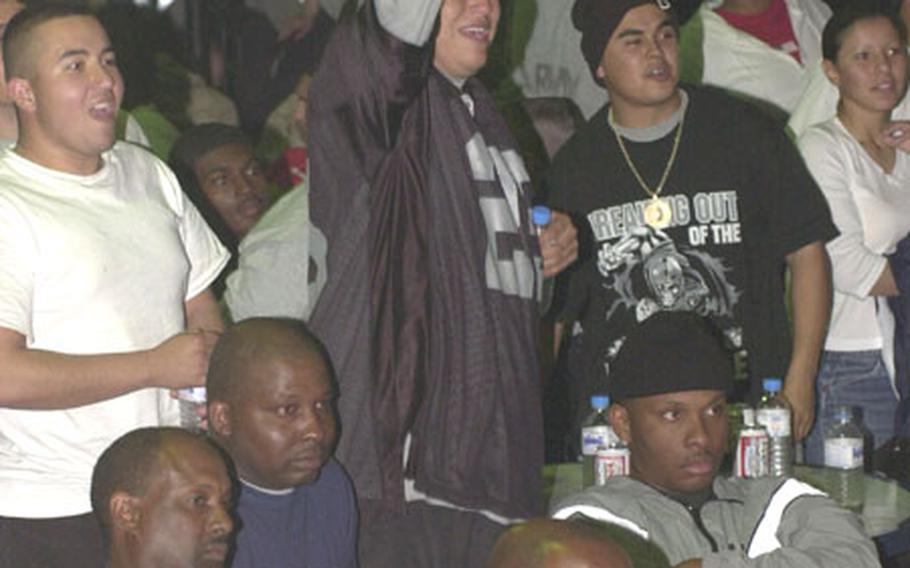 CAMP DOHA, Kuwait &#8212; All eyes were on the big screen broadcasting a football game from halfway across the world. But most of the soldiers&#8217; minds were focused about 50 miles north, to the Iraqi border.

Super Bowl XXXVII kicked off just after 2 a.m. Monday local time, but the soldiers deployed to Kuwait were more anxious to talk about a kickoff of another kind &#8212; a possible showdown with Iraq, where they would likely play front-line offense all the way to Baghdad.

&#8220;I don&#8217;t sit around praying for war, but I want to make this world a better place for my daughter,&#8221; said Spc. Jason Gribschaw, who had just arrived in Kuwait on Sunday morning with the 11th Engineering Battalion, Combat, from Fort Stewart, Ga. He and his wife are expecting their first child, a girl, in May.

Gribschaw, from Irwin, Pa., was among hundreds of U.S. soldiers &#8212; and a handful of airmen &#8212; who packed into Frosty&#8217;s, a Morale, Welfare and Recreation club in a converted warehouse on Camp Doha.

At one end, a projection screen showed a live feed of the game. All around the cavernous building, camouflage netting was draped from the ceiling. The walls were covered with homemade wooden planks commemorating the various units that have been deployed to Doha over the years.

As soldiers walked in the front door, they could see a large board on one wall that presents a brief history of the 10-year U.S. presence at Doha. It was surrounded by the detritus of old wars &#8212; inert 500-pound bombs, rotting Kalashnikovs, metal helmets with holes blown in the crown.

The last time this many troops flowed into the Middle East was Super Bowl XXV, when the U.S. military came to Kuwait&#8217;s rescue and routed an Iraqi occupation force.

Now, thousands of U.S. troops again are pouring into the region for a possible conflict with Iraq over weapons of mass destruction. Officials will not say how many troops are in the area now, but tens of thousands are deploying to &#8220;the Persian Gulf region&#8221; every week.

Sitting near the back of Frosty&#8217;s, Sgt. Keenan Holt of the 3rd Armored Cavalry Regiment, 2nd Squadron from Fort Carson, Colo., sipped a near-beer and munched on popcorn. Asked his opinion about the game, he offered an answer to the unasked question.

The Virginia Beach native laughed, winked, and turned back to watching the game.

A couple tables over, Spc. Charles Hatch, of 1st Battalion, 293rd Infantry, a National Guard unit from Fort Wayne, Ind., was decked out in the Oakland Raiders&#8217; silver and black.

The Super Bowl party was part of a larger effort to provide the troops at Doha with something to take their minds off why they are in Kuwait, officials said.

&#8220;We have a pretty aggressive MWR program here, because it&#8217;s important to give them the opportunity to not think about being far from home,&#8221; said Col. Ulysses Brown, commander of Camp Doha.

He cited a number of amenities, including 24-hour gyms, food courts, movies and athletic programs.

But Brown, who is six months into a two-year command tour, knows that the diversions, especially the Super Bowl, are only temporary.

The game did serve as a welcome distraction for many of the soldiers. While the crowd heavily favored the Oakland Raiders, a hearty bunch of Tampa Bay Buccaneers fans went home happy after Tampa won the game, 48-21.

As the game ended, the sun began to creep over the desert horizon and the first call to Muslim prayers echoed throughout Kuwait City. For most of the soldiers, the Super Bowl break was over quickly.