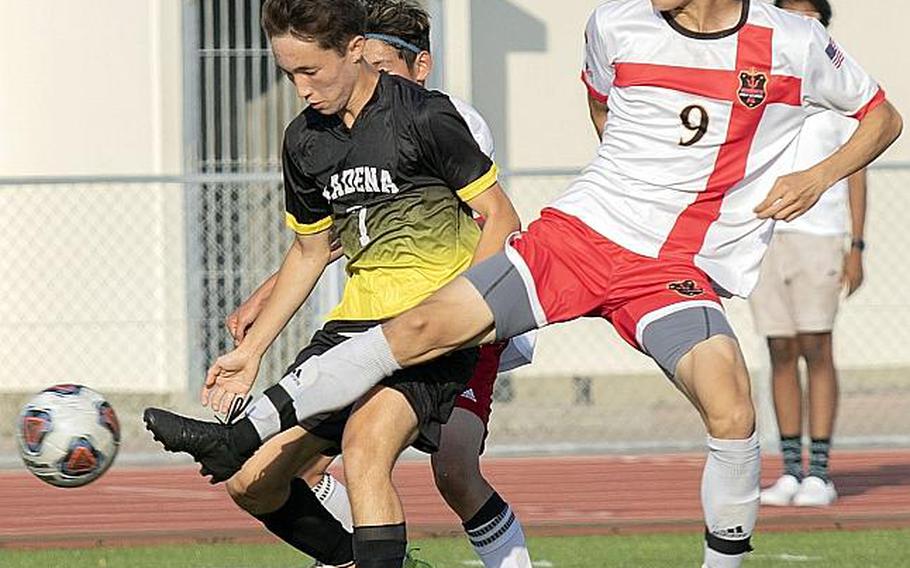 There’s no question Kai Sullivan can put the ball in the net, with his three-year total of 95 goals - including 35 this just-completed season.

But if one looks beyond the statistics and sees where the Nile C. Kinnick junior played throughout an 80-minute match, one can agree with both Sullivan and his coach, Tim Rippeth, that Sullivan is trying to become a more well-rounded Red Devil of a player.

“The soccer IQ he passed along (to teammates) was definitely evident every time we went up against another team,” said Rippeth, who took the helm of a Red Devils team that last season was more of a scoring machine, but this season was “more well-rounded.”

Sure, Sullivan led the team in goals for the third straight season. But he also led Kinnick in assists, with 10, for the first time in his three seasons in red and white.

Sullivan also paced the Red Devils to an 18-3-1 record, a third-place finish in the Perry Cup in March, second in the DODEA-Japan tournament and the first Far East Division I Tournament title in school history.

For all that, plus the Far East Most Valuable Player and Golden Boot awards, Sullivan has been named Stars and Stripes Pacific’s boys soccer Athlete of the Year.

In 2018, “I had a phenomenal midfield giving me good support,” Sullivan said of players like Akimanzi Siibo – who sat out this season with a knee injury – and Joey Hand and Cael Bowen, who combined for 29 assists while Sullivan had 37 goals and seven assists.

This season, “We had a lot of new freshmen come in and they were attack-minded,” Sullivan said.

“I thought it would be a good idea (for them) to experience playing up top. I already had two years up front. I thought I could track back and help the midfield, which was also quite young. Drop back a little bit, help them and have the younger kids get their scoring chances.”

Kinnick didn’t score as many goals as it did last season, but it also came up strong defensively with Far East D-I Best Goalkeeper Nick Burke holding down the back end.

“It felt great to actually get the banner,” said Sullivan, whose Red Devils came in third at Far East the last two seasons. He could feel the pain senior players felt those last two times at Far East.

“To see them suffer through the years we got third, having their heads down, being disappointed that they couldn’t get theirs, it was heartbreaking,” he said. “I really wanted that banner this year. That was the main objective.”