Spangdahlem getting set for new brand of football 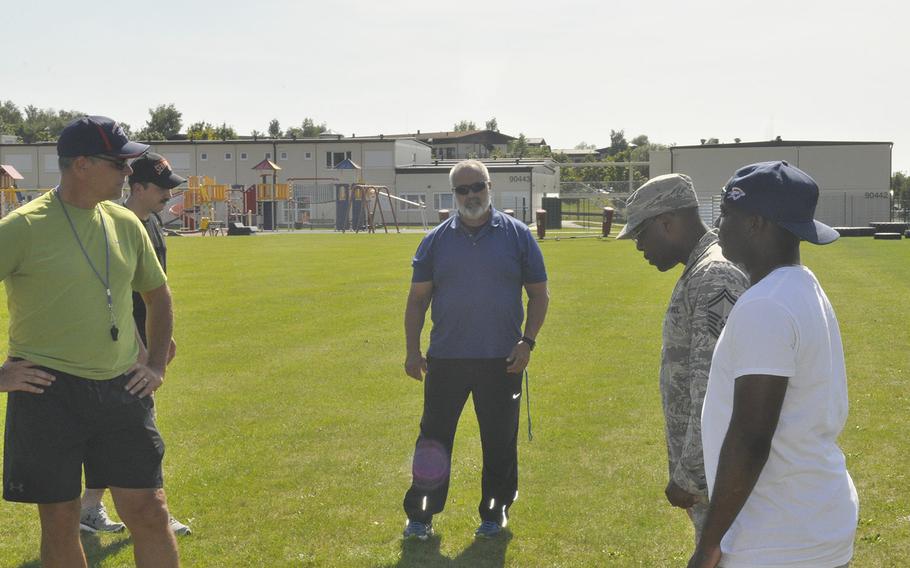 Buy Photo
Head coach Mike Laue, center, talks with the Spangdahlem Sentinels football coaching staff Thursday, Aug. 22, 2019, at Spangdahlem Air Base. Laue, one of DODEA-Europe's most accomplished coaches, returns to the sideline this fall after a one year hiatus. (Gregory Broome/Stars and Stripes)

Buy Photo
Head coach Mike Laue, center, talks with the Spangdahlem Sentinels football coaching staff Thursday, Aug. 22, 2019, at Spangdahlem Air Base. Laue, one of DODEA-Europe's most accomplished coaches, returns to the sideline this fall after a one year hiatus. (Gregory Broome/Stars and Stripes) 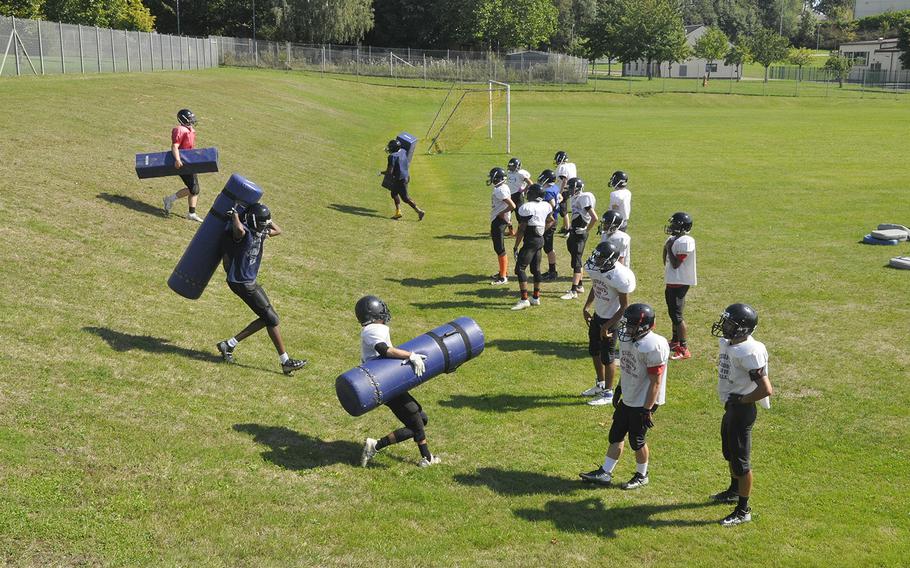 Buy Photo
Spangdahlem Sentinels football players carry pads up and down a steep hill during a preseason practice Thursday, Aug. 22, 2019, at Spangdahlem Air Base. Where the team's practices were more specialized by position during the program's 11-man era, the smaller Sentinel roster is running more team-wide drills to prepare for the six-man game. (Gregory Broome/Stars and Stripes) 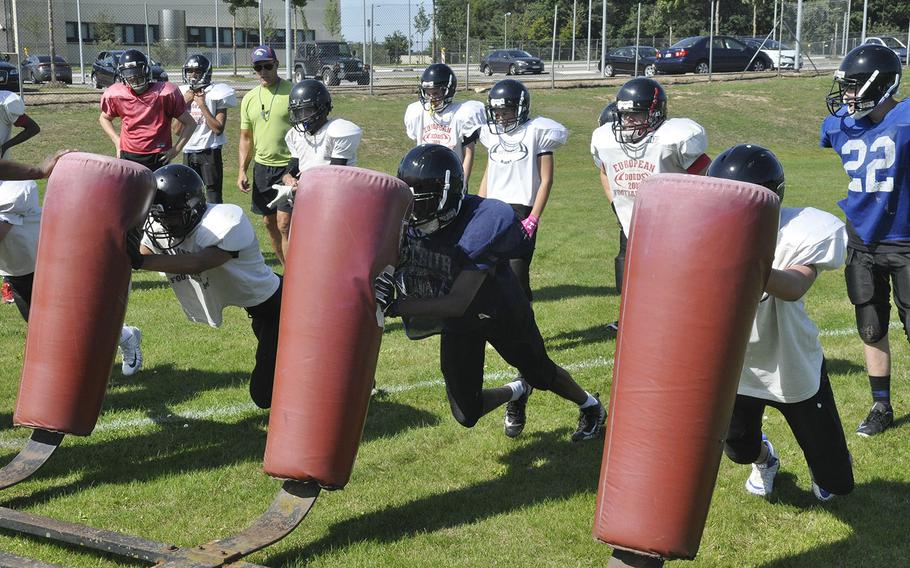 Buy Photo
Spangdahlem Sentinels football players attack a tackling dummy in a preseason practice Thursday, Aug. 22, 2019 at Spangdahlem Air Base. The Sentinels are transitioning from 11-man to six-man football this fall, emphasizing the importance of open-field tackling. (Gregory Broome/Stars and Stripes)

Third in a series of DODEA-Europe high school football previews.

The inevitable has happened.

The Spangdahlem Sentinels, among DODEA-Europe’s most accomplished and consistently successful football programs, are playing six-man football this fall, joining the list of shrinking European programs taking refuge in the burgeoning ranks of Division III.

“That’s just part of the nature of being in DODEA,” said returning head coach Mike Laue, back from a one-year hiatus. “It just is what it is.”

Laue is the architect of much of the program’s past glory in its dynastic run as the Bitburg Barons, as well as a redemptive 2017 title after rebranding as the Spangdahlem Sentinels. Over those dominant years, Laue’s teams became notorious for a grinding, hard-nosed offense built around an overwhelming offensive line and a legion of capable ballcarriers eating up yardage behind them.

As Laue well knows, that approach won’t translate to six-man ball, even if the Sentinels’ dwindling student population still produced enough of the necessary kind of athletes to operate such a system. Six-man ball is all about speed and space; Laue likened the game to “a basketball game on a football field.”

While Laue has some stateside experience coaching football with less than 11 players, he’s not underestimating the magnitude of the adjustment.

“This is a big change,” Laue said. “It’s been awhile since I’ve been around it.”

But Laue and his team are learning to appreciate the democracy of the new game. Where Spangdahlem practices were once more specialized by position and role, players of all sizes are now running through the same drills at the same time as the Sentinels collectively work to fulfill their new mission statement: to create space on offense and take it away on defense. That requires many of the same elemental football skills that have always been key to gridiron success, and Spangdahlem will strive to simply do those things better than their opponents.

“Everybody’s got to be a really good football player all the way around.”