Some D-I teams need to win now to make playoffs 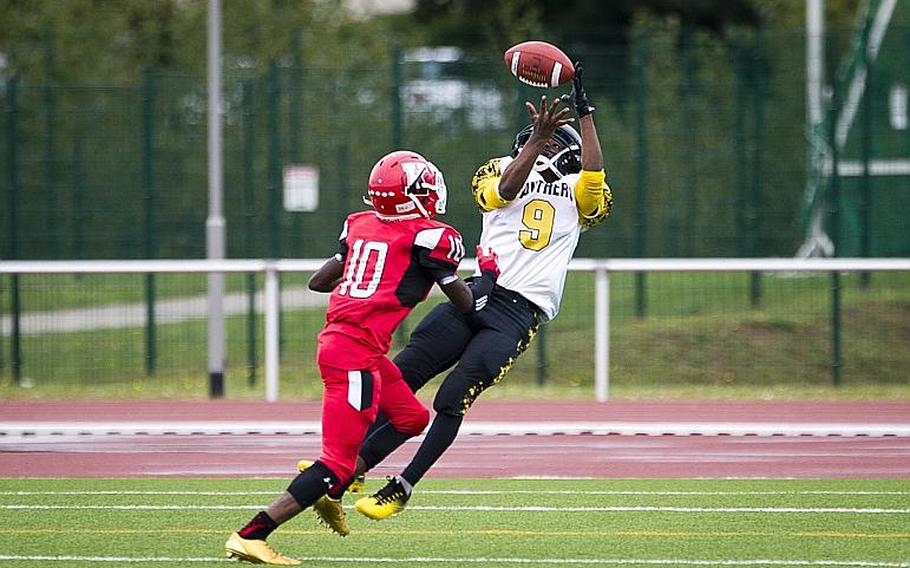 Time is already running out to squeeze into frame in the DODEA-Europe Division I football postseason picture.

DODEA-Europe athletics takes a brief hiatus the weekend of Oct. 7. After that, the division’s six teams will have just two more regular-season games to grasp one of four spots in the Oct. 28 semifinals.

That timeline makes the end of September vitally important. In some cases, this weekend’s games are must-win for aspiring playoff participants.

Division I has broken cleanly so far this season with a pair of unbeaten teams in Stuttgart and Wiesbaden, a pair of winless teams in Lakenheath and Vilseck and archrivals Ramstein and Kaiserslautern occupying the middle at 1-1.

Stuttgart can clinch a winning divisional record with a Friday win over Kaiserslautern, a team it handled rather painlessly in this fall’s non-divisional opening game. The Panthers’ toughest remaining test is an Oct. 13 date with Wiesbaden, by which time Stuttgart might have already clinched a playoff berth.

Wiesbaden has a tougher road, with games against Stuttgart and Ramstein waiting on the other side of the idle Oct. 7 weekend. The Warriors could give themselves some room for error by beating Vilseck on Saturday and take a 3-0 mark into the final stretch.

Defending champion Ramstein saw its repeat chances take a hit with a loss to Stuttgart on Sept. 15. But the Royals got right at the expense of winless Vilseck and may recover further Saturday against Lakenheath; Ramstein beat Lakenheath 36-3 to open the season.

While Lakenheath and Vilseck search for a first win - one will get there at least on Oct. 21, when the teams face off in Germany - Kaiserslautern will either distance itself from the Lancers and Falcons or fall into the cellar alongside them. The Raiders face powerhouse Stuttgart on Friday and Ramstein on Oct. 13.