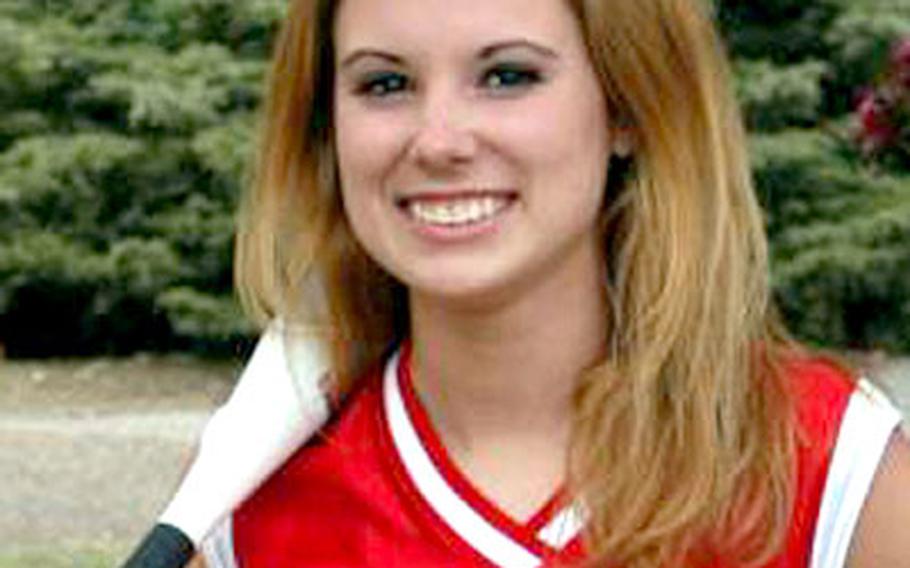 Lakenheath&#39;s Meghan Quasney, a 2002 All-Europe third baseman, will share the pitching duties with Natasha Valley in the tournament. ()

Don&#8217;t blame Ramstein softball coach Kent Grosshuesch for asking as his Lady Royals begin their quest for the European Division I championship at Landstuhl Regional Medical Center. He&#8217;s looking for a cure for his team&#8217;s postseason ills.

For the third straight season, Division I conference champion Ramstein will be taking an unbeaten record (12-0, 10-0 conference) into the European championship tournament Thursday through Saturday. This time, the Lady Royals are hoping to stay unbeaten and end Lakenheath&#8217;s string of three straight European crowns.

The prognosis is good.

Second baseman La Plante has also been an asset in the field, making no errors for a defense that has made just 10 all season.

Morton and Apodaca were instrumental in Saturday&#8217;s 6-0, 6-1 sweep of Wiesbaden, which extended Ramstein&#8217;s regular-season winning streak to 44 games.

Morton went the distance in the opener, extending the team&#8217;s scoreless-inning string to 36 with a no-hitter. That streak ended in the nightcap, when Wiesbaden pushed across an unearned run in the first inning on a hit and an uncharacteristic three errors. Apodaca then one-hit Wiesbaden the rest of her five-inning stint as Ashley La Plante finished up for her fifth save.

Ramstein pitchers have allowed nine runs in 10 league games. The Lady Royals, who have an on-base percentage of .628, scored 128 runs.

Despite the stats, Ramstein knows Lakenheath remains capable of pulling a fourth straight May surprise.

Lakenheath (8-2 in Division I play) rode formidable pitching to its three titles but found itself thin on the mound this season. Lancers coach John Gilmore responded by turning 2002 All-Europe third baseman Meghan Quasney into a pitcher.

Quasney, who did not pitch in the Lancers&#8217; 9-2 and 14-5 losses at Ramstein on April 19, will share most of the pitching duties in the tournament with Natasha Valley, Gilmore said.

Heidelberg, runner-up last season to the Lancers, will have 2002 All-Europe pitcher Meagan Perry, but little pitching depth to help her out.

Wiesbaden, which gave Ramstein and Lakenheath a tough time in regular-season losses, is a possible contender. W&#252;rzburg and Kaiserslautern, each with just one conference victory, probably aren&#8217;t.

It&#8217;s still likely to come down to Lakenheath and Ramstein.

Bitburg, led by 2002 All-Europe pitcher Tanja Moore and freshman pitcher Ashley Kazimer, is a three-time defending champion. It will likely battle Patch in the four-team Division II field, counting on its mound prowess and the hitting of Kaitlyn Phillips, Julie Brei-Crawley and Amy Hughen.

Patch, which handed the Lady Barons their lone league loss this season, and AFNORTH are waiting in the wings should Bitburg stumble.

Alconbury&#8217;s Dragons return to defend their D-3 crown in the most geographically diverse and most unpredictable event.

Always-powerful Rota, champion in 2000 and 2001, will battle the Dragons, III-South champion Baumholder, Giessen, Lajes and London Central for the small schools crown.