Softball: Patience at plate is key for Ramstein 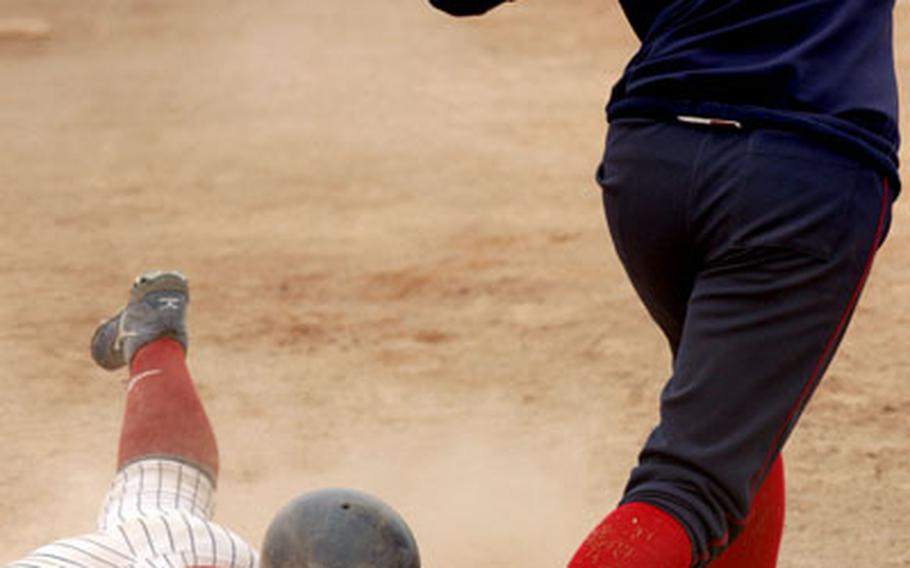 Lakenheath’s Lisa McBride dives into first as the ball gets away from Bitburg’s Amber Zgovina on Saturday. Lakenheath won, 3-2. (Ben Murray / S&S)

Ramstein, resigned to a second-place Division I league finish the previous Saturday after splitting with conference champion Lakenheath, rebounded Saturday to sweep neighborhood rival Kaiserslautern 14-4 and 8-6 at Kaiserslautern.

Walks were crucial in the outcomes: Kaiserslautern received just one free pass in the opener and none in the nightcap. Ramstein, meanwhile, drew seven walks in the first game and 10 in the second.

Kirstin Burns and Kayla Haven, who each struck out six, picked up the pitching victories for Ramstein (8-2 overall, 6-2 in D-I). The Lady Royals got triples in the opener from Burns and Brandy Hale and a double from Marly Hancock.

Emily Badstibner and kaylin Hesler hit triples in Kaiserslautern (2-6, 0-6) cictory in the second game. Badstibner had two triples on the day.

In other high school softball over the weekend:

Rebecca Groff picked up both victories over Bitburg, Saturday&#8217;s 3-2 decision and Friday&#8217;s 14-6 romp. Both of Groff&#8217;s games were two-hitters; she fanned eight on Friday and seven on Saturday.

On Saturday, the Lancers completed their second three-inning run-rule victory in as many days over D-II Baumholder, 18-3. Lakenheath romped 24-3 on Friday.

Ali Parkerson, who allowed just one hit on Saturday, won both games against Baumholder.

London Central 23, Lakenheath JV 6: At Lakenheath, Alexis White ran her season record to 6-2 and went 3-for-3 at the plate on Saturday. The euphoria of victory didn&#8217;t last long, however, as the Lady Bobcats dropped a 15-3 decision to Bitburg later in the day.