Smaller schools have challenges on mat 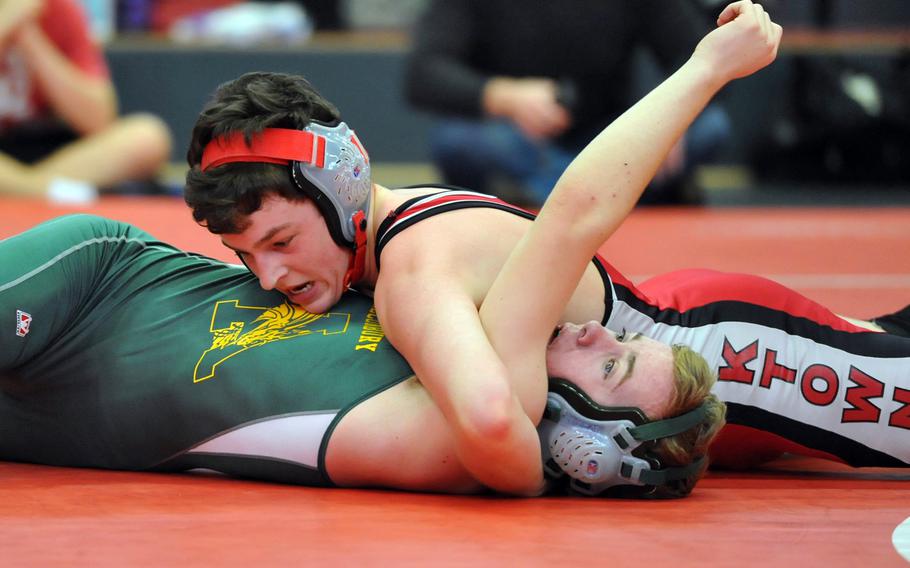 The organization of a wrestling meet is a straightforward task. Wrestlers are weighed and slotted into an appropriate bracket, where they face opponents of the same weight class. It is one of sports’ fairest playing fields.

On a continent-wide level, however, no such easy and equitable arrangement exists.

The fortunes of DODDS-Europe Division II and III wrestling programs are profoundly affected by a muddled mix of circumstances well beyond their control. Schools from each region face their own unique collection of obstacles and specific challenges.

Though it’s an oversimplification, the problem can be summarized like this: North of the Alps, a small-school wrestling team can’t win; in Italy, a small-school team always does.

Germany is the home of all but one of DODDS-Europe’s Division I athletics programs. Huge wrestling teams from Patch, Ramstein, Vilseck, Wiesbaden and Kaiserslautern plod through the country with deep, formidable rosters, leaving little sunlight for smaller programs like Baumholder, Bitburg and Ansbach.

Individual standouts from those schools have the same chance as their Division I opponents to survive their brackets and win top places in their respective weight classes. But with the Division I schools fielding rosters that dwarf their own, Division II schools in Germany have virtually no mathematical chance of ever recording a team victory.

As a close neighbor to Ramstein, Kaiserslautern and Wiesbaden, Baumholder is painfully familiar with this situation. Its teams are routinely trounced by the Royals, Raiders and Warriors in all sports but football, where a strict intra-divisional schedule prevents such mismatches. In all other sports, schedules are designed to minimize travel time and expense, leaving the tiny Bucs with an overwhelmingly difficult schedule.

According to Jan. 17 DODEA attendance figures, Wiesbaden has 654 students, Kaiserslautern has 833 and Ramstein is the most populous of DODDS-Europe schools with 949 enrollees. Baumholder Middle/High School, meanwhile, has 219 students, of which only 134 are in ninth grade or above.

The Bucs have made significant internal strides this season. Head coach James Copley said his team’s roster has grown from eight last year to 17 this season, including five returnees. That returning “foundation” and fresh talent has elevated the program, Copley said.

“We’ve been able to alter what and how we teach,” Copley said. “We’ve begun transitioning our wrestlers from simply those with basic knowledge to wrestlers who are able to apply finesse” and “finish more complicated moves.”

But that progress hasn’t been rewarded with team victories. The Bucs have finished behind Division I teams in all three of their meets so far this season. On two occasions, they’ve finished second to the only Division I team in the field, including a second-place finish to defending Division I champion Ramstein last Saturday. On Dec. 7, the Bucs finished fourth behind Wiesbaden, Ramstein and Kaiserslautern, while ahead of Division II foes AFNORTH and Bitburg.

Copley said his wrestlers welcome the rigorous competition, but admitted the inevitable losing has an impact on team morale.

“Second place is a big jump from the last place that Baumholder took in every tournament last year, but it’s still not first place,” Copley said. “And it most likely never will be the way the system is set up.”

Division II teams from northern Germany and the United Kingdom, meanwhile, are in a similar predicament. Teams such as Alconbury, AFNORTH, SHAPE and Brussels intermingle with the German Division I teams in at least a meet or two each season. And even their more regionally-focused meets are invariably dominated by Lakenheath, the only Division I team outside of Germany. The Lancers have a roster that dwarfs their smaller neighbors: on Dec. 7, Lakenheath’s 238-point total doubled runner-up SHAPE’s 112-point showing, while Alconbury and Brussels finished third and fourth in the four-team meet.

DODDS-Europe’s five Italian programs - Aviano, Naples, Vicenza, Sigonella and American Overseas School of Rome – wrestle exclusively amongst themselves for the entirety of the five-week regular season. That means one lower-division Italian school will claim a team victory every week, and winning team meets is a reasonable goal for most teams to set.

But the attainability of that success can have negative consequences once the regular season ends. The sudden expansion of competition at the European tournament can be overwhelming for the Italian contingent, especially for those in weight classes where there’s little competition in the regular season.

Aviano coach Rob Clement would prefer that his wrestlers get a more comprehensive look at their European counterparts before meeting them in the postseason.

“It would be great if we could have at least one meet per season that would include teams from Germany,” Clement said. “But with budget restrictions that may not happen again.”

In theory, the mystery works both ways: wrestlers from the north are just as vulnerable to surprise challengers from the south as the reverse. But there are far more teams in the north, and thus more opponents for the Italian wrestlers to discover for the first time in the postseason. And Italy doesn’t have any Division I schools, where most of the continent’s top wrestlers are produced, so the phenomenon largely occurs in only one direction.

Wrestlers from Division I programs took 10 of 14 individual European championships last season. Patch had four champions, Ramstein had three, and Wiesbaden, Lakenheath and Vilseck had one apiece. Division I wrestlers also finished second in 10 weight classes.

DODDS-Europe does crown a separate European team champion in each division, offering some opportunity for team success. But even that is skewed by geography.

Last year, Division I teams piled into three of four sectional qualifiers, leaving wrestlers from Division II teams outside of Italy with a far tougher road to Europeans. The sectional at Aviano, meanwhile, added only Division II school Black Forest Academy to the usual all-Italy mix.

As a result, the already-small rosters of northern Division II schools were trimmed even further ahead of the European tournament, minimizing the significance of the team points race.

In the absence of pure divisional competition, coaches are left to focus their wrestlers on what they can control. Details like country, division and school fall away when one wrestler locks up with another.

“Even a school with one wrestler has the potential for the wrestler to be a European champion,” Copley said.

“I tell my wrestlers that they only have to take on one wrestler at a time on the mat,” Clement said. “And the size of their school isn’t necessarily a measure of ability.”