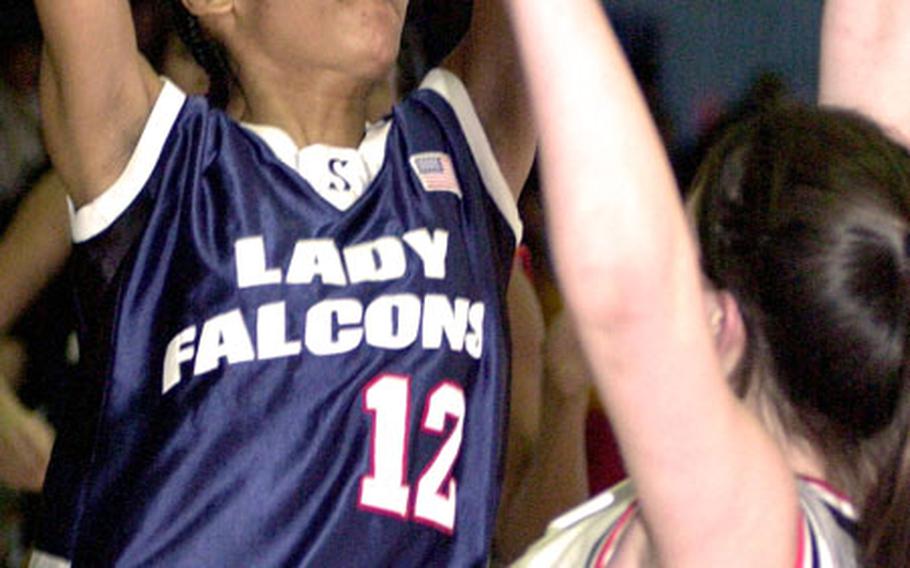 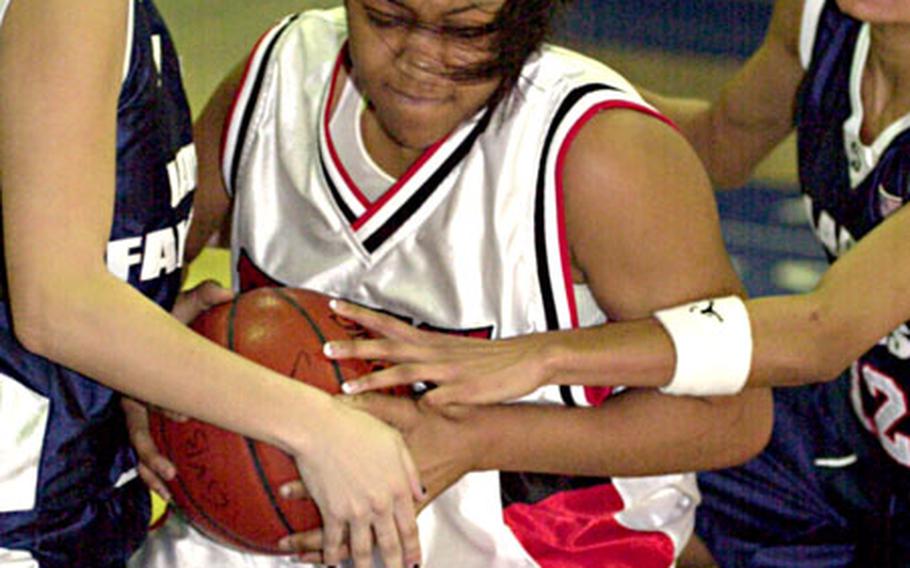 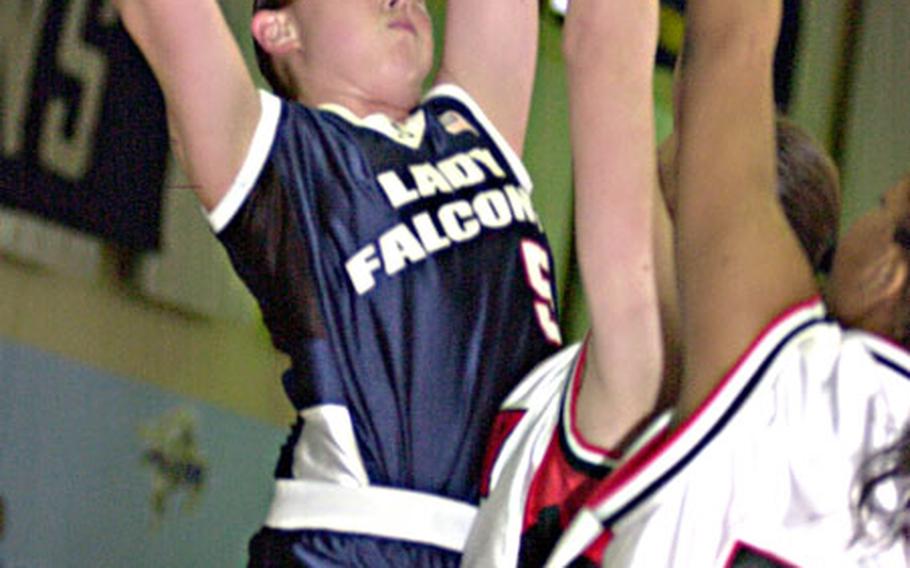 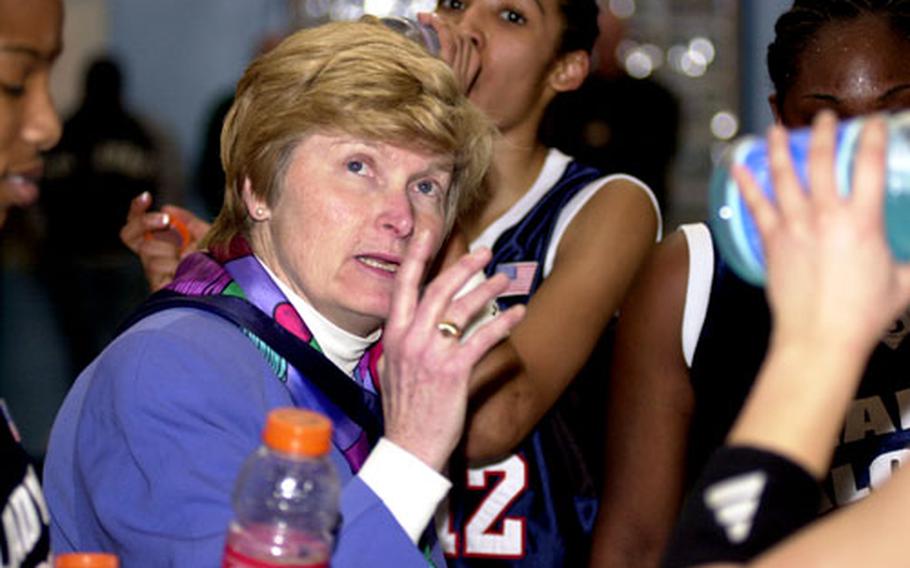 Seoul American coach Charlotte Hicks gazes at the clock while instructing her players during a timeout in Saturday&#39;s championship game. The Falcons gave Hicks her first title in 19 years as coach. (Dave Ornauer / S&S) 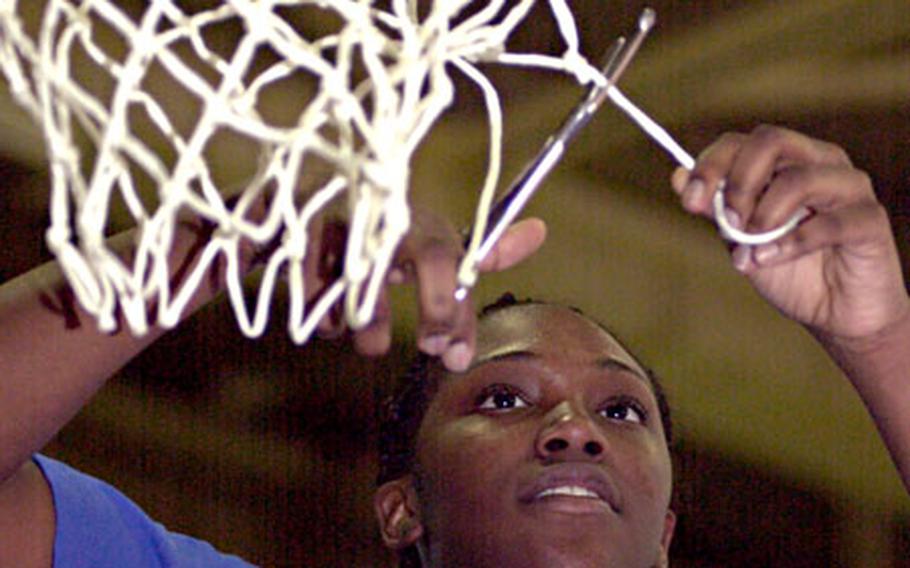 YONGSAN GARRISON, South Korea &#8212; The long wait is over for coach Charlotte Hicks and the Seoul American Falcons.

MVP Janel Daniels scored 27 points, including two crucial three-point plays in the second-half, as the Falcons rallied past Nile C. Kinnick of Japan 60-48 on Saturday in the title game of the Far East High School Girls Class AA Basketball Tournament.

It was the second Class AA championship for Seoul American, but its first in 21 years. After 19 years at the Falcons&#8217; helm, Hicks won her first Far East title. And it broke a string of seven straight third-place finishes for Seoul American.

Hicks said she had had no doubt that her team could win.

That joy resulted from a rally after Kinnick, opening with a suffocating 3-2 zone press, forced turnovers and converted them into easy layups for a 13-5 lead with 2:14 left in the first quarter.

From there, Hicks stressed &#8220;passing and patience&#8221; to overcome the pressure, while the Falcons blanketed the Red Devils&#8217; shooting guards and ballhandlers with a 2-1-2 zone and sent Daniels and junior Chivonne Floyd inside to crash the boards against the shorter Devils.

Daniels gave the Falcons their biggest lead, 50-35, on a rebound putback with 6:20 left. Twice down the stretch the Red Devils rallied, but Daniels squelched the uprisings with three-point plays each time.

Rebounding and keeping their defensive assignments were not there, meanwhile, for Kinnick, coach Henry Falk said.

Falk was nonetheless happy with the accomplishments of a team that held the second-best record in Japan this season.

As were the Falcons, who cut down the net cords at each basket following the game to the cheers of a home crowd of about 600.

Notes: Seoul American&#8217;s previous championship came in 1984, as coach Tom Gartside and sophomore MVP Gloria Peele led the Falcons to a 54-41 triumph over American School In Japan at Yokota High School in Japan. &#8230; Daniels becomes the second Falcon named MVP in the 30-year history of the tournament. &#8230; The outcome continued a trend of home-court success that began in 1986. Host teams have reached Center Court 14 times and won nine of them, including the last four in a row; Kubasaki won in 2002 and last year, while Kadena won in 2003. &#8230; Seoul American teams have hosted Far East tournaments the last three years and won all three titles. The boys vanquished Kubasaki of Okinawa in 2003 and Kinnick a season ago, giving the school four total Class AA crowns.